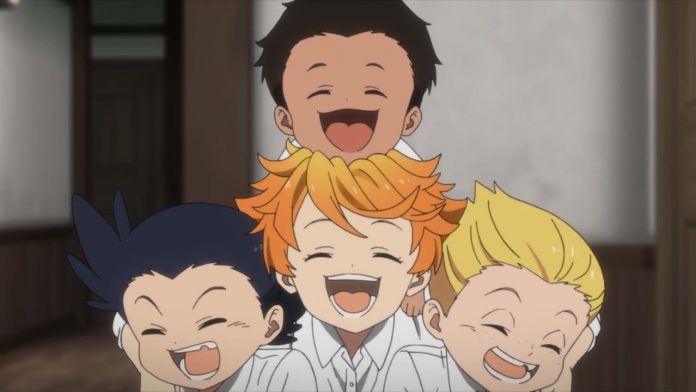 *This article was written by VLord*

Among my many interests in anime and manga, few usurp my love for Weekly Shonen Jump. Whether it’s the fascinating psychology of Act-Age or the hot-blood action of Black Clover, I always find myself drawn to its titles as well as the core values of “friendship,” “effort,” and “victory” that they embody. As such, I was over the moon when I heard the news that Toonami had picked up The Promised Neverland, especially so soon after its Japanese broadcast. With the show premiering on the block on April 13, let’s explore the series’ history and what makes it such an exciting show to have on the block.

The Promised Neverland focuses on its heroine Emma and her friends Norman and Ray, who all live seemingly happy lives at the Grace Field orphanage. Unfortunately, their peaceful lives are shattered when they learn the orphanage’s secret, and a race against time begins for their survival. Starting as a manga in Weekly Shonen Jump in August 2016, the series was praised for its intricate world, dark tone, and intriguing mystery elements. While many recently successful series in the magazine has taken a considerable amount of time to attract their readership, Neverland broke from this trend by drawing readers immediately into its story. The series even gained traction internationally, with Viz Media’s English-language Shonen Jump magazine immediately acquiring it for weekly serialization following its Jump Start preview run. From the offset, The Promised Neverland proved that it was indeed something special to behold.

A common observation about The Promised Neverland is that it is “Non-Jump”-like in nature, and while I feel this ignores the existing diversity in Jump’s lineup and Neverland’s core themes, this does ring true. Prior to his debut Shonen Jump+ one-shot, The Whereabouts of Ashley Goeth in 2015, manga writer Kaiu Shirai had no involvement with the manga industry nor any professional writing experience. Struggling many times to get published through various means, the original 300-page manuscript of The Promised Neverland that he submitted to Weekly Shonen Jump was intended to be Shirai’s final attempt at entering the manga industry. To his surprise, Shirai’s future editor Takushi Sugita was blown away by his storytelling, and immediately advocated for him to be serialized. While it isn’t odd for Jump to seek outside talent, someone of Shirai’s background getting published is quite astounding. Shirai had something that the magazine lacked, an outside perspective not built off the traditional literary practice or strong ties to Jump, and that made him the perfect person to help with Shonen Jump’s pursuit of diversity. That being said, given Shirai’s limited artistic ability, it was clear that he would not be able to handle a weekly serialization by himself. As such, Sugita quickly partnered Shirai with popular Pixiv artist Posuka Demizu. Like Shirai, Demizu was not the type of person you’d expect to see in Jump normally. While she had prior publication experience with Shogakukan’s Coro Coro Comic and Televi-kun magazines, Demizu had not worked on a series of Neverland’s scale before. Still, Demizu’s artwork had proven her ability to depict a variety of detailed character designs and environments, making her a perfect match for Shirai’s story. Just as Shirai’s writing would captivate readers, Demizu’s art would bring in new fans who were entranced by its visuals. With such a unique duo, it was no surprise that The Promised Neverland quickly gained the attention of Jump readers worldwide.

While Neverland can be paired down to a mystery-thriller, it also takes numerous elements from action and horror as well. In a 2017 interview with Shu Play News, Shirai noted his primary influences to be Hirohiko Araki (JoJo’s Bizarre Adventure), Naoki Urasawa (Monster), Takeshi Obata (Death Note), and Yusei Matsui (Neuro: Supernatural Detective). For those familiar with these four mangaka, there’s not many common narrative trends shared among them. Instead, Shirai uses these inspirations to form his own distinct style that is not confined to a single genre, but rather an amalgamation of several. Shirai’s approach has allowed the series to shift between classic action, ominous horror, and strategic conflict all while feeling cohesive to the overall story. The series’ variety additionally plays into the unpredictability of the series, with Shirai crafting twist and turns in the plot that can dramatically change the overall tone. The world of The Promised Neverland feels like it goes beyond our imaginations, and Shirai masterfully conveys that through his storytelling.

It’s 5am in Ireland but now I can’t sleep because The Promised Neverland trailer dropped! I love the kids of Grace Field House so much and I can’t wait for you all to meat Emma 🥰 pic.twitter.com/hwcusWk55l

Another unique aspect of the series is the prominence of its main character Emma. Presently, Emma is only one of two female protagonists within the pages of Weekly Shonen Jump, making her immediately stand out among the magazine’s male-dominant leads. That being said, the draw of Emma is how her ideology and personality conflict with the world around her. The Promised Neverland is not a happy series by any means, but Emma serves as an optimistic voice within the brutal world that she and her friends inhabit. Emma’s struggle to maintain her ideology despite the many hardships she faces is a part of what makes Neverland’s story so fascinating and contributes to the rising tension in the series, as the stakes continue to grow higher.

When The Promised Neverland was greenlit for an anime adaption, it was obvious that it was going to get some top tier treatment. Aniplex subsidiary studio CloverWorks was chosen to handle the production, and the series even got a timeslot on Fuji TV’s popular Noitamina animation block. Helming the adaption as director was Mamoru Kanbe, most notably recognized for his directorial work on the anime adaption of Elfen Lied. While the anime is faithful to the story of the manga, Kanbe’s team decided to place a more significant focus on the horror aspects of the series, re-framing many scenes to convey a more suspenseful tone. These directorial liberties allow the anime to feel like a new experience even to veteran fans of the manga, making it worth your time regardless of which interpretation you prefer. Additional credit should also be given to character designer Kazuaki Shimada who, albeit with some streamlining, has managed to capture Demizu’s versatile characters designs. Lastly, Takahiro Obata’s music score for the series is praiseworthy, pairing well with varying emotional tonal shifts associated with the series. All in all, the anime does a solid job of transitioning the original manga into animation, while also carving out its own identity in the process.

The Promised Neverland will definitely stick out among the action-heavy shows that fill up the rest of Toonami. That being said, the series’ outlier position on the block will also be to its advantage. To look at a previous Toonami horror anime, Parasyte managed to be very successful in spite of its comparatively subdued narrative. While Neverland’s treatment of horror is quite different and is less action-oriented, I believe that it will attract the same audience that was drawn to Parasyte’s approach. Both shows use the strength of their characters and stories to engage viewers rather than the spectacle of fights. What Neverland lacks in action, it makes up for in its narrative qualities, and that will be the show’s most powerful weapon. I would not be surprised if we see The Promised Neverland gain a cult following among Toonami’s viewership, making its premiere all the more exciting.

Many Toonami fans have shown disdain for the large amount Jump titles that show up on the block, and while I sympathize with people’s desire for content from a different source, I believe that The Promised Neverland will provide the new kind of experience that they are seeking. There aren’t many series out there like The Promised Neverland, and that in itself will surely suck Toonami viewers in. Get ready for rollercoaster of emotions and suspense as we see the series unfold on the block in the coming weeks!

Aside from reading manga VLord also is a contributor to All-Comic.com. Feel free to follow VLord on Twitter @VLordGTZ