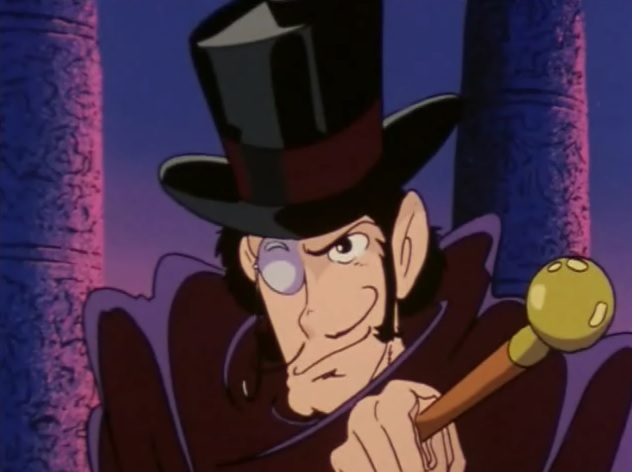 We all know the character: impeccably dressed, charming, part crime-solving and part criminal, with a penchant for stealing rare objects from select wealthy targets, usually to right a wrong but also for the challenge. He’s the gentleman thief who takes for the thrill of it and lives by a code of honor.

If you are picturing Lupin III, then you wouldn’t be wrong; however, the archetype of the gentleman thief certainly did not originate with Toonami’s beloved rogue. As his name implies, Lupin is the third who bears the name Arsene Lupin, and according to the creator Monkey Punch is the grandson of the original character created by French novelist Maurice Leblanc.

Arsene Lupin first appeared in 1905 in Leblanc’s short story “The Arrest of Arsene Lupin.” A master of disguise, Lupin is a debonair jewel thief operating on the wrong side of the law, ostensibly as a force for good. This “gentleman burglar” is always one step ahead of the law. The villains he encounters are inevitably worse criminals than he is, and he defeats these opponents in the brazen manner characteristic of his personality. As part of his unique flair, he sends a calling card (in advance) stating what he intends to steal. He is a prince of romance, seducing not only the eligible ladies but also the reader who sympathizes with this lovable rogue as a “justified criminal.”

In 1932 Hollywood adapted Lupin for the big screen, with a famous classic film actor John Barrymore portraying the lead character. The film Arsene Lupin has several notable elements familiar to Lupin III fans. Lupin, known to the audience as a duke, is pursued obsessively by a hapless police detective named Guerchard, who always seems to be one step behind the jewel thief. Arsene is seduced by the sexy Countess Sofie, who has her own motives for going after the renowned burglar. He announces his intention to steal from a rich man, revealed later to be a war profiteer. Through an elaborate ploy and a series of misdirections, Lupin serves up the criminal to Guerchard, while narrowly escaping capture by employing the art of disguise.

Japanese manga artist Kazuhiko Katō, inspired by Leblanc’s Lupin, created Lupin III in 1965, a comedy-adventure series with elements of the original character. Published under the pen name Monkey Punch, Lupin III emerged wearing a flashy red jacket, fun-loving and obsessed with women, bordering on the hedonistic lifestyle. And despite going to great lengths to address injustice, he is firmly committed to his criminal activities; in fact, he is well-known as the world’s foremost thief.

Longtime fans of Lupin III will note that his character has evolved over the decades, and I don’t just mean the color of his jackets. Earlier versions of Lupin portrayed a somewhat twisted character who does what he wants without any remorse over the consequences. His “chivalry” tended to revolve around helping beautiful women and had no qualms about engaging in violence as a means to an end. Over the years, Lupin became more the gallant hero rather than ruthless criminal, though sometimes included elements of both.

The change of Lupin’s character into a noble rogue could arguably be attributed to his portrayal in the 1979 film The Castle of Cagliostro. Known as the film debut for award-winning director Hayao Miyazaki, Cagliostro features an easygoing and honorable Lupin rather than a lecherous womanizer, who seeks to rescue the damsel in distress Clarisse from a forced marriage to the wicked count. The sexual innuendos are significantly toned down; even the erotic femme fatale Fujiko Mine appears modest and demure. Miyazaki focused more on the storytelling and adventure elements rather than Lupin’s more belligerent persona. Though the characterization conflicts with his typical behavior in the previous series, the director viewed this as him maturing into his namesake, the original Arsene Lupin. Another notable connection to Leblanc’s Lupin is the use of the name Cagliostro for the villain. In the story, La Comtesse de Cagliostro Lupin’s arch-enemy and lover is none other than Joséphine Balsamo, the (alleged) granddaughter of Joseph Balsamo, Cagliostro himself.

The happy-go-lucky and heroic Lupin III also appears in Lupin the Third Part IV: The Italian Adventure, which aired on Toonami in 2016. Here we see “a unification of all the Lupin styles”: part comical, part dangerous and bizarre, and while still a thief with a “heart of gold.”

While many of these characteristics of the original Arsene Lupin are recognizable in Lupin III, they are generally accepted as part of the “gentleman thief” archetype found in literature, film, and anime over the years. Some notable examples are Leslie Charteris’s Simon Templar, also known as “the Saint” in both novels and film, lady thief Carmen Sandiego, and “the Phantom” of the 1963 film The Pink Panther. While each of these figures would include common elements of the trope, they all had style and panache unique to their characters.

Anime has embraced the trope as well. Kaitō (gentleman thief) appear in several known series, such as Kaito Kuroba, also known as the “Kaitō Kid,” the main character of Magic Kaito and a recurring character in Detective Conan, and Clara, better known as the phantom thief Psiren, from the first anime adaptation of Fullmetal Alchemist.

Regardless of the incarnations of this popular archetype, Lupin III remains a beloved character to manga, anime, and Toonami fans everywhere. He is intelligent but has a child-like sense of humor, he loves fancy gadgets and gimmicks (e.g., a gun that shoots a “bang” sign”), and is a flagrant womanizer, though forever in pursuit of the enigmatic Fujiko Mine. Along with his sharp-shooter pal Jigen and the sword-wielding samurai Goemon, I hope to see Lupin continue righting wrongs and stealing priceless treasures while chuckling that iconic laugh.