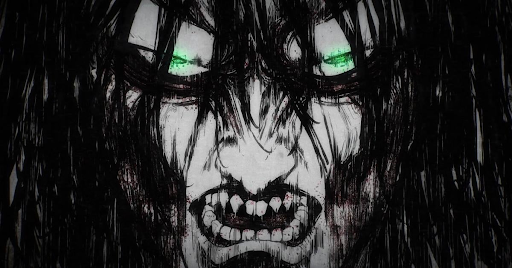 Eren Yaeger’s shocking face-heel turn gave Attack on Titan one of the most unexpected twists to a unique story. Long has this series moved from the standard, humanity vs. titans narrative and has since transitioned to a more nuanced story in what some might say thematically show how devastating revenge and war can be. And all of this comes to a head in part two of the final season, where Eren and Zeke activate the Founding Titan’s power (thanks, Gabi) but not without betrayal and revealing hidden Titan powers that gave Attack on Titan even more “oomph.” For Toonami viewers (and even anime-only fans), we are heading to a climactic finish to the acclaimed series that has had even more buzz because of Eren. As true intentions come to light, viewers realize Eren is willing to do whatever it takes to protect the subjects of Ymir, and the world is not safe from his wrath, especially when we find out what has happened to his ancestors through the years. But how can we view Eren’s decisions that have led to a large amount of bloodshed? And considering how the story has developed, shouldn’t we have caught on from the beginning?

In the episode “Memories of the Future,” the Yaeger brothers travel through their father’s memories as Zeke hopes to save Eren from Grisha’s brainwashing. Which is something that many fans would probably agree with, considering what we knew about Grisha at the time. His poor treatment of Zeke, and his murder of the Reiss family (more on this later) led many to believe that Grisha was the one pulling the strings that caused much suffering for Eren and his friends. After all, the beginning of Attack on Titan focused on reaching the basement of Eren’s home, where Grisha worked. Zeke believes Eren blindly follows Grisha’s will due to the cookie crumbs that he and the series left behind for us to interpret. But Zeke (and the rest of us) will later learn a hidden power of the Attack Titan where possessors (of this titan) can see memories of future inheritors!

So while many fans might groan at a clip episode (when this new power was being first explained), it helps immensely in setting what memories offer the answer sheet to the questions many have had since the beginning of the series. It was an ingenious idea to not only go back to past episodes, but to show a lot of missing context to break open what was really happening. There’s a reason Eren and Zeke traveled back to see certain instances from past seasons that many could find meaningless or a stall tactic (for the studio) in the story of Attack on Titan. And I can’t help but applaud how well this series ties everything together.

And the memory that blew everything we knew to pieces was when the two watched the Colossal and Armored Titans breach Wall Maria. They observe Grisha pleading with Frieda Reiss to help save their fellow Eldians from this attack. When Frieda upholds the vow to renounce war despite being the victim of this current assault, Grisha hesitates to steal the Founding Titan, vastly different from what viewers initially thought had happened. Low and behold, Eren interfered, giving his father the motivation (the death of his sister, family, and comrades) to complete his mission, ruthlessly murdering everyone. Eren’s expressions in this scene created such intensity and disbelief, showing this is someone who heartlessly accepts the death of innocents to make sure events play out in his favor. And it cannot be understated how wild of a revelation this was.

Grisha was written like this all-knowing character, holding all cards and carefully playing whatever he needed to advance his agenda. Yet, Eren (which is still hard to believe) forced Grisha’s hand and got everything he wanted. And we see this more in the episode “Attack Titan” (back in the third season); before “The Owl” passes the Attack Titan to Grisha, he says, “You must see this through. Complete your mission and save Mikasa and Armin.” “The Owl” unknowingly speaks from Eren’s memories, which makes the storytelling of Attack on Titan impressive because viewers realize clues have been in plain sight. From the beginning, I was puzzled on the reason Grisha transferred the Attack and Founding Titan to Eren but it couldn’t be more clear now. Everything that has transpired has been Eren’s doing from the start, setting every event in motion leading up to this crazy reveal (resembling a similar approach that occurred in WandaVision).

But how did Eren switch from a simple child wanting revenge on titans to masterminding potential genocide to anyone who isn’t an Eldian? What sparked this change in Eren came during the episode “The Other Side of the Wall,” where Eren kissed Historia’s hand at the award ceremony, activating Eren’s ability to see the Rumbling in the future. From this moment, Eren began to morph from a reckless boy ready to charge in, to a calculated architect of events who wanted to make sure this future happened. It’s still unclear why Eren chose to keep his friends out of the loop, but it may be a part of this plan not to include members of the Scout Regiment, ensuring no distractions on his road of destruction. The connection essential to his plan was Zeke, leading him to Grisha’s memories to orchestrate stealing the Founding Titan. Afterward, viewers watch Grisha wander in the forest after stealing the Founding Titan, screaming for Eren’s approval and regret over his actions. Somehow he senses Zeke’s presence, proclaiming to have seen Eren’s memories, and witnesses what we all would learn is the Rumbling. After this declaration, Grisha can see Zeke and begins apologizing profusely for being a terrible father.

We now have a clear picture of what took place, and while Grisha isn’t exempt from criticism, he was being used by Eren. Due to the implications, Grisha warns Zeke to stop Eren before being brought back to the world of the Paths. And while the two are having a moment, Eren thanks Zeke for unknowingly helping his plan to manipulate his father into stealing the Founding Titan which started all because of a kiss (as mentioned earlier). The future he wants to avoid or possibly a future Eren has to make sure comes to pass, and surprisingly set up by Eren. From this moment, Eren changed, and is now unrecognizable when Attack on Titan first aired. This episode put the final nail in what has turned out to be a wildly entertaining story. And considering all of the context clues that were out in the open, I’m left speechless at how much foresight was put into this series.

So now fans are in for a colossal (pardon the pun) conclusion with the two ideologies coming to a head as Zeke is aware that Eren wasn’t working with him. Heeding his father’s warning, Zeke commands Ymir (the original founding titan) to make it so Eldians couldn’t reproduce. Zeke knows Ymir does the bidding of the royal family, so he takes this opportunity to make the euthanization plan happen. But that ultimately Zeke’s downfall. Not wanting to lose everything he’s worked for, Eren rips himself out of his shackles and runs in a desperate attempt to stop her. Eren doesn’t feel that Eldians should be punished for the crimes committed by others and will do whatever he can to stop Ymir from following Zeke.

Thanks to Eren’s encouragement, Ymir was able to break from the hold the royal family had on her.  Eren reminds Ymir of her humanity, saying she’s not a slave or god, and begs for her power to put an end to all the conflict plauging the world. He spoke to her human side, and did view her as a weapon or tool like everyone (including Zeke) has. Ymir was allowed to show her feelings, as viewers were able to see her face for the first time, noticing how big her eyes were as she began crying from joy. After 2,000 years of being treated poorly, she was acknowledged for who she is. It’s a powerful motivator, and is a fantastic way to show how good Eren has been throughout the entire series at reaching someone’s emotion (ask Jean and Riener). This is a powerful image because Ymir is now seen as a girl and is allowed to make her own decision about this power that she never wanted in the first place. And Eren is more than willing to take the mantle for her, creating more of a connection between the two. To the surprise of no one, Ymir lends her Founding Titan power to him as the spine attaches itself to his head and body, causing the walls of Paradis Island to crumble. Simultaneously, Eren becomes the Founding Titan in an enormous skeletal body, towering over the Colossal Titans in the walls. The Rumbling has officially begun, and Eren is ready to destroy all of humanity!

Eren Yaeger has gone from wanting to kill every titan to using these same beings to destroy a world for discriminating against Eldians. It’s ironic how the series comes full circle from the first episode, “To You, in 2,000 Years,” to “From You, 2,000 Years Ago,” with Ymir being referenced as “you” by Eren since he’s the only one who’s able to use the full strength of the Founding Titan in 2,000 years. “To You, in 2,000 Years’ begins the journey to Ymir when Grisha transfers both the Attack and Founding Titan to Eren, which fans didn’t know at the time this was a calculated move by future Eren. It took two millenniums for someone to free Ymir from the shackles of slavery betowed on her by the royal family. “From You, 2,000 Years Ago” completes Eren’s plan to gain Ymir’s ability to free the world of all who oppose Eldians, a price he’s more than willing to pay. Eren has been a fighter throughout the series and it’s astonishing how resourceful he has been  to accomplish his endgame of freedom.

The question is, how will Mikasa, Armin, former comrades, and Marley soldiers handle Eren now that the Rumbling is in full swing! And the setup to this final season is nothing short of amazing. The hints of this possible outcome were littered in plain sight, but important context was left out to give viewers a false sense of security of what the reality of Attack on Titan was.