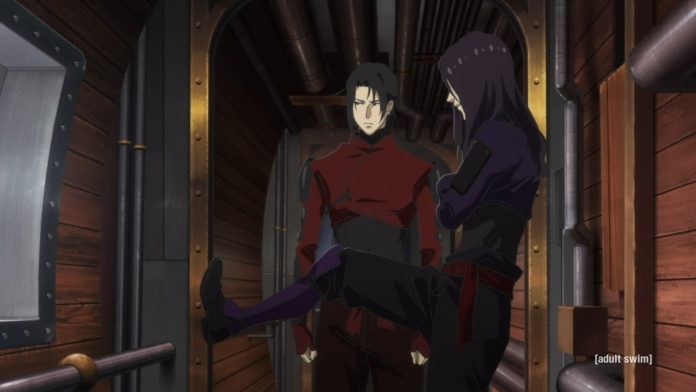 Being able to hold the audience captive is a powerful tool any series can use. Why shows like Attack on Titan and Re:Zero became so popular when they debuted is because of the cliffhangers and the drama that had fans asking, “What will happen next?” Fena: Pirate Princess has been trying its hand at accomplishing the same feat with loose strings floating in front of viewers with questions such as, where is Eden, what is the importance of the stone, and who is Fena herself? And while Fena: Pirate Princess hasn’t hit the emotional cord when it comes to drama within the story (at least so far), the characters do a fantastic job of picking up the slack. Sure, I’d like to learn more factual information about the stone or even Abel’s connection to Fena (as it was teased at the end of this episode). But the pathos that each character gains after every moment might be more important than anything going on within the story, and I find it quite enjoyable to watch.

After seeing a stunning dream sequence with Fena, she gets into a heated argument with Yukimaru as she fixes his bandage. Fena wants to be less of a problem and more capable, so Yukimaru and the crew won’t have to worry (and cause more injuries). Yukimaru doesn’t express the same feelings and wants Fena to rely on the team, causing a considerable stir that every crewmate hears. The two storm off, with Fena now asking Shitan to help her become competent with a weapon. And while no one else seems to share the same sentiment (or at least are too lazy to want to train her), Shitan decides to offer his assistance despite his shortcomings.

We get to learn quite a bit about Shitan in this episode, as he is more than just an attractive young man. He isn’t proficient with a sword, so he took up a bow to help out those he cherishes, including Yukimaru. He saved Shitan, and ever since then, Shitan has wanted to return the favor. And we begin to see just how close these two are, considering Shitan confronts Yukimaru after his fight with Fena, mentioning how Yukimaru is letting their captain get under his skin and acting differently. Maybe he can tell that the two have some romantic tension going on, but it was nice seeing how observant Shitan is (which makes sense since he’s an archer).

Fena begins her training in a rather cute montage, where a new day would come with her trying to learn some basics. And after each day, a crewmate decides to try their hand at teaching her. It was cute, and seeing Fena mess up made the montage a lot more enjoyable (also, don’t give her a large gun). But she’s trying, and there isn’t anything wrong with a captain wanting to be more capable and reliable for her crew, which I believe influences everyone to be even better.

The back half of the episode does progress the story along as they found some answers about the stone. A young woman named Arya believes that someone can explain the stone on the island and offers her assistance. And while Arya might have been used to look like a romantic rival of Fena (for Yukimaru) in this episode, it was nice to have some new blood show up and provide some answers about the item that kick-started this entire series.

Arya takes our crew to talk to the village Burgermeister, where Yukimaru helps fix a knife of his and, in turn, rewards the group with information about the stone. It would appear that it originally was made in the area our heroes are visiting. Still, when the Burgermeister checked his record book about it, we learn that the stone was brought to the island to be carved from France. The client was none other than Joan of Arc, but the issue is that she died five years after the order was placed. Someone went through great lengths to keep their identity a secret, and now it’s to Fena to find out who it was.

I have to say, the second half of this episode gave me something to sink my teeth in. I found the island’s history fascinating since the craftworkers don’t etch any signatures on their products that could force others to leave, and about the clientele of the Burgermeister (which includes Columbus and Leonardo da Vinci). It adds an interesting wrinkle and helps create the mystery of who commissioned this stone to be worked on and why did they go through such great lengths to keep it hidden. I honestly would’ve loved it if both Arya and the Burgermeister could stay around primarily due to the type of knowledge they have (as well as being a fun foil with Fena). Plus, both Laura Post and Mike Pollack did a great job in performing with a german accent. The English cast continues to shine!

And while the mystery of stone itself is fascinating, I’m curious about the connection with Abel. He kept muttering La Pucelle at the end, and apparently, Fena feels the name/phrase is familiar to her. Abel only seemed interested in holding an illusion about the government’s control over free islands. But this search for both Fena and possibly the stone feels a lot more personal than many were lead to believe. These types of mysteries are needed to help keep fans interested, and while I could’ve used a bit more, I think we have enough to continue the excitement of Fena: Pirate Princess. So, where will our heroes go next? Anyone’s guess, but finding more details about this stone will help invigorate some much-needed story to the series!

Rating: Needs to see the next episode ASAP due to the new information on the stone!

CJ Maffris is the Editor-in-Chief at Toonamifaithful.com. Feel free to follow CJ on Twitter @SeaJayMaffris to see all of his commentary on Fena: Pirate Princess

Don’t forget to check out the Toonami Faithful Podcast as well as their new podcast project Fena Cast with new episodes every Wednesday and Thursday.