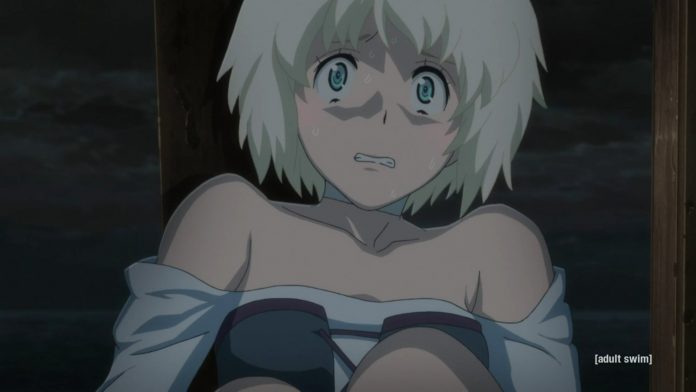 This is a pirate series, so of course, there would be some form of sacrifice or loss. While not touched on a ton in these reviews, the theme of death has been a constant throughout Fena: Pirate Princess. Fena lost her family 10 years ago, the lore of the Goblin Pirates, fighting that usually follows pirates, it’s always been there. But the lingering feeling of dread and death never really hit me until this episode finished. Abel and O’Malley duke it out in a bloody affair, and Yukimaru decides to take on Abel’s crew by himself. Death is inevitable, and Fena: Pirate Princess pulled the right strings not to make it theatrical and to place some serious doubt that our main cast of pirates will make it out unscathed.

But before we get to the dramatic moments of this episode, we have to have the scene set as the crew of the Goblin Pirates are keeping themselves busy and quiet after Yukimaru’s departure and Fena’s capture. At first, it would appear that Enju and Kaede are about to make a run for it to rescue Fena and Yukimaru. Joined by Karin, Makaba, and Tsubaki, Shitan tries to convince everyone to follow orders. This debate encourages Makaba to give a rather emotional speech about what it is they are meant to do and asks Shitan why he picked up the bow in the first place (to save Yukimaru). Begrudgingly, Shitan gives in as the pirate crew rush to Fena!

And while Fena isn’t in any danger (yet), she continues her chat with Abel about her mother (and his painting) as it would appear that he was infatuated with La Pucelle. I’m beginning to feel that Abel might be projecting his love onto Fena due to all the touching and how much Fena resembles her mother. It creates creepy vibes of Abel, who at first felt like he had a mere crush. However, we were left hanging on a few questions (such as how much Abel loved Fena’s mother, if she reciprocated the feeling, and why she took Fena away) when the Rumble Rose changes course and goes on the offensive. Not surprising, considering O’Malley is a pirate captain, and she has been slighted by Abel (which I believe she is also in love with). Early on, it would appear that Abel is in some trouble, but he would then order to fire a special cannon and demolish the Rumble Rose in one shot. After watching it a few times, it leaves quite an impression, and seeing the face of despair and anger on O’Malley’s face says it all.

I’ve always been a fan of ship battles in pirate media. Like in Pirates of the Caribbean, I enjoyed seeing cannon firings and crews rushing to gain a positional advantage (which probably comes from my routes in playing chess and Pokemon). So seeing the animation flow during this sequence was something to behold. And nothing can top the emotional high of seeing Abel’s cannon wipe out an entire ship in one shot. The explosion looked marvelous, and the animation from the shell leaving the cannon barrel is what peak anime animation is supposed to look like for those who crave a visual experience. I was memorized and even gave out an audible scream at home when I first saw it.

As you can imagine, the battle was quickly over, with it looking like the Rumble Rose pirates were utterly wiped out (with Yukimaru sailing through the wreckage and spotting dead bodies. It would spark flashbacks with both Yukimaru and Fena when their ship was attacked 10 years ago. Yukimaru used his flashback to help calm his nerves and continue his search for Fena (even remembering when Kei was training him to be better with the sword and to seal his heart). Fena, on the other hand, begins to go in a state of shock seeing the wreckage and recalling the people who attacked her 10 years ago to look much like Abel’s crew. Certainly adds the question of who attacked Fena in the past. Due to her paranoia and screaming, she is about to be taken against her will when Yukimaru jumps in to rescue her. He makes a valiant effort to save Fena, slaying as many adversaries as he can. Still, he is shot down by Abel’s (interesting-looking) pistol, giving Yukimaru a glance that reminded him of someone 10 years ago (which could have been Abel before). Thankfully, the rest of the Goblin Pirates show up and begin their assault to rescue both Fena and Yukimaru in a bloody turn of events. They were able to recover both of their allies, but Yukimaru is in a dire situation. Will he be able to survive his gunshot wounds?

There were a couple of firsts here for me that stood out to me. I’ve been applauding the quality of the animation of Fena: Pirate Princess. Yet this episode stepped things as mentioned before from the ship battle. It’s the kind of fun I love seeing in anime, and seeing a step up in animation for a dramatic moment like that, gives Fena: Pirate Princess its own special moment you had to see live when it happened! However, this was the first episode where a voice performance stood out and grabbed hold of my undivided attention. That isn’t to say the acting has been bad (quite the contrary, it’s been excellent), but there wasn’t a scene that left a considerable impression to write about so far. That all changed with Brittany Cox during Fena’s panic attack was the kind of performance that should win awards for most inspiring acting or best voice actor of the year. It felt so real, and she was able to mimic the shortness of breath and panic sound that felt real enough to where I hope the ADR Director made she was okay. It was crazy how talented she is, and nailing that type of delivery isn’t easy. I was absolutely floored by this rendition and can’t wait to see more emotional moments such as this as we are now just five episodes away from finishing.

As you can tell a lot of drama in this week’s episode, with the angel of death hovering over everyone. I’m very curious as to Fena and Yukimaru’s flashbacks that both place men looking like Abel’s as well as Abel himself at the scene 10 years ago. I wonder if Abel’s obsession with Fena’s mother created his desire to acquire both the treasures of Eden and Fena herself. And what will the ramifications be for the Goblin Pirates disobeying orders from Master Yukihisa as well if O’Malley is still alive to take revenge of Abel’s cannon barrage? And though I’ve greatly enjoyed this series, I do hope that Fena can take a more active role in this series, since as of late she’s been stuck in this damsel in distress cliché that is off-putting. I say this considering the growth she had as captain in previous episodes, so I hope this does improve down the line. But all I can say is that these episodes are too short, and I need answers, but fans will have to wait as we are getting close to the home stretch!

Rating: That cannon shot was something special to watch, easily the most memorable episode of the series!

CJ Maffris is Editor-in-Chief at Toonamifaithful.com. Feel free to follow CJ on Twitter @SeaJayMaffris to see his commentary about Fena: Pirate Princess and Toonami as a whole!

Don’t forget to listen to the Toonami Faithful Podcast to get all the best commentary on the iconic action-cartoon block, as well as checking out the bi-weekly FenaCast episodes discussing all things Fena: Pirate Princess