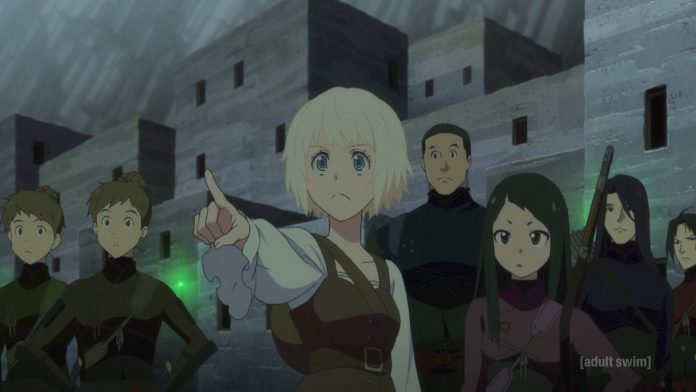 It’s silly how I can compare Fena: Pirate Princess with that of a starting pitcher in baseball (stay with me here). Typically, a pitcher does what they can to lead the opposing hitter to do or react the way they want, subsequently winning the at-bat or matchup. I’d argue that this series is doing the same thing with how episode ten began and finished—leading the viewers to believe that Eden is where our merry crew of pirates reached. However, I’d wager that there’s more to it than meets the eye, especially considering the whereabouts of Fena, Yukimaru, and Shitan (can’t forget about him). While I’ve been anticipating a bloody escapade to occur starting now, that ultimately didn’t happen yet as Fena: Pirate Princess continues to set up and control the narrative on how fans should react to the bigger moments since they are invested. One, two, three, you’re out as Fena: Pirate Princess is throwing darts for strikes. Not a lot of action happened; making fan anticipate what SHOULD come in the last two episodes is making all of us ripe for a colossal outburst at the end.

The Goblin Pirates race off to the coordinates that Fena and Yukimaru suggested after deciphering all of the clues at their disposal, with Abel (along with Cody, who is being hinted at playing a significant role before this series ends) noticing where Fena is sailing off. Fena and the crew seem to be nervous as they draw close to Eden. Fena and Karin have a very powerful heart-to-heart (again driving home how character-driven this series is) about their nerves and what they might be expecting as their journey reaches its climax.

Thankfully, before Kaede and Enju decided to turn things around (due to how small Eden looked initially), a massive island sprouts from the ocean instantly. Almost like it was explicitly waiting for Fean to arrive. I was left in awe, looking at how beautiful the island’s scenery is, much like how beautiful it was during Abel’s backstory. The tree trunks’ pinkish, purple hues match the other vibrant orange and red leaves. Fena marches forward, leading the group much as she did in Orleans, only more confident and composed. The group reaches a dead end by a waterfall, and thankfully the group figured that the path continued behind the landmark. Continuing through a cave, the group arrives at what can only be described as abandoned ruins (I was getting a feel of an ancient Miyan approach). Again, the scenery during this part was spectacular, bringing yet another strength of the series to light. I’ve applauded both its animation and cast, but not enough credit for the artwork of scenery. And I think more onus should have been on that considering how masterful the artist of Fena: Pirate Princess has been. It’s been aces and makes watching the show more enjoyable.

The fun doesn’t stop as we are treated to a couple of cute moments between Fena and Yukimaru as she declined to take his hand and was reluctant to let him carry her down a steep decline (Karin even joins in on the fun asking about Yukimaru and Fena’s relationship). Sure, they might be making a difficult trip down a large hole, but some levity is nice. I honestly can’t get enough of the teasing the crew gives those two as it adds an excellent level of humor and comfort since we are heading to what could be a traumatic event. After all, Abel and his crew are right behind Fena!

The Goblin Pirates continue to traverse through an ancient library, with Karin wondering if it could have been the lost library of Alexandria. It’s a dream for history buffs out there considering the callbacks we get to things like this library, as previously mentioned, the legend of El Dorado, or the story of Joan of Arc. And while those are the most apparent, other little crumbs might be lost on others, such as the linage hinted at by Yukihisa Sanada or the legend of the Kusanagi sword (h/t to our Director of Social Media, Celia Rose, for making sure I had some of this correct). These historical nods are littered all over Fena: Pirate Princess, and it’s that attention to detail to make stories more authentic that doesn’t get enough credit. A lot of research was put into this, and I am once again impressed and loving all the little extras those who enjoy history class would be excited to see! And I wanted to point this out, considering how many real historical places, things, stories, etc., are used in Fena: Pirate Princess.

Fena opens the vault they reached and find a room packed to the brim of treasures from all over the world in different times and places! We are talking about a room filled with so much gold that Scrooge McDuck would’ve been taken aback. And while many are celebrating at the find, Shitan seems to walk elsewhere alone, entering a room with the name “Yusuke” written, and stumbles upon another bit of treasure (not sure what it could be after the quick glance we got). Fena seemed disappointed and felt that there was more to the treasure room, considering what her father did to make sure she’d find this place. She and Yukimaru reach what they believe to be the lattice stage, and on the platform, Fena begins to dance in what has to be the most beautiful scene the series has given to date. The music complimented the animation so much, and watching the floor light up where Fena danced was a wonderful touch. Personally, I don’t find Fena to be this super attractive character and didn’t quite get why she was so coveted in that regard early on in the show. Yet seeing this scene of her dancing got me. She looked both elegant and beautiful, which stole my heart. This entire sequence was, without a doubt, my favorite part of the whole series (so far, we still have two episodes left).

After Fena’s performance, a ton of platforms rise, creating a staircase above that unlocked an illusion that was cast in the room and showed that there was water above them. This is it! This is where Eden is, and two begin rushing up the stairs. But they better hurry because Abel and his government lackeys are following closely!

I NEED MORE AFTER THIS CLIFFHANGER! While Fena: Pirate Princess has continually left the audience wanting more, this setup is driving me crazy (in a good way). I’m swinging at every pitch thrown our way, but instead of giving viewers a fastball down the middle, they instead are throwing us sliders and curves that look to be coming right for us, only to dart away at the last second, catching us off guard. I’m incredibly impressed with the entire journey Fena: Pirate Princess has given us and is on the verge of throwing a perfect game. All of these little hints, crumbs, dramatic moments are nibbling the plate and getting strikes every time, and I keep falling for it, every time.

Rating: The best animation to date during Fena’s dancing!

CJ Maffris is Editor-in-Chief at Toonamifaithful.com. Feel free to follow CJ as he continues to offer his commentary on Fena: Pirate Princess on Twitter @SeaJayMaffris

Don’t forget to listen to the Toonami Faithful Podcast! The number one podcast to get all your Toonami news and best commentary on the block each and every week!