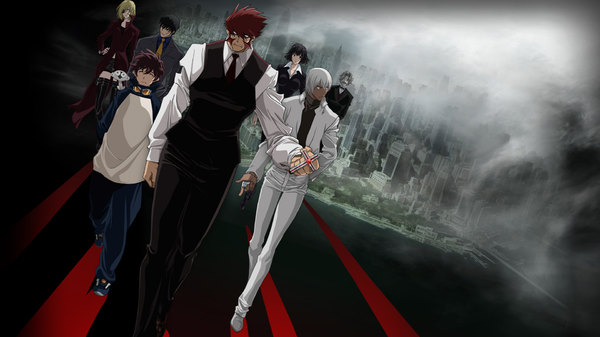 Occasionally we like to introduce Toonami Faithful readers to action/adventure series that we feel would fit Toonami like a glove but for whatever reason have not aired on the block yet. For that reason I present to you this review of a series from the creator of Trigun and the studio that brought us Space Dandy, Fullmetal Alchemist and Eureka 7: Blood Blockade Battlefront.

Imagine a New York City where all manner of bizarre sentient creatures live amongst us. That is the New York City now known as Hellsalem’s Lot where Leonardo Watch has come to seek answers about his all-seeing eyes. Through happenstance and a case of mistaken identity he ends up being initiated into the Libra organization whose purpose is to keep mythical and magical forces in check so people can go on living their mundane little lives. Libra is chock full of colorful characters with unique powers and abilities that are capable of some serious property damage, the most troublesome of which is Zapp Renfro. Leonardo ends up getting dragged into all manner of unsavory situations due to Zapp’s lack of inhibitions. Thankfully the majority of the other members of Libra are much more reliable. After one particularly bad injury due to Zapp’s shenanigans, Leo ends up at a hospital where he meets a peculiar girl named White. Little does Leonardo realize what his chance encounters with Libra and White and her brother Black can lead to.

Director Rie Matsumoto (Pretty Cure franchise, Kyōsōgiga) and writer Kazunao Furuya (Liar Game) over at Studio Bones have adapted Yasuhiro Nightow’s manga series into a gripping story that is a feast for the eyes. The quirky style that is similar but even more over the top than that of Nightow’s Trigun, shines in this setting that feels like a mash-up of Futurama or Space Dandy and Baccano!!. Taisei Iwasaki’s jazzy score masterfully accents the scenery in the bustling city, especially when the action goes off the rails, and the opening and ending themes from Bump of Chicken and Unison Square Garden perfectly bookend every episode. Matsumoto’s dynamic animation direction is a sight to behold while Furuya has taken Nightow’s characters and story and composed a well-paced narrative with a satisfying climax.

Blood Blockade Battlefront will keep you on your toes tossing all manner of scenarios at the viewer from episode to episode. Eventually there is an overarching plot that finds its way to the surface but there is a fair amount of time spent exploring both the mysteries of Hellsalem’s Lot and what sorts of social issues stir in a city that has become a melting pot of all manner of species. Even finding the right place to get lunch can be quite the task, especially when you never know when the restaurant you’re eating at will get blown sky high. The flexibility of the setting allows for a tremendous amount of variety and the series balances its comedic and dramatic moments exceptionally well. There are several episodes dedicated to fleshing out the characters. One particular episode steps away from the frantic action to allow the head of Libra, Klaus Von Reinherz, to engage in a battle of wits and another involves Leonardo witnessing the discrimination directed toward alien-life forms. I feel the series did an excellent job of developing Klaus, Zapp, Leonardo, Black and White in particular.

Unfortunately, several of the characters do not get much screen time as the majority of it is taken up by Leonardo or Zapp but none of the cast feels particularly lacking despite that. Leonardo gets the most focus and nearly every encounter he has moves the story forward or allows the viewers to see Hellsalem’s lot through his eyes. Thankfully, Leonardo is an endearing character who is genuinely thoughtful and not too much of a doormat. Nonetheless, I would have liked to get to know Klaus and several of the other members of Libra a lot more but I suppose there was not a lot of time to explore the expansive cast in just one short season. The focus stays on Leonardo, arguably to the betterment of the pace of the narrative. None the less, I cannot help but feel there is some wasted potential here. I really would have liked to spend more time with this engaging cast but there is only so much you can do with twelve episodes.

There is nothing about Blood Blockade Battlefront that feels disjointed despite the numerous elements present. It is the rare example of a show that can constantly change up the scenario and not feel like it missed a beat. A lot of crazy things happen in Hellsalem’s Lot so there are no shortage of exciting chase scenes and battles with the supernatural either. The design aesthetics and atmosphere ooze personality and the backgrounds are gorgeous The city feels lived-in and the architecture is striking. The animation remains top-notch throughout the season and the fight choreography is no slouch either. As previously mentioned, the music perfectly complements the visual flare. Above all else, it’s a hell of a fun ride.

Viewed in high definition on Blu-ray, the visuals are crisp and the colors have the right amount of pop without getting overbearing. The 5.1 stereo audio mix heightens the music, sound effects and vocal performances beyond what streaming can offer. Whether you choose the original Japanese audio or FUNimation’s excellent dub, you’re in for a great cast. Gintama fans would likely get a kick out of Leonardo being voiced by Shinpachi himself, Daisuke Sakaguchi and fans of the Japanese One Piece and Gintama alike will recognized Zapp as Kazuya Nakai, the voice of Roronoa Zoro and Toshiro Hijikata. On the dub side Leo is voiced by Aaron Disumke (Yo Takami in Deadman Wonderland, Lucifer in The Devil is a Part-Timer) and Zapp is voiced by our favorite Dandy man, Ian Sinclair (Space Dandy, Toriko, Brook in One Piece). They are joined by the likes of J. Michael Tatum (Sebastian Michaelis in Black Butler and Dr. Gel in Space Dandy), Trina Nishimura (Mikasa in Attack on Titan, Kurisu Makise on Steins;Gate), Josh Grelle (Armin in Attack on Titan, Mao Sadao in The Devil is a Part-Timer) and Micah Solusod (Soul Eater Evans, Bea in Space Dandy).

Two particular standouts are Megan Emerick as the voice of White and Phil Parsons (Nappa in Dragon Ball Z) as the voice of Klaus. It is nice to hear both of them get a meaty role in this series. Mike McFarland and Felecia Angelle’s ADR direction did not disappoint. They got marvelous performances out of the entire cast. Dominique French’s ADR mix sounds phenomenal and Blair Rowan’s script was on point. Considering this was originally recorded mere weeks after these episodes aired in Japan, the whole FUNimation staff did a bang up job and proved the time crunch did not lead to sub-par performances.

Special features on the discs include some interviews and episode commentaries from the FUNimation cast and directors, Japanese promos, FUNimation trailers and a dubbed recap episode. The interviews and commentaries are short-lived but enjoyable watches. The special edition set includes some art cards featuring the members of Libra, the series on two Blu-rays or and two DVDs and a nice box to keep the two standard Blu-ray cases in. The art on the box offers a nice full color group shot. The Blu-ray covers are minimalistic using only shades of black, white and red but the art isn’t shabby. The discs also have character art on them in full color but are mostly plain white. It is a simple but nice looking set that won’t hog much space on your shelf. Most buyers would likely be more than satisfied with the standard edition Blu-ray/DVD combo pack. Everything on the discs will be the same as the special edition so you only miss out on the box and the art cards. I do however feel the series is worth owning on Blu-ray because streaming is no match for the quality of the audio and the visuals on these discs and it’s a fun show to have on hand.