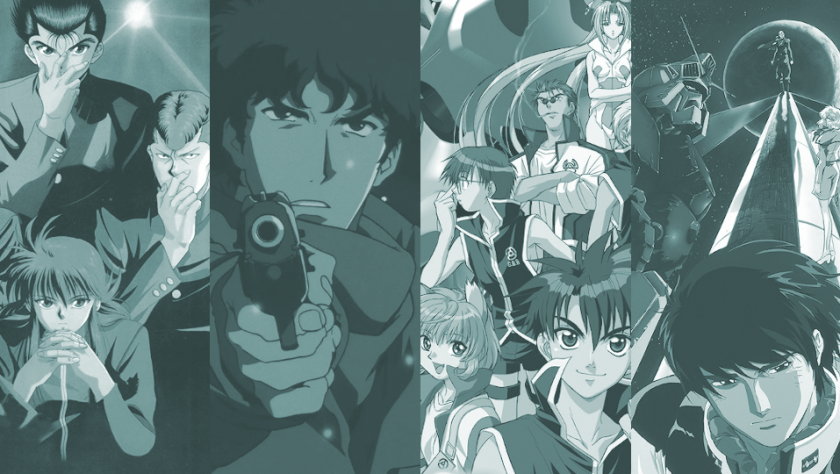 The Toonami we watch today wouldn’t exist without the Toonami that broadcast back in 1997, but another action-centric programming block was also crucial for the block’s return. This Toonami “fansite” is well overdue for acknowledging the block that kept non-toyetic anime on basic cable, and made huge strides in providing action and drama animation for mature audiences. It’s time to shine the spotlight on Adult Swim Action.

On Feb. 23, 2002, the Cartoon Network spun-off the action portion of their fledgling Adult Swim block to its airwaves on Saturday late nights. Trading Thursday encores for a Saturday night block that was half cable television premieres, Adult Swim finally gave their sole action/drama program: Cowboy Bebop, some much-needed company. The Cartoon Network was no stranger to late-night action programming in 2002. Toonami’s Midnight Run had existed in some form since July of 1999, and its first iteration was on Saturday nights from 12 a.m. until 5 a.m. Even before that, action animation seemed to end up on weeknights around  midnight. I also must mention “The Night of the Vampire Robots” which was a one-time marathon of heavily censored anime films which also happened to air on a Saturday at midnight. This new block, however, was the beginning of a tradition that still exists on Adult Swim to this day, albeit not without the occasional hiatus and massive scale down.

Much like the Adult Swim block that previous September, Adult Swim’s Action Saturday (commonly referred to as ASA) had a humble beginning. Reruns of Cowboy Bebop were joined by the U.S. cable television premieres of Yu Yu Hakusho, Pilot Candidate, and Gundam 0083 and reruns of Toonami favorites: Outlaw Star and Tenchi Muyo. The block ran from 11 p.m. -2 a.m., while the comedy block on Sunday ran from 10 p.m.-1 a.m. and replaced the hour Cowboy Bebop with all manner of filler from the late-night Cartoon Network vault. Yu Yu Hakusho was  lightly censored, but unfortunately, both Pilot Candidate and Gundam 0083 were already edited to Toonami standards. Both of those series were picked up with Toonami in mind and were thrown onto Adult Swim Action because they wanted something fresh for the block. Outlaw Star and Tenchi Muyo were the Toonami edits, but at least they were allowed to air their original intros. Anybody who tells you hearing “Through the Night” doesn’t enhance a weekly viewing of Outlaw Star is a liar.

It was pretty clear from that initial schedule and how everything (but Yu Yu Hakusho and Cowboy Bebop) was edited, that Adult Swim Action Saturday was thrown together with whatever was on hand. Gundam 0083 ending up on Adult Swim at least made sense when you consider how things were panning out for Universal Century Gundam series on Toonami. Bandai’s fool-hearty attempt to bring the original Mobile Suit Gundam to the States blew up in their faces spectacularly. Gundam 0080 and 08th MS Team started as Midnight Run exclusives most likely due to their violence and subject matter (though 08th MS Team was eventually broadcast on the afternoon Toonami block). At any rate, UC (Universal Century) Gundam’s interest seemed to lean more toward adults right out the gate, so moving it to Adult Swim made a lot of sense. Eventually, both MSG (Mobile Suit Gundam) and 0080 would rerun on Saturday ASA.

Gundam only aired on Adult Swim for roughly a year, capping off with the broadcast of the film Char’s Counterattack in January of 2003. Gundam wouldn’t return to Adult Swim broadcasts until Iron-Blooded Orphans joined Toonami thirteen years later. Bandai was still fixated on selling Gundam toys between 2002 and 2005. That worked out for G. Gundam and SD Gundam Force, but the much more military-focused and politically charged Gundam SEED probably would have been better off on Adult Swim rather than edited for Toonami. As for the other mecha series from Bandai, Pilot Candidate, I’d say Toonami dodged a bullet with that one.

Tenchi Muyo and Outlaw Star made for adequate filler programming. They would fit ASA well with less censorship but even with edits, those series still appealed to adults. It is still insane that those anime were ever aired on children’s television. Toonami pulled off some wild things back in the early 2000s. Before joining ASA, both Tenchi and Outlaw Star were regulars on the Midnight Run. Their longevity on The Midnight Run (TMR) probably helped create the case for a mature action block if not also, helped build a case for adult-target animation block in general. Later in 2002, Toonami was leaning away from the more mature stuff, and the network was doing things like putting Hamtaro on the block. Though oddly enough, while Tenchi Muyo was airing on ASA, Toonami was still airing Tenchi Universe and Tenchi in Tokyo. Tenchi left ASA before June and made way for reruns of Mobile Suit Gundam, and it disappeared from Toonami right around then as well.

The packaging of ASA was initially done by people who were also working on Toonami. While they gave it its own flavor, the way promos and bumpers were cut gave off a Toonami-like vibe. The music in particular would have felt very familiar to Toonami viewers. You gotta love the robotic voice in the disclaimer, and the old “put the kids to bed” promo.

ASA didn’t get another significant addition until August when InuYasha joined as the headliner. While the initial episode seemed a tad overzealous in the editing department, things smoothed out soon after. InuYasha would go on to be Adult Swim’s second-longest-running anime behind Cowboy Bebop. I guess it was lucky for ASA that Toonami was barred from airing it just because InuYasha was pinned to a tree by a magic arrow. I would say InuYasha was the lucky one. It was spared the fate of Yu Yu Hakusho, Gundam, and Rurouni Kenshin, which in hindsight, were probably better off on Adult Swim than Toonami.

Gundam’s last hurrah on ASA was also Action Saturday’s last night for nearly a year and a half. After the broadcast of Char’s Counterattack early in Jan of 2003, ASA moved to weeknights replacing Toonami the Midnight Run with two hours of anime that followed an hour of comedy. Over the next year or so, ASA would make strides in offering content with far less censorship, but not without the odd hiccups along the way. Kyle Pope’s archive of edit lists are a fascinating read. The 2003 broadcast of FLCL pushed the envelope. It managed to air with only two minor edits, and they kept broadcasting those same tapes for the better part of a decade.

Adult Swim Action Saturday returned on April 17, 2004 with the cable premiere of The Animatrix on the very same night that Toonami was moved to Saturday primetime. I recall there were some murmurs at the time that Adult Swim would make Thursday their action premiere night, and Toonami would run from 7 p.m. until 2 a.m., like the current Cartoon Network Saturday action block (commonly referred to as SVES). I believe there was also a tentative schedule that had Toonami airing until 11 p.m. and Adult Swim starting at midnight. Eventually, the schedule was settled with Toonami airing 7 p.m.-11 p.m.and Adult Swim Action Saturday returning its original 11 p.m.- 2 a.m. time frame. New episodes of InuYasha and the US cable premiere of Wolf’s Rain lead the block while reruns made up the other two hours. The plan to have both  Toonami and Adult Swim Action back-to-back felt perfect. Unfortunately, it became evident that even InuYasha couldn’t hold up Saturday Adult Swim on its own.

Come July, the comedy infusion on Saturday night began, breaking up the non-stop action of Toonami, by going into Adult Swim’s anime with a one-hour comedy intermission. It was amusing to see Toonami promote Futurama and Sealab 2021 in their “Now, Next, Later” bumps, but the whole thing irked anime fans something fierce (myself included). I freaked out about the ratings and pleaded for Adult Swim to vacate Saturday. Looking at those old threads on ToonZone is a truly humbling experience seeing how things have turned out for Toonami. I’m certainly glad they didn’t listen to my cries to move action premieres to Thursdays because the tradition of Adult Swim Action Saturday’s has continued to this day. Yes, even the comedy infusion. From that point onward, comedy would encroach on action from time to time, and every attempt at an all anime block was short-lived. At one point, it was so bad that the only action programming on Saturday nights was Bleach premieres and Fullmetal Alchemist reruns at 11 p.m. with encores at 2 a.m. and Code Geass and Moribito premieres at 5 a.m. That was the biggest slap in the face that ASA ever suffered through. Thankfully, they stopped that nonsense after about a month and gave ASA all of the 1 a.m. – 6 a.m. time frame. They even made a “charming” promo to let people know about it.

Comedy infusion generally did make an effort to fit in with the action programming. The sci-fi comedy Futurama was a regular, and they tried action (or at least violence) centric comedies like The Venture Bros., Metalocalypse, and The Boondocks. The Boondocks is honorary ASA and was commonly used to bridge the comedy portion with the action portion of the night. Even now, the post-Toonami hours are filled with shows that are likely to appeal to Toonami viewers though pre-Toonami tends to play things safe with as many FOX reruns as Adult Swim can spare. Thankfully, I don’t think we’ll ever have to worry about comedy taking over the 12 a.m.-3 a.m. time-frame again and a 3.5-hour block of Toonami starting at 11:30 p.m. and ending at 3 a.m. sure beats 5 a.m. premieres.

ASA had some rough times to be sure, but it managed to stick it out until 2012. Toonami was able to return to television and continues to broadcast today because ASA carried the torch for over a decade. Hopefully, that nearly 20-year long tradition will continue for many more years. There’s  too much to discuss regarding the impact of Adult Swim Action, and I intend to explore its contributions to the history of action animation broadcasting, and Toonami’s legacy in future pieces. But for now, on the weekend of its 18th anniversary, I salute the humble beginnings of Adult Swim Action Saturdays.

“Saturday night’s alright for fighting, get a little action in” – Elton John

I want to thank Swimpedia for their extensive Adult Swim schedule archive as well as, the Toonami Wiki schedule archive, and Kyle Pope’s edit lists on The Anime News Network. All three were invaluable resources when I was researching the programming history of Adult Swim Action and Toonami.