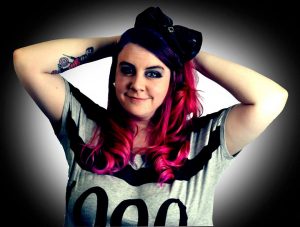 Have you heard the one about the ex-Hacker who became a rapper/opera singer/dirty pop singer?

You haven’t? Well you need to!

Ally Desu aka IRC Chatgurl aka Ally Sk8…whew (breath) but most famously known as Twill Distilled.

Believe me when I tell you, this girl is CRAZY!

Crazy in a good way though. She puts an amount of passion into her music that is rarely found these days. Seriously. There were days when I would ask her questions for this article where she would burst into tears. Tears because she didn’t think she would make her own deadline. Everything that could happen did happen!

Everything from rappers who didn’t send their vocal stems on time, forcing Ally to find replacements, to trying to sound proof her basement studio.

Ally was born as…

Sorry, that’s privileged info. If you really wanted to know that, you can visit her Indiegogo campaign at the link below and donate.

I know you guys are wondering, where in the world did she get the name Twill Distilled?

That’s actually closer to the truth than you know!

Twill went to school for fashion design. As you know, Twill is a type of fabric weave. What you may not know is that Twill is also a sub-coding language under Python that’s used for building websites. It seemed as if Twill enveloped her love for everything that she was.

The “Distilled” part is because distilled is the process where you take a product and remove the bad elements and in the end you come out with a stronger and better product.

So, being Twill is actually a distillation process that makes her a better person. That, and she loves vodka.

Twill Distilled is originally from Maryland in the DMV area. For those of you who don’t know what that is, that’s the District, Maryland, and Virginia. She says she started off hating music.

(BTW, Big SHOUT out to Matthew McCoy, who is Twill’s grade teacher, for challenging her enough to fall in love with it!)

While she was in college, she did a lot of bar performances (surprise there…after all she IS Twill DISTILLED!) and karaoke. Even after a good response from the audiences, she still didn’t think she was good enough to do music. To her, this confirmed the reason she went to college for design instead of music.

Of course, back then, Twill probably was spending more time actin out on TOR, which could very well be an acronym for Twill’s Own Revenge! At one time, she was a contributor for Encyclopedia Dramatica. I’m not one to gossip but…ask Twill’s ex-fiancee (and a couple of others who shall remain nameless…) about messing with the Chatgurl!

She champions the amazing cause of diabetes research. Twill Distilled would take all of the money she has and donate it to diabetes research. She is a type 1 diabetic, although she does really well with it. She thinks of the little kids especially who have this disease, and how there is barely ANY awareness.

For those of you who don’t know, Twill Distilled has an album dropping in 6 days on Dec. 7th called Planet Twill. Make sure you stop by and show her a lot of love. Don’t be scared, she won’t go all “chatgurl” on you. Just don’t piss her off!

Twill has an Indiegogo campaign that you can donate to at: