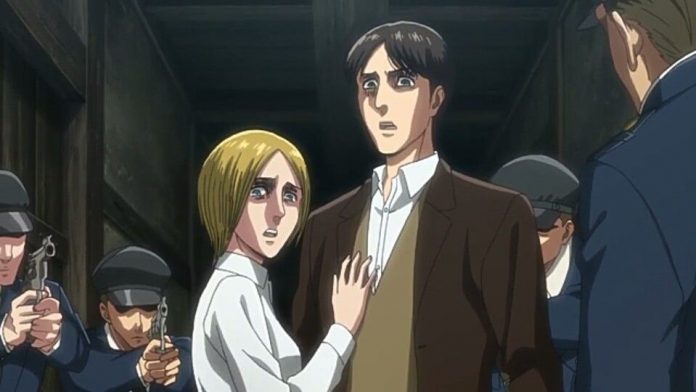 As many readers and listeners to the Toonami Faithful Podcast (TFP) may know, I’m not the biggest fan of the final season of Attack on Titan. Due to some questionable choices by the author and ambiguity on specific issues, the last season has left a horrid taste in my mouth. It’s disheartening, and many close friends of mine have been upset, seeing how I was once an avid fan of the property, and now have a more negative outlook on it. However, just because my overall enjoyment of the series soured, that doesn’t mean I didn’t notice some topics from this final season that are compelling to mention. And one that came at me like a sack of bricks was Eren’s father (the person I feel is the true antagonist of Attack on Titan) and how he warped not only the views of his children but the audience as well. Now that we have been given the entire story of his time in Marley and Paradis, it’s safe to say the Grisha was using the unknown to his advantage to create a persona that was all smoke and mirrors. He is propaganda personified, and given the real-life issues that have received national attention, it would be an exciting discussion to dive deeper into this topic.

“The spreading of ideas, information, or rumor for the purpose of helping or injuring an institution, a cause, or a person.”

It’s funny how this can precisely define Grisha as a character. Throughout Attack on Titan, much of the information viewers had was mainly inspired by what Grisha did or said. Back in the first season, he mentioned how many answers to Eren’s questions are in the basement where he worked. Eren’s sole purpose for the first three seasons was to find out exactly what his father knew and how he could save humanity from the state it was in at the time. And so, as the audience, we were led to believe Grisha was an all-knowing character, akin to a Merlin archetype. He knew the answers to the tests and why things ended up the way they did, so of course, we valued his knowledge and wanted to learn more (as did Eren).

It wasn’t until we see Grisha’s flashback where he even garnered more like the last hope type of persona. Especially after fans see what led to Grisha’s warpath of revenge when a soldier from Marley killed his sister. Add on to when Grisha informed everyone how his son betrayed him due to the warped teachings of Marley, only did more to solidify the fault lines in Attack on Titan. Due to Marley’s prejudice toward Eldians, (that we learn about), Grisha led everyone to believe that their propaganda got his son and forced him to betray his family, cursing Grisha to end up in Paradis to suffer. It made him sympathetic and helped garner a lot of resentment toward Marley and nearly solidified him as the prophet to help save Paradis from both titans and Marleyans alike. But much like the saying of assuming goes, fans were only given half of the story, as Grish left out some vital information for everyone to consider.

However, with the final piece of the puzzle added during the last season, we now know Grisha was nothing more than a madman who put his schemes and plans ahead of his loved ones, which is revealed in large part by Zeke’s backstory. While I won’t shed a tear about the carnage Zeke caused throughout his time as the Beast Titan, seeing his origin story unfiltered paints Grisha in a new light, and it isn’t pretty. Zeke wasn’t brainwashed to report both he and his wife to the proper authorities. Zeke did that to save himself from years of mental abuse from Grisha over not being an exceptional warrior candidate. Grisha’s plan to overthrow Marley was to have Zeke infiltrate it, become a Titan Shifter, and then use that power to usurp Marley and return Eldians to their place on top of the food train. The disappointment and stress that Grisha put on Zeke was something that would involve any child-services department. It created an emotional response in which I ended up thinking, “I’m glad you ruined Grisha’s plan. He is a terrible human being,” which is in stark contrast to how I felt about Grisha during seasons one through three.

That isn’t to say this final revelation was entirely out of the blue. There were bread crumbs left throughout the previous seasons. After all, if he wanted to save the world with a plan that could help, why would he keep it a secret? He probably knew how extreme his views were and had to make sure he could mold others in his favor (like the audience). But a lot of this was tested when we found out that Eren ate his father to inherit the Founding Titan (which Grisha stole, by murdering many of the Reiss Family). Again, Grisha’s plan had to be put in motion, and he would do anything to make it happen. And all this time, viewers might have thought that this was in self-defense or to save humanity. But now, knowing the plans he had and seeing what he’d do to reach his goals, it was clearly nothing more than a carefully crafted image created to fool everyone.

Until now, Attack on Titan was a story where Eren wanted to save humanity from the menace of titans. While many characters seemed to be merely instinctual beasts, fans find out piece by piece that some have intelligence and are more than meets the eye. Grisha seemed to hint at this right at the beginning, and Erwin seemed to strive to figure this out. Now it seems as if much of Attack on Titan was false information, fed to us by Grisha. He wanted Eren to dismantle what Paradis had going on, attack Marley, and possibly keep all titans under their control forever (or kill them all off since Titan Shifters have a limited lifespan). Thanks to this final season, many things have flipped on its head, and while I will give some credit to good writing, it is still shocking to see it play out this way.

Information can be powerful and scary. It’s often weaponized in the real world. Grisha demonstrates that concept in spades and is an excellent example of how holding all the cards can be terrifying for others. Don’t forget, Paradis launched official military operations to get to obtain the information his father had in Eren’s basement. The entire island bent themselves backward for Grisha, and given how maniacal he was, it dramatically shows how intelligence can be used to obtain power. In history, the use of weaponized information has been, and continues to be, a huge concern. Currently, there is widespread distrust of the media and a view that the media does little to help itself. I  would hope that Attack on Titan could be a lesson for others to not simply take all information at face value. That you should do the research, and find out if the things you believe or feel coincide with the facts. Before the final season, I was all about helping Grisha and wanting to know what he did. But now that I know, I think it would have been better if the Marlayan soldier didn’t spare him at the border of Paradis. While there’d still be hardships and evil, I wouldn’t want to give Grisha what he wants, and that might be a bigger blow to him than anything.

And so this is how I conclude that Grisha is the main antagonist in Attack on Titan; he’s the personification of propaganda. He crafted an image that he presented both to his son Eren and the audience, making many, if not all, believe he was a savior that motivated Eren to help. Instead, we learned that he’s manipulative, a murderer; someone who should be locked up till the end of time. He used selective information to spur the events that led to the current plight of Attack on Titan. And that’s a frightening prospect, considering how the entire island fell for his plan. Grisha has been dead since episode two of season one. Yet, he was the driving force that turned everything on its head and made Eren go on a less than heroic path. And while I may have issues with Attack on Titan, I will say that the lesson learned here is extremely powerful and relevant to all of us.