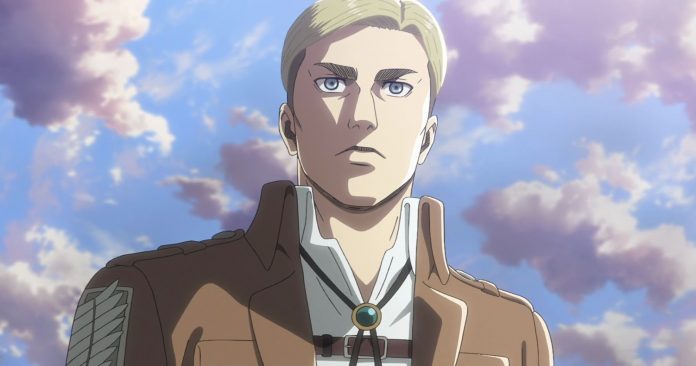 Commander Erwin Smith was the embodiment of leadership and sacrifice in Attack on Titan. During his time as Commander of the Scout Regiment, shocking information about the titans was revealed, which shaped the foundation of humanity’s search throughout the series. From identifying the Female Titan to discovering Eren Yeager’s ability to control them, the force that is the Scout Regiment is a reflection of its leader in Erwin. He was known for his willingness to take risks to complete missions all for the advancement of humanity. However, I found the retaking of Wall Maria especially poignant for Erwin, considering it was his last mission and what it represents in Attack on Titan. His final objective was to take Eren back to his childhood home and use the key his father left him to enter the basement of their home. The information there could bring salvation for humanity, and a level of understanding titans and possibly the world outside the walls. Many bet everything that the answers to the mysteries of this world would be answered in that basement. And due to Erwin’s inquisitive mind, he was willing to sacrifice everything for an answer, and it’s something that I found beautiful when watching Attack on Titan.

His desire for knowledge and view of sacrifice developed at a young age. During school hours, a history lesson didn’t seem right, so Erwin asked a question about people living outside the walls. The history teacher, who happened to be the future commander’s father, answered the entire class, but it didn’t sit well with Erwin, knowing how his father thinks. Which would lead to the audience thinking that Erwin’s father might be doing this to protect the younger minds he was in charge of molding. And that sentiment was correct. At home, Erwin’s father gave his honest answer about their lives inside the walls. He believed the king altered people’s memories in an effort for more control inside the walls. Erwin was blown away by his father’s theory that he shared it with his classmates. The consequences of sharing this information stir up the military police to then torture and kill his father, building a foundation that drove Erwin to who he is today. He turned this tragedy into his motivation to prove that his father’s theory was right, even if it meant sacrificing his soldiers. And while that isn’t always considered to be the best mentality for a leader, many subordinates identified with his ideology and were willing to sacrifice it all for more knowledge. Which as we can see, Erwin stood for entirely. It was Erwin’s selfish motivations to prove his father correct, that help turn him into a leader that many rallied behind. And Erwin realized the responsibility that fell on him fast.

Commander Erwin’s tragic backstory gives us a glimpse of how humans inside the walls were just as dangerous as the titans. Erwin became a cadet for the military. He joined the Scout Regiment and eventually rose the ranks to the commander. Entering the same regime that was responsible for killing his father, Erwin plotted how that would be the way to uncover the secrets the government was willing to kill to keep people quiet. He was ready to unravel all the lies and mysteries that plague this world. He did not want the death of his father to vanish from the lies the government told.

As stated earlier, the last mission Erwin would lead as commander was to retake Wall Maria and discover the secrets in Eren Yeager’s basement. And I feel it was a huge turning point in the story of Attack on Titan. Both objectives were viewed as vital components to bringing victories toward humanity’s cause for survival. With closing the opening created by the Armored Titan, and getting rid of the titans in that area, the survivors of the fall of Wall Maria would be able to return and begin restoring the Shiganshina District to help alleviate the stress of losing land and resources. Success in this final mission would also yield valuable information that was believed to be hidden in the basement in Eren’s home. Erwin thought that everything about the titans (like their mythology) would become abundantly clear, thanks to the experience Grisha Yeager had. Their findings would be an unprecedented discovery for humanity inside the walls so the success of this mission is imperative for their future.

Of course, as we all know, nothing is ever easy in Attack on Titan. As the Scout Regiment began retaking Wall Maria, they were met by the Armored, Colossal, and Beast Titan who were doing all they could to kill everyone. While grasping the difficulty the soldiers were facing and realizing how failure wasn’t an option, Commander Erwin sacrificed his life for the advancement of humanity. Despite having selfish reasons to learn more about their world, Erwin threw everything away for what he believed would be the best path for advancement. With the choice of either him or Armin living from the attack, the commander put the burden of saving everyone on Armin’s shoulders and gave up his life (which could be viewed as selfish, but I rather stick to the more heroic point of view). Knowing that he would not find out what important information was in Eren’s basement (if any at all), he graciously accepted his fate despite how his comrades like Levi felt. It is not easy to give up on a dream or a personal goal, especially when you are so close to success. But Erwin felt that for humanity to survive, he had to sacrifice his life to keep everyone alive.

Erwin doing this is the perfect symbol of Utilitarianism and truly sparks the discussion about what is the right choice when facing a situation like that? Or is it possible to live the way he did? Erwin gave up everything because he believed that people’s advancement would stagnate with him alive and Armin dying. Despite the progress he’s made for humanity, along with his essential intellect, Erwin was willing to die for the cause without much fuss. Like that, he gave up his will to live and quest for knowledge, thinking that his existence without certain individuals wasn’t worth the price. It’s these actions that made me more fond of Commander Erwin. He starts as the cold, calculating leader with a plan for every occasion, and looks like he barely cares about others. But getting to know his history, and seeing what he gave up for everyone else, is one of the more touching things I’ve seen in anime.

So the biggest question is, was the sacrifice Erwin made worth it in the end. Thankfully for everyone, the information that Grisha Yeager left answered the question a young Erwin asked his father in class. There is a world existing and thriving outside of the walls. We learn more about the titan’s history that the first king erased when he fled to the island, where he built the three walls. More is known about Subjects of Ymir, the race of people who can turn into titans, and were permanently turned into titans on the island as punishment by the government of Marley (another country) for crimes.

The success of Commander Erwin’s final mission restored the history of the people inside the walls. Everyone is no longer ignorant of what the government kept hidden for hundreds of years. More importantly, no one else would be killed for having a theory or getting close to the truth of their world. Commander Erwin’s ambition, bravery, appetite for learning, and willingness to sacrifice his life made him an unforgettable character who shaped the future of Attack on Titan. His leadership brought the idea that the titans were not humanity’s only enemy and was determined to take on anything that stopped his path to progress. He was a person who could survive in the world of titans but knew his limitations and made sure that humanity would be in a better place after he was gone. His noble sacrifice has touched the hearts of many fans, being a curious mind to the end.

“Excuse me….but how can we be sure that there aren’t other humans living somewhere far away from the walls?”