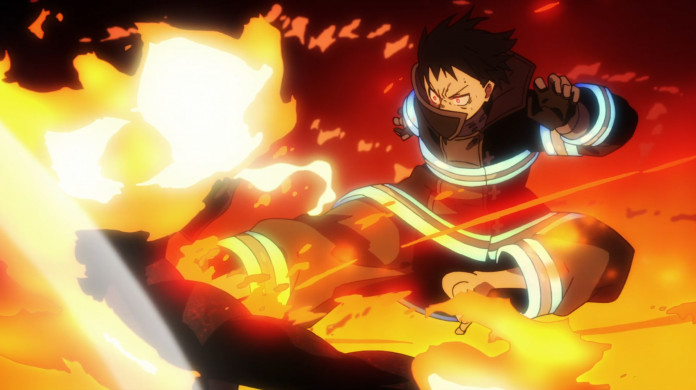 Fire Force came blazing onto the Toonami scene on July 27, 2019. Created by the writer of the well-known series Soul Eater, Atsushi Ōkubo, there was plenty of excitement for the new action series, especially after the two-episode premiere during Anime Expo. A few staff members of ours couldn’t contain their excitement during the sneak peek at the convention. Long-time Toonami fans will recall the 2013 airing of Soul Eater, a show where humans who transform into weapons are paired with wielders called meisters. With the familiar art style and character design, the spiritual successor of Soul Eater was a suitable addition to the block.

Fire Force began airing at midnight right after Attack on Titan. Remarkably it followed closely behind the FUNimation SimulDub broadcasts, part of a recent trend of Toonami programs airing newer content fresh from Japan alongside its streaming partners in the west. Though the series took a one-week break out of respect for the tragic fire at Kyoto Animation Studios, it quickly became a fan favorite due to its quality animation, well-executed action sequences, and character development. The adaptation of the manga by David Production (also known for adapting Jojo’s Bizarre Adventure) certainly delivered excellence with its colorful artwork and overall visually appealing aesthetics. Despite the fast-paced nature of the fights between characters, every movement is smoothly animated as the camera expertly transitions from dutch angle frames to traveling shots.

The series begins in the year 198 of the “new Solar Era,” with each episode providing a brief prologue about the history of the world. Special fire brigades consisting of pyrokinetics battle instances of spontaneous human combustion, a phenomenon where humans become beings of flame called infernals and wreak havoc, burning everything and everyone around them. There are eight companies of these special fire brigades, with Special Fire Force 8 being the show’s focus. Shinra Kusakabe is the protagonist, known for his ability to ignite flames from his feet, with the nickname “Devil’s footprints.” His powers emerged during a traumatic event 12 years prior in which both his mother and infant brother Sho were killed. Shinra is ostracized (due to an unfortunate nervous tick of his) and blamed for the incident, prompting him to firmly strive to become a hero and save others from the events which irrevocably changed his life.

While the tale of a rejected boy determined to become a hero may be a familiar trope to shōnen (and well-known on Toonami programming), in this case it fits perfectly to a setting and story that takes on many unique aspects; religious establishment, conspiracy, a mysterious history, and the very nature of faith and life itself all make up this rich world. Despite fire being the only element as a source for people’s abilities, it doesn’t seem to inhibit the variety in which flames are manipulated and utilized. There’s so much creativity in how characters’ powers manifest, and it’s a great mix of magical fantasy and scientific combustive properties. This element, along with its stunning visuals, and mix of drama, comedy, and action, made season one of Fire Force a great addition to the Toonami lineup.

Adding to its appeal was the weekly presence on Twitter of cast member Sara Roach who voices the character of Maki. While voice actors occasionally tune in to the airings of their respective shows, it isn’t often that one does so faithfully each week, despite the occasional lineup shuffling.

The plot of season one introduces the audience to Company 8: Akitaro Obi (Company captain who has no pyrokinetic abilities), Lieutenant Takehisa Hinawa, Platoon Leader Maki Oze, Holy Sol Temple representative Sister Iris, and the recruits Shinra and his rival Arthur Boyle. As season progresses, the mysterious White Clad emerge as antagonists who are inexplicably linked to the rise of infernals in recent years. Company 8 embarks on an investigation which reveals traitors among the companies, secret research conducted on infernals, and a conspiracy that could potentially affect the stability of the entire Tokyo Empire. The confrontations with infernals and White Clad (known as the Knights of the Ashen Flame) enable the series to develop fantastic action sequences showcasing each character’s various abilities and unique methods of manipulating fire. The viewers are also introduced to the concept of the Adolla burst, while revealing that Sho, Shinra’s lost brother, is in fact alive and has been brainwashed into becoming a leader among the White Clad ranks.

Season one finished airing in February of 2020, leaving fans impatient for the next chapter. However, with the COVID-19 virus impacting the globe, setbacks in production and recording were inevitable. When season two began airing in Japan in July of 2020, it was announced that the dub would not premiere on Toonami until later that year in October, the delay due to the need for actors to record from the safety of their homes. Many responded with optimism and support, especially since the announcement included that a replay of season one would air, providing an opportunity to refresh our memories on the complex plot and catch up on any episodes missed. When season two  finally aired in October, it did so with the now familiar disclaimer stating that actors had completed the majority of their work from home.

Season two picks up shortly after the events of the previous season’s confrontation between Shinra and Company 1 Commander Burns, who revealed details about the mysterious Adolla Link along with information about Shinra himself. As the series developed, it explored the history of The Great Cataclysm (which fans learn of during the prologue), the Evangelist, and the Amaterasu device. The Chinese peninsula arc was particularly revealing and gave the audience a glimpse into the world beyond Tokyo.

While action is a prominent feature of Fire Force, comedic interludes provide a lighthearted break during some of the more dramatic moments. One of these more amusing moments occurs during this arc, centered around Arthur, a character known for his delusions of himself as a “Knight-King.” He firmly sees all around him as players in the chivalric world of Arthurian Legend. The characters come upon an oasis in the middle of the desert where an exact duplicate of Tokyo’s Amaterasu device is discovered. Inside the thermal-powered device, the walls are covered in numerous digits, which at first glance have no meaning. Arthur quickly recognizes the numbers as the digits of pi (π ),  which in his mind is a coded tale of “Sir Cumference,” an amusing play on words. The number π (3.141…) is a mathematical constant defined as the ratio of a circle’s circumference to its diameter. In the episodes, we see the digits of pi carved into the Amaterasu unit, which I found especially curious. Today we require supercomputers to calculate the digits of π, going well into the trillions. I can’t help but wonder how those numbers were calculated without advanced computing technology, not to mention WHY they were written there in such a frenetic fashion. Moments like this contribute to the overall intrigue and mystery that draws the viewer into the world (something Fire Force did very well compared to other Toonami series).

Despite the comedic interludes, the series takes a much darker tone by the end of season two, with a brutal battle in the Nether in which multiple Fire Force Company members are slaughtered. The moment was undoubtedly shocking to viewers, garnering strong reactions on Twitter. Though incredibly jarring, the escalation in violence felt appropriate to the story. It raises the stakes and demonstrates the consequences of their battles with the Knights of the Ashen Flame.

Though there are many positive aspects of the series, critics of the show were quick to point out some drawbacks, namely regarding pacing and, most notably, the fanservice. Abrupt tonal changes and random fanservice shots detracted from Fire Force, especially with their increasing frequency and ill-timed usage. Explanations of complex plot points were rushed, as were training sequences for characters, making it look like they learned new abilities overnight. Past critiques of other long-running shōnen, such as One Piece and Naruto, have zeroed in on how fighting or training sequences are drawn out over several episodes. It struck me that David Productions seemed to have taken this criticism to heart and applied the opposite principle. Unfortunately, it does so at the expense of well-paced action and plot development, leaving the viewer with a strong sense of whiplash as we move abruptly between sequences.

A memorable episode where bad pacing meets overused fanservice is episode 18. It begins with a distraught Sister Iris questioning her faith after some troubling revelations about the Holy Sol temple. The scene has some notable dialogue about the very nature of faith and God Him/Herself (written by fellow staff member Sakaki). Suddenly, the episode shifts to Tamaki, and a previously defeated antagonist called Assault. A running gag in the series has Tamaki’s clothing spontaneously pop off her body, regardless of the circumstance. What perhaps began as an amusing instance of fanservice quickly devolved into a tiresome and obnoxious interruption since she continued to burst out of her clothes with greater frequency. In the episode with Assault, he is determined to overcome his sexual attraction to her by consuming vast amounts of pornography, theorizing this will make him immune to her charms. By itself, this sequence MIGHT have been somewhat amusing to viewers who enjoy fanservice, though this instance comes across as trite and vulgar. Coming right after a poignant discussion about faith and God, it felt especially ill-timed.

Though the fanservice is a feature in the first season, and being a trope of Atsushi Ōkubo’s other work, Soul Eater, it seemed more distracting and out of place in the second season of Fire Force. One possible explanation for this difference was a change in directors, with Tatsuma Minamikawa taking over for Yuki Yasa. Perhaps a variance in the style of direction made these sequences more prominent than they were initially.

Will there be a third season? While there is no news yet, plenty of story arcs are left in the manga for the anime to adapt. It’s also natural to assume that as the world re-enters normal processes post-Coronavirus, there will be some production delays. A long break before a potential season three might work in Fire Force and Toonami’s favor. With shows such as Samurai Jack and Attack on Titan, we have seen  how the hype can build up for a long-awaited series. Additionally, this would give the production studio ample opportunity to fix the issues with pacing and over-fanservice that detracted from the series.

In the meantime, how Fire Force will most likely be remembered by Toonami viewers with mixed feelings, though slanted towards favorable thanks in large part to Sara Roach’s faithful live-tweeting, also with how well it fared on social media. The series is very “gif-able,” and fans could grab a fun-looking snapshot at ease. Though there are several flaws that I mentioned earlier, the series seemed to gain traction through re-tweeted funny gifs and screencaps, not to mention the “vibe” tweet from the Toonami Faithful account which resonated with so many Fire Force fans!

Overall, Fire Force was a great addition to the Toonami lineup: shōnen, action-packed, and colorful. Even with fans’ frustrations with frequent fanservice and the whiplash effect from unexpected tonal changes, the quality animation and vibrant art style reminiscent of another Toonami favorite make it a memorable and fun series on the block.

If you want to hear more about this subject, check out the Toonami Faithful Podcast where our staff host Sara Roach, voice actress of the character Maki!