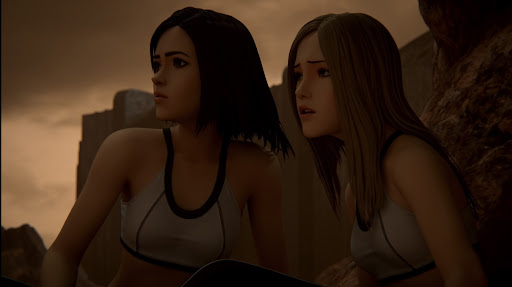 While not being a huge follower in the Blade Runner franchise, I’ve thrown my hat back into the ring for a new series to review weekly. While fellow staff writer Varun Gupta (VLordGTZ) did an amazing job kicking things off with his review of the first three episodes, due to real-life constraints, he would not be able to follow up with the series. But don’t fret Toonami Faithful readers, because I will pick up where he left off as I review the remaining episodes of Blade Runner: Black Lotus! I hope to do just as well as my colleague did, and once again ask for you all to allow me back onto your feeds with more reviews!

The previous episode revealed information on the data device Elle has been trying to decrypt for the past three episodes. The video (that we’ve seen flashbacks of) shows Senator Bannister, among others, hunting replicants who were created to be submissive to humans in what can only be described as murder for sport reminiscent of the movie, The Running Man. This video triggers Elle’s memories as most if not the entire episode focuses on these events, which would hopefully answer how Elle ended up where she did.

We return to Elle poolside, receiving a lotus tattoo from her boyfriend, asking her not to forget about him. However, we quickly see that Elle becomes more aware of her surroundings and is alone and begins to wander off, meeting with a group of people who share similar circumstances of being where they are. Elle befriends an individual (who we later find out is named Miu), and before they can explore to get some answers, a couple of bystanders are shot down by people riding ATVs. The situation becomes more and more disturbing because seeing people gunned down from what looked like pleasure placed a horrid taste in my mouth. Seeing others being hunted like animals is not pleasant, but it certainly created more of an emotional response than I was expecting in Blade Runner: Black Lotus. Luckily, Elle and Miu are able to get away safely and hide.

As Elle and Miu are out of the crosshair, they witness another replicant being taunted by one of the hunters as he unsuccessfully attempts to punch his aggressor and is killed for his trouble. It would appear that these replicants have the inability to defend themselves from human aggressors, making them easy targets for Senator Bannister and company. I’m not sure if that’s a current theme throughout the Blade Runner franchise, although I’m familiar with this type of fail-safe in artificial human life in other franchises. And it leads to a bevy of questions considering it’s the first that I’ve seen where humans took advantage of this.

The two replicants take this opportunity to steal one of the ATVs and are able to rescue two other replicants in the process! It’s hard not to cheer as the escape was happening, but viewers’ celebration was short-lived as the hunters caused the replicants to crash badly, leaving Elle and Miu as the only survivors. One of the hunters (the one recording this “hunt”) is left alone with Elle and Miu and provokes Elle into attacking him, knowing full well he is safe. The man continues to press his luck by taunting Elle and ends up murdering Mui to prove how “superior” he is to replicants. The tables finally turn when Elle’s pupils turn red (like the Terminator), and she fights back, killing her assailant. It was extremely satisfying to watch Elle take this man down just on the sheer notion because he kept pressing luck antagonizing our heroine. But overall, I’m glad Elle was able to escape out of that bleak situation, but I’m sad she experienced this treatment at all. And so I begin to wonder, what are the rights replicants have in this world? I’m not that well-versed in the property, so is this something that either happens now or happened before? But thanks to this, I’m more invested than ever.

We jump back to the present, where Joseph is able to restrain Elle as she goes on a violent outburst after remembering the horrible events. Elle eventually calms down, realizing that not only she’s a replicant but that Joseph was lying to protect her. Elle is now inspired to hunt down everyone involved who wronged her, with Joseph reluctantly agreeing to help her cause. We have our central conflict out in full force, and I cannot wait for it to play out. The episode ends at the police station, where Officer Davis believes this suspect  “Black Lotus” is a replicant due to her findings from Bannister’s murder. The chief quickly shoots her down and takes her off the case, but it would appear that he knows more than he is telling his officer.

Overall, this episode was more entertaining than I thought it would be! I’m glad the series revealed Elle’s past in four episodes instead of being dragged throughout the entire season. Now, Blade Runner: Black Lotus can move its story forward instead of doing what typical shounen series do by going back and forth between the past and present. It makes the story more focused on the present, with Elle seeking revenge on the people who caused her pain. It is a simple yet satisfying plot device to keep myself and hopefully others interested. And a topic that I don’t think is given enough credit from the Toonami audience is the voice acting. It’s a cast that isn’t heard in English dubs, and I’ve been pleased with the results! Stephen Root is no rookie (he voices Bill Dauterive in King of the Hill), and it’s a pleasure to hear him as the police chief. I can’t wait to listen to both Root and Jessica Henwick (Elle) when they will ultimately meet face to face. Next week, Elle and the police chief begin searching for one another, which should be an explosive episode!