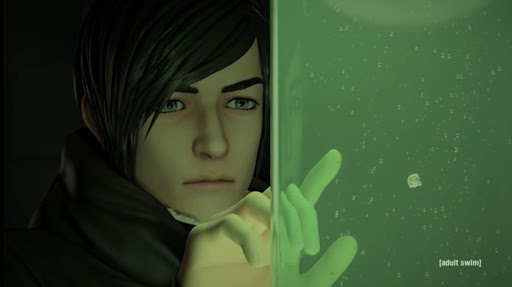 Wallace Jr. ascends to CEO of The Wallace Corporation as this week’s episode exposes his agenda with Joseph, Elle, and the future of replicants. Joseph is in a tough spot after Jr. gives a questionable final order, having to choose between ending or sustaining Elle’s life. Still haunted by her bad memories, Elle seeks Dr. M’s lab assistant Goodman, the “Memory Maker,” to help to see if it’s possible to erase a replicant’s unwanted memories. This episode is setting the stage for our heroine to face unforeseen obstacles, and I hope Elle’s fierce determination will make her victorious! Or she will end up facing the same fate her targets did.

The opening scene continues from last week’s phone conversation as Joseph seeks clarification on the next course of action, on retiring Elle. It appears Elle carried out Jr.’s wish to become CEO of The Wallace Corporation, which may have been the reason for her creation in the first place. Jr. has some grand scheme in mind, and his father was an obstacle for his dream to be a reality. I hope more is explored to learn the motives more clearly, because I find it fascinating. On the one hand, this can be viewed as a hostile takeover by a megalomaniac to create a society to his vision (as I’ll go into detail soon). But you can also look at how Jr. might be looking for a revolution of some sort for replicants since they’ve been treated rather poorly. Of course, his wanting to kill Elle might showcase that he doesn’t care about replicants, but it’s an interesting angle to ponder as we head toward the finale.

Joseph finds himself in a familiar position to retire a replicant he formed a bond with, and I’m curious whether he will fulfill this duty as he did in the past with the singer. After ending the call with Joseph, Jr. begins to elaborate about being free from his father to build an ideal world of perfect replicants. I wouldn’t say this confirmed much in the sense of what he wants to do with replicants, but it does hint that he’s more interested in using them for personal gain instead of creating a more peaceful society for them. We then see Jr. surrounded by containers of organisms appearing to be his version of replicants, a new replicant (a white-haired female who received a tattoo at the end of last week’s episode). She stands before Jr. during his speech, leaving me to wonder why and how she will be used to further the agenda to bring this “perfect” world into reality.

Back at Joseph’s apartment, Elle wants to ask Dr. M’s lab assistant, the “Memory Maker,” if he could help with her memories of Jr., which Joseph isn’t against but suggests her memories be rewritten or erased to start a new life. Goodman (the “Memory Maker”), surprised to hear from a replicant, meets with Elle and Joseph to discuss erasing memories, describing the process as being safe. Unfortunately, Elle won’t retain good memories but agrees to erase them all and enters the memory machine. Joseph decides to be there for Elle when she wakes up but breaks this promise soon after she appears to be asleep as he tells her the truth: Jr. is the man from her memory who created her to kill his father and hired Joseph to make sure she completed her mission. A tear rolls down Elle’s face as Joseph walks away, making this a bittersweet moment as Elle momentarily learns the truth before her memories are erased. Quite the selfish move from Joseph, who conveniently waited till after Elle was asleep to reveal this vital information. And it makes me wonder what his endgame is? It’s almost like he is purposefully choosing to hurt himself with the people he aligns with and jobs he accepts. I’m curious how he will handle letting down yet another replicant.

Joseph walks to a phone booth to report on her “retirement.” Playing along, Jr. relieves Joseph of his obligation but orders the new replicant to remove Elle permanently. But Jr. isn’t the only one who has a plan as Joseph calls Officer Davis to arrest Elle at Dr. M’s lab, admitting he wasn’t able to protect her anymore. Officer Davis begins to rush to Elle, but the new replicant has already arrived, ruthlessly slaughtering security guards. After entering the lab, the white-clothed replicant (Water Lily) continues her onslaught as she stabs the “Memory Maker” in his side, but he’s able to hit a button before he dies. I assume it helped Elle escape since she was not in the machine when the replicant sliced it in half. The episode ends with a standoff between Elle and the replicant, leaving fans in excitement and anticipation of what could be an exhilarating fight!

Overall, this was a thrilling episode from beginning to end, with a satisfying cliffhanger leading to next week’s episode. I’m interested in learning why Joseph called Marlowe about Elle, especially due to the history of the two, from his Blade Runner past to their more recent scuffle. Will Yun Lee’s performance as Joseph stood out to me the most because of the conflict he faced throughout the episode with trying to keep Elle safe and choosing to go against his powerful employer at the last minute. Lee has the gift of bringing emotion to a character who isn’t known to have his softer side on display. I’ve enjoyed the pacing of the past several episodes and hope it continues as I hope to see a jaw-dropping action sequence between the two replicants!