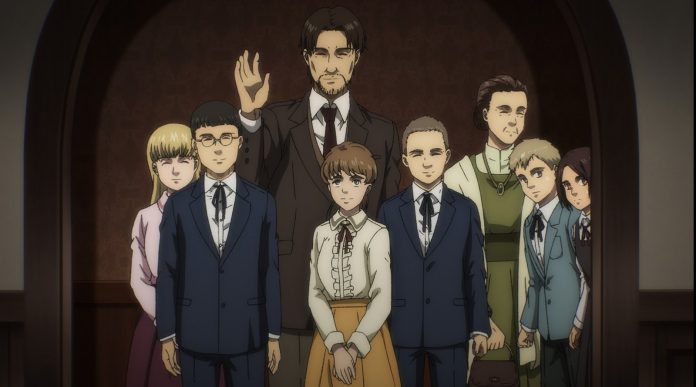 Episode 13 was an episode of reveals, as major plot points for Attack on Titan were revealed for fans to enjoy. It opens with Zeke revealing a significant secret about what happened to the people in Connie’s hometown of Ragako (after seeing everyone turn to titans back in season two). After learning Wall Rose was breached by titans, Connie went to his village and found his hometown had been attacked for those who might need a refresher. However, there was a belief that the titan around Connie’s house was his family member. Leading many to wonder how these titans showed up inside the walls. Zeke’s flashback reveals Marleyan soldiers released a gas consisting of Zeke’s spinal fluid, turning these citizens into titans, which included Connie’s mother. Zeke explains to Levi that his yell activates a “path” connecting all Eldians, turning them into titans after ingesting. It’s satisfying how Attack on Titan will come back to a mysterious event to explain how and why it happened when it’s relevant to the present storyline and continues to tie up any loose ends a viewer might have. Even after Zeke explains his actions, Levi coldly expresses his distaste for him as a person (even if he was acting as a double agent for Eldia). And it’s hard to argue with Levi’s point considering the carnage Zeke had caused even when he was young. Zeke doesn’t show any remorse for anything he’s done, despite how awful they were because he’s focused on his plan and is not letting anyone get in his way. And it begs the question, was it wise for Paradis to align with a man who will stop at nothing to get his way. It isn’t even to help Paradis; it’s just that their goals seem to coincide. It can lead to a scary end game that I think Hange might have noticed.

We later return to Gabi and Falco’s adventure as the Braus family arrive at a restaurant they were invited to attend. Ran by Niccolo (a Marleyan soldier), Kaya reassures both Falco and Gabi that he should be able to help them. Adding more fuel to this soon-to-be-lit powder keg, Hange, Armin, Mikasa, Connie, Jean, and Onyankopon arrive at the same restaurant to speak with Niccolo as Hange continues with her investigation. After escorting the Scouts to a separate dining room to wait, Niccolo quickly grabs a bottle of wine, rumored only to be served to high-ranking officers. Jean and Connie weren’t aware of this rule Niccolo had and sparked a heated exchange between Jean and Niccolo that was nasty to hear. You could see the visible confusion on both Connie and Jean, considering they didn’t believe that a bottle of wine would tick off Niccolo so much to go on a huge speech about how awful Paradis citizens are.

During dinner, Falco faked a stomach ache, with Gabi accompanying him to make sure he would recover. This became the moment for the two to meet privately with Niccolo as the two ventured into the wine cellar. Once all three were alone, Gabi proceeded to spill the beans about who they are (warrior candidates) and how both of them arrived on Paradis. As Gabi rambled on about how she murdered a female officer, Niccolo’s rage began to boil as Gabi continued to brag about her feat and revealed to Gabi that she killed the woman he loved. Thus began Niccolo’s counter-attack, nearly killing both Falco and Gabi in the process. I was on the edge of my seat watching Niccolo’s reaction to this confession, knowing how difficult it must have been to listen to the details of Sasha’s death. Niccolo did not take the news well as he grabbed the bottle of wine he took from Jean and swung at Gabi’s head! Falco (the sweetheart that he is) pushed Gabi to safety and took a devastating blow to his head. Gabi, shocked at Niccolo’s actions, begins taking punches straight to her face, and both are dragged to the open in front of the Braus family, revealing who the two kids were. This sequence was where Billy Kametz’s superb performance as Niccolo stood out to me because Sasha’s death cut deep due to his feelings for her. His passion in telling Gabi to shut up brought me (and probably EVERY Attack on Titan fan)  joy as Gabi began with her usual dialog about the “island devils.” Albeit it is a little poetic seeing Niccolo react like this, considering he had a similar speech with Jean and Connie.

Armin calls for the other Scouts to come to the Braus’ dining room as chaos ensues inside the restaurant. And adding more to the crazy moments, Mr. Braus asked for Niccolo to hand over his knife that was dangerously close to Gabi. At this point, I didn’t know Mr. Braus’ intentions were (would he murder her or not), but we learned he was not going to take revenge on Gabi. Instead, Mr. Braus gave a speech on adults taking responsibility and not allowing children to get into situations where it’s killed or be killed. As a mother, I don’t think I would’ve had the compassion and forgiveness Mr. Braus displayed being in the presence of the person responsible for my child’s death. It’s admirable. But seeing this and considering how dire the world is in Attack on Titan, I find it hard to believe that any parent would show this kind of restraint. Gabi should thank her lucky stars Mr. Braus has a compassionate heart and does not want revenge, which is a rare character trait in Attack on Titan since it’s a driving force in many characters such as herself and Eren. Listening to Jeremy Schwartz as Mr. Braus brings some fatherly wisdom in his performance with his voice sounding like a hug to soothe an environment with overwhelming tension.

On the other hand, Kaya does not share the same compassion as Mr. Braus as she attempts to kill Gabi with Niccolo’s knife. Seeing how rabid Kaya was to assault her made Mikasa’s save all the more impressive. Kaya’s screams and cries in agony might haunt some fans because you could hear the emotion coming from her. Those shrieks were something else and are completely understandable, considering how Kaya believed her and Gabi to be friends despite their rough patches. Lara Woodhull (Kaya) once again gives another emotional performance as Kaya’s heart breaks. She realizes Gabi took her “sister” away and continues to shine despite not being in as many episodes as other characters. As the commotion begins to de-escalate and Niccolo is in the Scout’s custody, he asks for Falco’s mouth to be washed out, revealing the wine contains Zeke’s spinal fluid (which creates even more panic)! This episode’s opening scene showed us the result of ingesting Zeke’s spinal fluid, meaning Falco could be in some trouble and turn into a titan!

When asked about why a wine bottle had Zeke’s spinal fluid, Niccolo confesses Yelena ordered the wine to be served to high-ranking officials—making this a possible plan for Yelena to take down Paradis to prop Eren as its leader. Onyankopon quickly denies knowing anything of this plan or that Yelena was the brainchild of this ploy. And as if things couldn’t get more chaotic, Eren suddenly appears with his hand cut, just like in Marley when he talked to Reiner. Floch and other Jaegarists accompanied him to the restaurant (another restaurant worker told the Jaegarists about the Scouts being there), taking Hange, Niccolo, Connie, Jean, Onyankopon, and the Braus family hostage in an attempt for the Jaegarists to gain more leverage. As Hange tries to warn Floch about the tainted wine, he shows no urgency and insinuates having known about this! Seeing how Floch is now is such a stark contrast to his demeanor back in season three, as Floch now looks ready to start an all-out war. The episode ends with Eren saying he wanted to talk to Armin and Mikasa, hitting Attack on Titan fans with yet another cliffhanger (I WANT TO KNOW WHAT HAPPENS SO BADLY)! Armin and Mikasa finally can talk to Eren, but I wonder if this conversation will be anything like the one Eren had with Reiner. I hope Eren can explain his actions and discuss the plan of meeting up with Zeke because, as the main hero for this story, he’s turning more and more like the main antagonist. These conversations tend not to end on a happy note, but we will see what’s in store for Eren, Mikasa, and Armin.