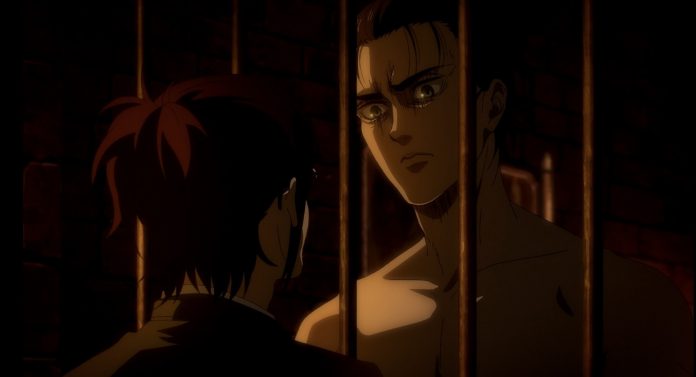 This week’s episode goes back back two years ago when Paradis Island welcomes their potential ally in the nation of Hizuru, led by Kiyomi Azumabito. You may recall Ms. Azumabito since earlier in the series, she attended Willy Tybur’s upscale dinner party, where she saved Udo from getting into trouble and spoke to Willy before getting onstage at the festival. Mikasa reveals a symbol on her wrist given by her mother, to which Ms. Azumabito tells the history of the marking. It’s a family crest of Hizuru’s shogun, whose son was an ally to the Eldian empire and frequently visited King Fritz on Paradis Island. After the Great Titan War, a child fathered by the shogun’s son was left behind after Hizuru’s defeat after the Great Titan War. This symbol links Mikasa as a descendant of the son of Hizuru’s shogun. Not only is this fascinating information about Mikasa’s family, we learn Paradis Island had at least one nation on its side.

Before Ms. Azumabito visited the island, she had a secret meeting with Zeke Jaegar regarding Hizuru’s assistance to help the Eldian people in exchange for a natural resource called iceburst stone (which fuels ODM gear). Zeke came up with a three-part plan requiring Hizuru’s assistance to protect Eldia by releasing a portion of the titans in the wall to show the dangerous potential of a full-scale rumbling. Second, this mini-rumbling would allow Paradis Island to catch up, being 100 years behind the rest of the world, by strengthening its army. And finally, Zeke will pass on the Beast Titan to a person with royal blood who would spend the 13 years having children assuring the Eldian people maintain the lineage of the Founding Titan. To my surprise, Historia agrees to inherit the Beast Titan, which Eren disagrees with Zeke’s plan and wants to find another way that won’t call for Historia to become a titan. Even though Zeke didn’t mention Historia, it seems his goal was intended for her to inherit his titan abilities because she’ll be the last remaining member of the royal bloodline after his death. It’s troubling how it appears Zeke is counting on Historia to sacrifice her life for the future of Eldia without speaking with her.

In the present, Commander Hange interrogates Eren in his cell regarding acting on his own with the island unprepared to go to war. Eren interrupts, reminding Hange he could use the War Hammer Titan ability to break out at any moment, and asks her to reveal whatever it is she can do to him. Hange leaves after breaking free from his grasp, which she questions Erwin about his choice to make her commander (I wonder how Erwin would handle this situation with Eren). Still in the present, we see a pregnant Historia sitting in a rocking chair (Historia is pregnant?! I’m sure Reiner is weeping somewhere). We learn the father of her child is someone from her childhood who works at her orphanage, atoning for bullying her while they were kids. The military officials, while drinking wine, aren’t happy with Historia’s decision, with one official going as far as blaming Yelena for encouraging Historia to get pregnant to prevent becoming a titan.

The episode then shifts back to two years ago; Commander Hange comes up with a plan to go to Marley after the Azumabitos cannot help trade with other countries because of their views of Paradis Island. After finishing working on a railroad with Misaka, Armin, Jean, Sasha (yes, we’re still seeing our Potato Girl in flashbacks), and Connie, Eren says a decision will need to be made on who will inherit his titan in five years. Each gives a reason why they should inherit his titan (the exchange between Sasha and Connie is hilarious!), but Eren says he doesn’t plan on giving his titan to any one of them because his friends are important to him, and he wants them to live long lives. This may also answer why Eren has been against Historia becoming a titan because she’s important to him and doesn’t want her future cut short due to her doing what others expect of her for the good of Eldia. This sentimental scene reminded me of how this group fought together since season one, so many understand why Eren wouldn’t want any of them to shorten their lives even when each was willing to inherit his titan. Seeing each of them blushing was heartwarming, but this tender moment was decimated by what’s occurring in the present. Jean and Connie don’t recognize the person Eren has become while Mikasa defends his actions in Marley. Connie brings up Eren laughing about Sasha’s death, which Armin recommends he and Mikasa talk to Eren to ask about his plans. Armin also mentions having titan serum will give them a chance to pick a trusted person to inherit the Founding Titan from Eren. I wonder if Armin will go into detail about his idea because Eren is not on the same page or even in the same book as everyone else, so this will be an exciting development.

The episode ends with a couple of Scouts drinking wine at a campsite in the woods with Captain Levi and Zeke. We know the tension between Levi and Zeke is thicker than a cold bowl of oatmeal, so it will be interesting to see how things play out in the forest. As mentioned before, Connie’s (Clifford Chapin) and Sasha’s (Megan Shipman) exchange about inheriting Eren’s titan was hilarious and proving each other’s point which we loved about their friendship. Chapin’s ability to bring emotions out of fans as he talks about Eren laughing about Sasha’s death was masterful because I was hurt and upset all over again, as Connie mentioned this. I hope next week’s episode gives us more details about Eren’s and Zeke’s plan as the military continues efforts to get answers.