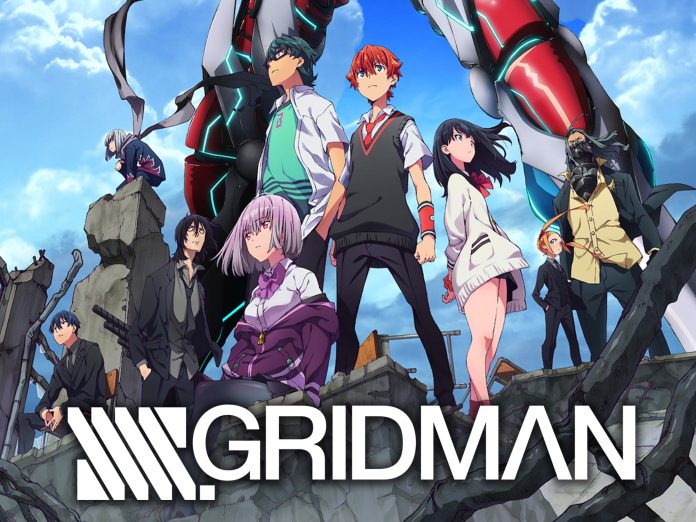 I was jazzed when Toonami announced that SSSS.Gridman (Gridman) would start airing in January of this year. A show with a giant robot animated by the talent at Studio Trigger? Sign me up! I added it to my Crunchyroll queue in 2018 but never got around to watching it, even with the wonderful character fan art and (to be expected of the internet) the thigh memes being passed around online. Gridman joining the Toonami lineup not only meant that I finally found the motivation to watch it, but also, due to my current position at Toonami Faithful, I had the opportunity to share the excitement of a new series and elements of otaku culture with Toonami fans as the show aired. (woohoo!).

Suppose you haven’t been watching SSSS.Gridman on Toonami, let me bring you up to speed. This show is an animated reboot of Gridman the Hyper Agent, a tokusatsu (live-action entertainment featuring heavy special effects) series created by Tsuburaya Productions that aired on television from 1993 to 1994 (in Japan). Gridman would later be adapted for American audiences by Dic Productions as Superhuman Samurai Syber Squad in 1994. The 2018 anime is animated by Studio Trigger (Promare, Kill La Kill, Little Witch Academia, etc.) and coincides with the 25th anniversary of the live-action series.

The story begins in Tsutsujidai with 15-year-old amnesiac Yuta Hibiki, who eventually meets a figure named Gridman through an old computer. Gridman tells Yuta that he must recover his memories to remember the mission he must fulfill. Meanwhile, kaiju begin to appear in the city and wreak havoc, causing Yuta and Gridman to merge to become a giant robot hero. With the help of the Gridman Alliance and the Neon Genesis Junior High School students (yes, they are intentionally named that) led by Samurai Calibur, Yuta begins his journey to recover his memory while also learning the actual cause of the kaiju appearances.

So far, I’m enjoying Gridman. However, there’s something that keeps it from being more than just good for me. At first, I couldn’t pinpoint why. The story is interesting, the animation looks good, and the dub is solid (which is especially important to me because I tend to be quite picky when it comes to English dubs). Shiro Sagisu’s score is lovely, as usual. Director Akira Amemiya’s energy is evident throughout, no doubt due to his tutelage under famed director and animator Hiroyuki Imaishi (Gurren Lagann, Kill la Kill, etc.). With talent like Amemiya, Hiroyuki Oshima, Shigeto Koyama, and others on staff, SSSS.Gridman is a good-looking show with a careful balance of energy and charisma maintained even in quiet moments.

So, what’s the hold-up? As I combed through responses to Toonami Faithful’s live-tweets to see other viewers’ reactions, there were some references in the show that I recognized and loved, but Toonami viewers interacting online didn’t seem to notice (or rarely noticed). Even then, there were many more homages and callbacks that I would never have picked up on if a handful of fans on Twitter didn’t point them out each week, which made the viewing experience even better. I started to realize what kept Gridman from making that extra leap to being great–not just for me, but likely for other new viewers as well. A fundamental aspect of enjoying this show relies on the viewer’s pre-existing knowledge of the original series and tropes of tokusatsu in general. To put it plainly, Gridman is a niche reboot founded in a lesser-known tokusatsu property, maybe even too niche for a television block like Toonami that has always been dedicated to curating a collection of under-the-radar animation.

Modern anime often take a multimedia approach for the sake of marketing to fans who want more. These materials can include audio dramas, art books, spin-off projects, and the original source material (manga, novels, live-action properties, etc.) . Usually, anime adaptations are crafted so that these materials seem like a bonus rather than a pre-requisite. For example, Pop Team Epic, an adaptation of the Pop Team Epic four-panel comics that aired on Toonami in 2018, is another anime that is somewhat niche but beloved by its fans. Despite being heavily laden with pop culture references and parodies, Pop Team Epic’s frenetic humor and strange skits give the same effect whether or not they fully understand what’s being referenced (which is not guaranteed even for people who read the source material).

Additionally, being a part of a multimedia franchise is not necessarily a detriment if the entry is self-contained, like Mobile Suit Gundam 0080: War In The Pocket, which aired on Toonami in 2001. Even though it’s part of the infamously convoluted, sprawling Gundam franchise, War In The Pocket can stand alone because viewers get all the relevant information they need to contextualize the plot without having to watch other Gundam shows.

Let me make this clear: of course, you can watch SSSS.Gridman if you don’t have prior knowledge of the topics listed. It would be hypocritical of me to say otherwise when my only knowledge about tokusatsu comes from friends who enjoy it and from pop culture communities.

However, when I was investigating these subjects better to appreciate the easter eggs heavily laden throughout the show, the barriers only increased. SSSS.Gridman is intended to be a separate entry within the Gridman universe from its live-action counterpart, yet it requires the viewer to be familiar with the original series. While that isn’t uncommon for anniversary projects like this, it can be a challenge for American viewers if they didn’t watch Super Human Samurai Squad in the 1990s or connect with an English-speaking tokusatsu community that recommends the original Gridman (which is highly unlikely since Gridman is not nearly as popular as tokusatsu heavyweights like Ultraman, Kamen Rider, and Super Sentai). You can’t even easily stream it. Gridman the Hyper Agent is available on Amazon Prime Video if you subscribe to a tokusatsu channel in addition to being a Prime member. Still, Syber Squad is nowhere to be found for legal streaming online.

Additionally, SSSS.Gridman’s treasure trove of homages and references to the original Gridman and its production team’s inspiration sources is a double-edged sword. Viewers unfamiliar with tokusatsu might not recognize that the heavy, clunky kaiju animation intentionally mimics the motions of monsters played by actors in cumbersome rubber costumes. They may miss that the Ultra series Utsumi constantly references is, in fact, Ultraman, the franchise that Gridman branched from in the first place. According to the very-thorough fan-made Gridman wiki, most if not all the kaiju designs are based on monsters from the original Gridman and various entries in the Ultraman franchise.

Recognizing an easter egg can elevate the viewing experience, especially if it refers to something the viewer already knows and loves. Some fans, like myself, love the thrill of an information deep-dive and consuming as much as they can about a piece of pop culture. However, having so many references and homages can make a show feel inaccessible to fans who prefer to enjoy stories that don’t demand “studying” to experience the plot to the fullest. That’s only regarding the references intentionally built into the show per Tsuburaya Productions’ input. This show is littered with otaku pop culture references and deep cuts–like toy and model kit companies (existing and defunct), legendary animator and director Masaomi Obari, and even the Transformers: Shattered Glass multiverse–that were included by Studio Trigger staff. Admittedly, I knew most of these easter eggs were present before I started watching Gridman, and they were the ones I enjoyed identifying the most.

Despite the barriers associated with it, SSSS.Gridman is a breath of fresh air in a lineup that hasn’t meshed with my tastes in anime since I started watching Toonami again last year. I’m glad that I finally watched it, and I won’t deny that being on Toonami is what pushed me to do so. Yet, as the series finale approaches, I can’t help but feel like this is a show that missed the mark for greater appeal and more profound connection with Toonami fans because of its nature as a dependent entry in a multimedia franchise and being an anime catered to people already deep in otaku culture.

Celia Rose is the social media manger for Toonami Faithful. When she isn’t crafting tweets and posts online, you can find her cosplaying @plantstwinkle.