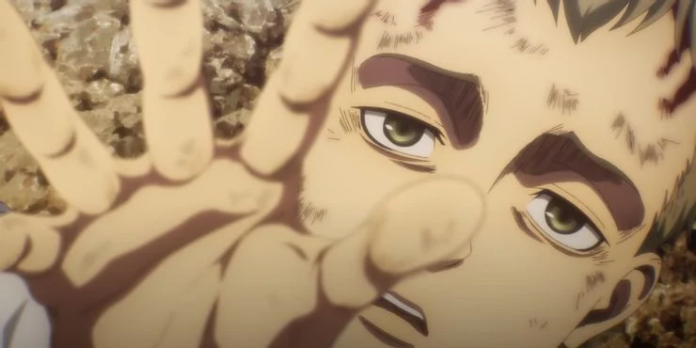 The season premiere of Attack on Titan is here! Fans have been anxiously awaiting the final season to debut since the trailer and key visual art were released. Fans didn’t have to wait long for dubbed episodes, adding to the fanfare of the anime. It brings me joy that a popular series such as Attack on Titan will be debuting the dubbed episodes on Toonami, much like the previous seasons have. However, I have the honor and privilege to review each episode of the final season for Toonami Faithful to give our fans my thoughts and feelings as the series progresses. Let’s get to it!

This season opens with a young boy named Falco telling a bird to fly away from the dangerous battle  that surrounds him, filled with gunfire and dead bodies. His older brother, Colt, comes to his rescue and both return to the trenches of their allies. This is when we learn the two sides of this war that has gone on for four years in Marley and the Mid-Eastern Allied Forces (with our two characters fighting on the side of Marley). Falco, along with three other children, are “warrior candidates” and being judged at this very moment (even in battle) to see who will inherit the Armored Titan ability (that fans would recall Reiner still has). Last season was when fans found out a lot of backstory when it comes to titan powers and how important they are. Most notably, whoever inherits the power of one of the nine titans will die in 13 years (and it might be getting close to this time for Reiner). During this time where Falco and Colt return to their group, one of the other candidates, Gabi, pours water on Falco’s head to bring him back to consciousness. She is the top contender to inherit the Armored Titan who is a fiery young girl prepared to destroy the Eldians on Paradis Island so the “good” Eldians can be free of internment zones (you’ll see what I mean later this season).

For those who aren’t familiar with all of the parties at play in this current season, the Mid-Eastern Allied Forces attacked Marley after learning about the loss of the Colossal and Female Titan. Since this weakened Marley’s military, this nation took this as an opportunity to use the weapons they have been developing to eliminate titans. Marley has to defend their nation from outside threats and maintain control over the remaining titans in their possession. You would think that Marley with the power of titans would be able to handle any opposition. However, the Mid-Easter Allied Forces own armored anti-Titan trains whose cannon shells are powerful enough to take out a titan by itself (which viewers get to see right off the bat). It’s the Mid-Eastern Allied Forces biggest threat to Marley’s titan army and why they are able to fend off the gifted individuals who can use a titan ability to fight. Colt attempts to convince Commander Magath to use the Jaw and Cart Titan to destroy the armored trains, but Magath is unwilling to take that risk due to the commander not wanting to lose any more titans. It’s at this time where we learn about the Paradis Island Operation to retake the Founding Titan nine years ago which resulted in losing the Colossal and Female Titan (and failing to recover the Founding Titan). Due to the loss Marley suffered, other nations took this as a chance to attack which is where we are now. Magath instills in Colt, who will inherit the Beast Titan later on, that the titan’s powers make Marley great, and needlessly wasting other titans is out of the question.

Gabi volunteers to complete the current mission of derailing an armored train using hand grenades instead of an 800 Eldian unit as a suicide squad, by pretending to surrender. After this, the Jaw and Cart Titan spring into action to finish destroying the railroad before they attack  from the sky. As Eldians fall from the airship, Zeke (the current Beast Titan) screams to turn other Eldians into titans thanks to Zeke’s power, creating a shower of titans falling to the enemy base. Not to be outdone, Reiner makes his triumphant return to action as he drops from the airship ready to strike. He takes out all of the cannons before another armored train appears and detaches one of his arms.

Much like Riener, I was surprised right along with him that another nation could develop a weapon that could pierce his armor (considering how thick it is). Gabi’s courageous act of derailing the railroad created an opening for the powerful titans to end the war. After this battle, a peace treaty was signed between Marley and the Mid-Eastern Allied Forces ending the war. As Marleyans are celebrating the victory, a mysterious man buys a copy of the paper and walks away while reading.

I’m eager to learn if this mysterious person is an enemy or ally which makes the storytelling amazing because we have seen in previous seasons that the line can get blurred on which side someone is on. Also, I’m curious to know what will happen after this war has ended especially since fans get to see civilization outside the walls! But I’m left to wonder what the ramifications of this recent victory for Marley will mean for Eren and those who were trapped behind the walls. On a more emotional aspect I love how this episode began with the intensity Attack on Titan is known to give us, which makes me excited for what the series has in store later. That sentiment helps create a wildly successful property. It is an adjustment to get used to MAPPA animating this season since before, WIT Studio was in charge of adapting this property. But the animation is still good, especially when it comes to the eyes. The character’s eyes have always been an important element of this anime and I’m glad MAPPA captured this feature in this episode, because it should help those worried about the studio transition losing the overall feel that Attack on Titan showed over the years. I’m anxious to see Eren and the rest of the Scout Regiment so we’ll have to be patient as the story progresses. Still, in typical Attack on Titan fashion, viewers are left with more questions than answers as we kick off the final season. What’s next for the nation of Marley, and with them being victorious, will there be a new discussion about retaking the Founding Titan? And the biggest question is how will Eren factor in this grueling war that’s taken place.