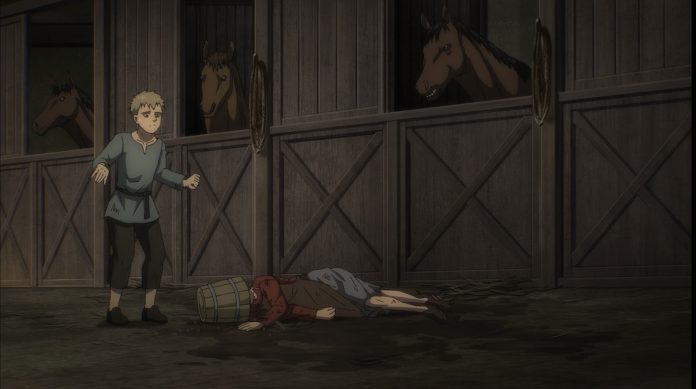 This week’s episode begins with a jailbreak! Gabi fakes a seizure and uses a hidden brick to continuously pummel the guard watching over them, which Falco stopped her attacks after the man had already died. As she and Falco escape, Gabi’s paranoia nature rears its head as she proclaims no one can be trusted, especially after learning of Zeke’s betrayal to Marley. Gabi has experienced significant losses with the destruction of her home in Liberio and witnessing her friends Udo and Zofia’s deaths, leading to her obsession with killing Eren, responsible for turning her life upside down. With Gabi being a seasoned survivalist (as we saw in her debut episode), her ability to escape comes as no surprise (with Falco following her).

After being on the run, the two begin to rest at a lake, where Falco tries to convince Gabi to remove the armband to hide their identity. This suggestion sparks a fury within Gabi who refuses mostly to prove she’s a “good” Eldian. Gabi believes she’s special compared to the Eldians who inhabit Paradis (whom she has been taught to hate) which probably stems from her being a candidate to inherit a titan. Gabi starts up a speech about how the removal of her armband would destroy her attempt to find peace for the Eldians of Marley. This attachment demonstrates how her superiors (and possibly citizens of Marley) have conditioned her into believing this awful narrative about Eldians in general (both from Marley and Paradis). This armband symbolizes the oppression of her people and the disgusting treatment she has received. However, she clings onto this symbol (almost like a stockholm-syndrome victim) to show she’s “good.” It falls into a rather dark conversation and makes me wonder what her definition of “good” is. While Gabi might argue what she’s done is in self-defense, she certainly has a lot of blood on her hands that could easily be viewed as vile, which is similar to how she would describe Eren. But this continued comparison of the two becomes more and more present with each passing episode, which this conversation highlighted beautifully.

As the two fugitives continue to rest, a young girl finds Gabi and Falco and invites them to her home at Braus Stables (isn’t the last name familiar?). Gabi’s behavior continues to devolve even after being taken in by this family that showed her a tremendous amount of kindness. Gabi’s paranoia streak continued after a distasteful display when she smacked Mrs. Braus’ hand away from touching her head and her fear of eating the food offered. Marley’s education for Gabi has completely warped her mind into thinking that every person from Paradis is a devil. Which could lead one to wonder what Gabi will do as time moves forward.

Back at a Paradis port, Ms. Azumabito congratulates Premier Zachary on the attack on Liberio. Ms. Azumabito presents to him a flying boat made possible by the iceburst stone given to Hizuru from the island. But all isn’t perfect on Paradis due to soldiers leaking Eren’s detainment to the public. Hange questions three recruits of the military caught and a veteran Scout member, Floch, regarding these leaks. Floch (as well as the other recruits) view Eren as a hero that should be revered by all (almost like a God), not a criminal, and wanted to spread the information about his arrest to help gain more support for their ideology. And while Hange might agree that arresting Eren is a bit too much, she still plans to hold these four accountable for leaking military information to the press. Hange isn’t opposed to Zeke’s plan (which continues to use Eren as the key component), but not knowing every detail has led to her being a bit more cautious with how she’s approaching using Eren. Could everyone’s favorite titan-shifter be using these four to get citizens on his side and many more through the press? Or maybe it’s someone else who wants to create panic within Paradis. It’s a clever tactic to put pressure on the military to release a person seen as a hero and one that has been used even in real life. But considering how Eren has had many people cast judgement on how to utilize him (whether they be supporters or detractors), this recent conflict has upped the tension even more.

Adding to the potential confusion, Commander Pyxis is heading an additional investigation on Yelena, mentioning how 10 months ago Eren began acting independently. What’s key about this fact is that Yelena and Eren’s lodging were close after the opening of the railway in Trost, creating a plausible connection of the two potentially beginning a partnership. Could Yelena be involved in Eren and Zeke’s plan? And does this change the overall goal of what Paradis wants? It’ll be interesting to see how this storyline plays out in the last few episodes.

Back at the Straus stable, a young girl named Kaya brings Gabi and Falco (who are now going by Mia and Ben) to her old village and drops a bomb stating how she knows the two are from Marley. Kaya during this dramatic turn of events shows them her old home, reliving the moment of watching her mother being eaten by a titan. This revelation leads to a heated exchange between Kaya and Gabi as they express their issues with one another. Gabi hates Paradis and believes that everyone on the island are savage monsters who have terrorized the entire world. At the same time, Kaya expresses how her mother didn’t do anything awful to anyone, and wonders why she needed to die. The conversation hit a chord with me on a level that is rarely seen in anime. I can relate to the feeling of being held accountable for the actions of an entire race. When looking at certain individuals in power in the U.S., it’s easy to spot how if one person of color acts out, they brush all people of color with the same cloth which leads to being seen as guilty before innocent rather than the other way around. It’s even worse considering how minorities aren’t allowed to forget these types of instances, and continue to face problems that this generalization creates. So I can sympathize with Kaya, because while her ancestors might have done truly despicable things, they themselves have been living a normal, dare I say, virtuous life afterward. The best example I can think is how citizens of Germany live their life now, considering what the past of the country was like during World War II. But it was at this conversation where the English dub shined in ways that felt so satisfying. Both actresses Lara Woodhull (Kaya) and Lindsey Seidel (Gabi) unleashed the flood of emotions required for this scene. Woodhull’s performance of questioning everything Gabi was spewing at her regarding Eldians was superb and brought the necessary reflection of judging people’s race.

Once things settle down a bit (where Gabi looked like she was going to kill Kaya), the three continue to chat and learn about Kaya’s past. She mentioned how she was able to escape death from a titan thanks to Sasha’s efforts (which fans saw in season two!), creating an interesting dynamic where we see someone Sasha saved living with her family and the murderer of Sasha under the same roof.

The post-credit scene takes us to Marley, where Magath tells Reiner, Pieck, Gilliard, and Colt that Zeke is a traitor. As part of a global alliance, an attack on Paradis Island will take place in six months. Reiner believes Marley should show more urgency since he’s worked with Zeke and should assault Paradis much sooner than that, leading to a very tense end to the episode. We will see if Magath agrees with Reiner on going forward with a counterattack.