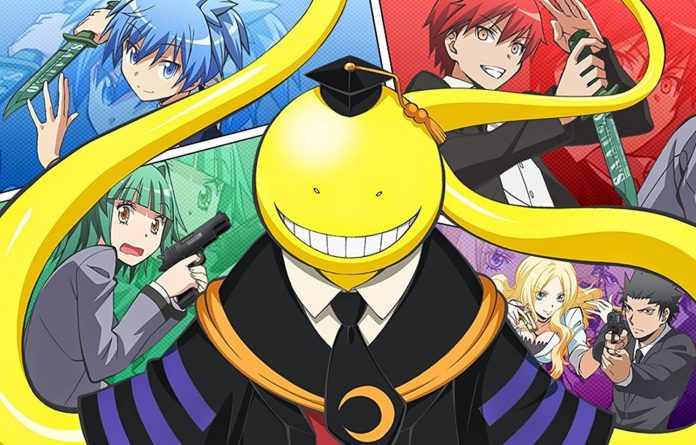 As the saying goes: “Good things come to those who wait.” For fans who wanted Koro-sensei and the students of Class 3-E to join the Saturday night lineup, their hopes were finally realized. On Thursday, Toonami announced that Assassination Classroom will join the block beginning on Aug. 29, at 1:00 a.m. Eastern. The encore run of Fire Force will move to 2:00 a.m., replacing the spot vacated by Ballmasterz 9000. A full look at the new schedule can be seen below.

The hit anime and manga series by Yūsei Matsui, Assassination Classroom, was serialized in the Weekly Shonen Jump magazine from July 2, 2012, to March 25, 2016, with 180 chapters in 21 volumes. It’s popularity led to the creation of a 47-episode (in addition to 1 OVA) anime series by Studio Lerche, running on Fuji TV from January 9, 2015 to June 30, 2016. Assassination Classroom’s English dub can also be found on FUNimationNow.

“Kunugigaoka Middle School have a special class 3-E. Their sensei is a weird combination of ALIEN and octopus that moves at the speed of Mach-20 and the one who is responsible for destroying the half of the moon which now forever stays at crescent shape. The creature will teach the class 3-E how to assassinate him before the end of the year when he will destroy the Earth.”

Some of the reactions to the news from fans as well as those who have worked on the show can be seen in the moment below:

Correction: Originally, the title of this article stated that Assassination Classroom would air this Labor Day Weekend. It will air the weekend before Labor Day weekend on Aug. 29.

Are you glad to see Koro-sensei and his students finally join Toonami? Let us know by commenting below or directly on our social media. And be sure to follow us on @ToonamiNews and subscribe to our podcast on Soundcloud for future content and breaking news updates.