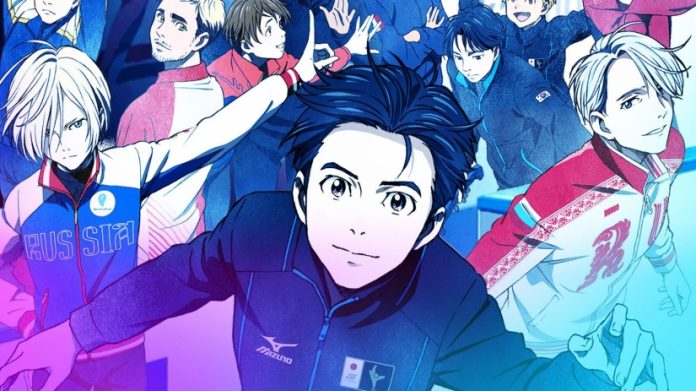 I look back at 2016 as one of my favorite years when talking about anime. There seemed to be a great show popping up every season, and a ton that fans still love today. My Hero Academia began, which is now a worldwide phenomenon, and Re: Zero debuted, taking the anime world by storm. However, there was another anime that became iconic to me and grabbed viewers hearts in a way that is rarely seen in anime. That show is Yuri!!! on Ice, and it is difficult for me not to mention how its legacy is far-reaching, thanks to how many pro ice skaters talked about it.  There’s a reason why so many people became fans of it, despite it being a sports anime (which typically isn’t popular). It brought tears to one’s eyes and told a beautiful story that all can relate to.

Yuri!!! on Ice is a tale in which fans follow pro figure skater, Yuri Katsuki. We begin as Yuri bombs at the Grand Prix Finals and feels like his love for ice skating is gone, resulting in him feeling that he is useless. Despite being a massive fan of the sport when he was younger and potentially getting the chance to compete against his idol Victor Nikiforov, his world is at a crossroads as he wonders if he can still compete in figure skating. To his surprise, as he tries to find an answer back in Japan, his childhood idol Victor shows up to his house (after watching a viral video of Yuri copying one of his recent programs perfectly) and decides to coach Yuri to become a better skater. This leads to a significant disruption in the ice skating world, with Victor taking a year off to be Yuri’s coach (even having his fellow Russian skaters perplexed about this decision). We follow both Yuri’s journey to become a better skater and Victor’s, who learns more about himself along the way.

The journey through 12 episodes is an emotional roller coaster that makes it hard to walk away from. What resonated with viewers to make Yuri!!! on Ice a massive favorite among fans and ice skating enthusiasts was how relatable the characters were, as well as how realistically they were portrayed. We’ve all been where Yuri is when everything seems hopeless. You feel alone and that no one can help or understand where you are coming from. You can understand the pain Yuri went through not being able to make those who root for him proud. But what’s more important is how he climbs back from those downs. It isn’t easy, as Yuri’s confidence fluctuates despite Victor’s support. Yuri was easy to root for, because of how well his character was written. The same can be said for Victor. Skating comes naturally to him, but not coaching. He discovers he has more emotions than he’s ever felt before, all because of his choice to coach Yuri. Did that prove his choice to coach Yuri was right? Overall I’d say yes, but Victor took a huge chance and had to have felt nervous about everything that was going on.

The setting, especially how skaters’ mindsets are before, during, and after a competition was spot on. It depicts the self-doubt that creeps in, as well as the confidence that one can feel during events. The pressure can be overwhelming and cause a skater to react negatively. Plus, with all the social media posting, it made this series feel as if you were watching a live-action show about ice skating. The writer certainly did a great job researching all aspects of figure skating, to make those who may not be familiar with it see a clear picture of all things that happen in that circle. To the point where even pro figure skaters endorsed the anime and had an Olympic pair perform a routine to a song of the series.

What popped out from the start was how well animated the skater’s programs were. Being able to draw and animate those scenes, in particular, had to have been one of the toughest challenges for Mappa. The short programs and free programs all looked smooth and breathtaking (all but one performance). The way each skater looked during the performances became must-see television as it happened. Combine that with the outfits and the music, this series was hard to stop watching, which is significant considering this anime is about figure skating. There usually needs to be a draw to get people to stick around and watch. Yuri!!! on Ice had a lot going for it with the drama between Yuri, Victor, and Yuri Plisetsky (Yurio), but having beautiful programs to watch became the “action” of the series that were also its greatest highlights.

New anime review up today! I wrote about Yuri!!! on Ice's new limited edition blu-ray and why I think the show had such a profound impact on people (including me). https://t.co/01YrW4SIfb pic.twitter.com/MW3VibtA8Q

It’s a testament to the series how much fans loved it, considering it’s about a niche sport. Ice skating through my lens (which is biased) only becomes important when the Winter Olympics are going on. I do know that there are all kinds of championship series that go on year round (in fact Yuri!!! on Ice talks about an ice skaters’ season), but it isn’t nearly as popular as soccer, football, or basketball. As a sports fan, I found myself wondering why I cared as much about Yuri’s short program score as I did during a playoff game for the Patriots. It’s because of the relatable characters, of the bond that developed between Yuri and Victor, and because the audience learns about the motivations behind the final six skaters in the Grand Prix Final, all of which it captivates us.

Besides watching the relationship between Yuri and Victor grow (which was a fantastic love story to watch), I was just as intrigued seeing Yuri Plisetsky (Yurio) grow as a young skater. He loves that his grandfather shows up to his events, and seeing him overcome with emotion, knowing that his program was the best he’s ever done, it showed a vulnerable side of him that he didn’t even know he had. He made a new friend, a fellow skater (which he rarely does) and grew so much as a person as he learns that Yurio is no longer the top dog in skating now that’s he’s in the senior division. Christophe also showed some excellent character development considering his age (in the skating world) and his belief that with Victor gone, no one could challenge him. Jean-Jacques Leroy even got a small dose of character development after he choked at the Grand Prix Final. You’d be hard-pressed to find a prominent character not given a chance to shine and grow as they went along.

As far as the English dub is concerned, I can’t imagine a better cast for this series. Not only did the actors give incredible performances, but the direction given by Sonny Strait (the ADR Director) was flawless. Josh Grelle as the voice of Yuri fit very naturally also showing how far his range can go. He nailed all of Yuri’s highs and lows. You felt as if Grelle is Yuri and just reliving his story. I loved the Russian accents that Jerry Jewell, Micah Solusod, Monica Rial, and Caitlin Glass were able to demonstrate which added to its authenticity. Jewell did a great job as Victor; which was tough when considering how “perfect” Victor was for most of the series. It wasn’t until the more tender moments during his time with Yuri in the later stages when Jewell flexes his acting muscle. I do think, overall, that Micah Solusod was the highlight of this dub bringing considerable energy to Yuri (Yurio). Solusod had to not only give his character a strong Russian accent, but also simultaneously sound angry/angsty, which couldn’t have been easy. He brought Yurio to life and stood out to me. Not to be outdone was Colleen Clickenbeard as the supporting character Minako Okukawa. She was great at the beginning when she did more than cheer from the stands.

FUNimation gave Yuri!!! on Ice a wonderful limited edition release that includes an 80-page booklet, a cool badge, a Yuri keychain, character art cards, and a necklace. Plus, the box art for the series grabs viewers eyes with its snowflakes and sparkles. It comes with a few extras that I’m sure many Yuri!!! on Ice fans will love to get their hands on, such as an English cast discussion of the series, textless openings and closings (with two different versions), a commentary for episode 11 (which includes a large portion of the cast), a textless closing skate for episode 12, a textless closing for episode 10, and a Yuri Plisetsky Grand Prix Final celebratory skate (which was absolutely insane to watch— it’s a must see).

Something you might have noticed is that I haven’t talked about what I didn’t like about Yuri!!! on Ice. That’s because there’s hardly anything I’d change with this series. I loved the ice skating and felt there was the right amount; it didn’t bore me nor was it oversaturated. I enjoyed the characters and the growth that we got to see during this time. Even the supporting characters made me smile throughout. I loved the journey we see Yuri go through with the help of not only Victor but his friends. The animation was nearly flawless, and the music had me in tears (especially when listening to Yuri’s free program music). My only complaint? That there isn’t a second season to see how Yuri and Victor’s relationship changes with the two competing together (or possibly against each other). But it all honesty, this series was nearly perfect, and you don’t get to say that too often.

Overall, I understand why Yuri!!! on Ice spoke to so many fans both in and out of anime. It told a beautiful story that was a tasteful, given how same-sex relationships can sometimes be portrayed in anime. It felt realistic, which is a testament to the story and how well it was written. The skating was the kind of action that many could get behind, and the drama between Yuri and Victor was what made a lot of people stick around. While I like some stuff that other shows provide, Yuri!!! on Ice felt like a series that did everything in anime right. There isn’t anything to complain about. All I can say is that Yuri!!! on Ice is something that anyone can enjoy, and could even make someone into an ice skating fan. So if you haven’t seen it, I implore you to check out an anime that turned 2016 into one of the stronger years of anime.

Cons: No second season on the horizon.