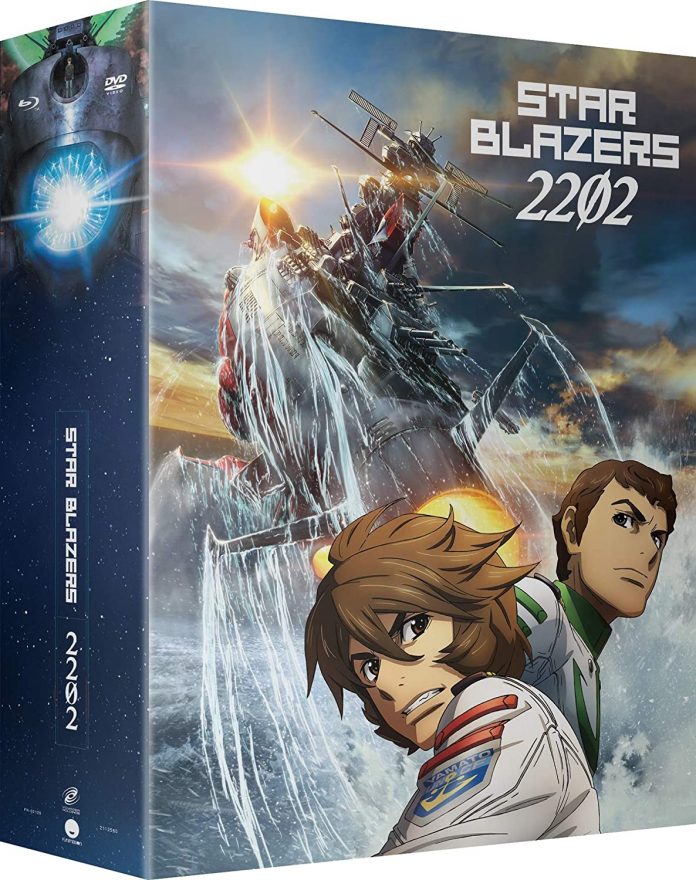 It’s exciting when a good series has another season. I immensely enjoyed Star Blazers: Battleship Yamato 2199, and finding out that there were more episodes for a franchise I had missed out on, gave me the biggest smile. What would fans see now that we are three years in the future, after the human race survived an intergalactic war with Gamillas? Although you could dub it “Star Trek the anime,” I find the characters and story to be the real driving force in this anime. It has become one of my favorite properties, so getting to see more is exhilarating. But, does Star Blazers continue giving fans a treat, or should they have stopped after the first season?

As the title of the series suggests, the human race has progressed since their victory against Gamillas. Three years after the war, the two sides now coexist after a peace treaty was signed. They continue to work together to reconstruct both planets and strengthen their respective military, thanks to the wave motion gun. However, Susumu Kodai and the rest of the Yamato crew receive a weird message from a Goddess known as Teressa asking for help. Kodai later finds out that both the human race and Gamillians are using the wave motion gun to create warships (Andromada class ships) that break a promise the Yamato crew made with Starsha of Iskandar. Kodai gets worked up even more when he’s shown a “time vault,” where both the humans and Gamillians were building more Andromada ships and expanding their military prowess.

To make matters worse, a new military alien race, Gatlantians, starts to wreak havoc in the galaxy with both humans and Gamillians in their crosshairs. Despite not having the military’s backing, Susumu enlists the crew of the Yamato to help after everyone received a message from Teressa and they head to Telezart. They hope to find a way to stop the Gatlantian’s attack against the star system. Despite going AWOL, the Yamato crew presses on and decides that stopping this new threat is critical to everyone’s survival.

So the Yamato crew once again travels through space reach Telezart but are sidetracked when the Gatlantians attacking the newly colonized planet with both humans and Gamillians. Due to the surprise attack, the Yamato rushes to the planet’s aid and ends up fending off the Gatlantians, thanks in large part to Kodai’s use of the wave motion gun. And while the Yamato crew has survived attacks from Gatlantis left and right, saving Telezart might prove harder than any of them realize.

Surprisingly Star Blazers: Space Battleship Yamato 2202 was a lot more compact in these first 13 episodes than I realized. There are so much info and storylines to keep track of that it started to create an information overload. I was able to keep things straight, seeing how both humans and Gamillians were now at peace and helping each other out according to their peace treaty. And I wasn’t surprised that both governments were using the wave motion technology for nefarious purposes, much like any government entity in anime. After all, peace was reached, and both planets would want to do whatever they could to protect themselves. But the power has shifted each government’s views, making both more aggressive in adding to their military capabilities. And I understood the need to have another alien race, the Gatlantians, join the fray hell-bent on conquest (just like the Gamillans were). But the character stories throughout the first 13 episodes were where things got muddied for me. The newly colonized planet of humans and Gamillians added more people than I would’ve wanted, including the military. They joined the Yamato during their fight against the Galatians, creating a new group that grabbed viewers’ attention (mostly since they didn’t mesh cleanly with the Yamato crew). The Gamillian ambassador who joined the Yamato seemed to be a double agent, adding another element to the story that felt a bit much. And a Gatlantian priestess who holds a lot of power for her planet, sneaks onto the Yamato to abduct Kodai in some ruins, and deals with a split personality issue making things become super convoluted. It felt like this second season was adding too much. While the anime itself seems to be paced slowly, the piling on information meant that there needs to be even more time to digest everything thoroughly, because it felt like a lot.

That isn’t to say I think the story is terrible. Quite the contrary, I think the storytelling is one of Star Blazer’s best attributes. Not only do I believe it accurately portrays how government officials act when given more power than they can handle, but I also love seeing how the crew of the Yamato grows. Susumu Kodai is now the captain of the Yamato without any guidance. It’s his journey, and while I do think he could have done a better job, it’s fascinating to see how he’s developed after three years. Kodai needs to do some soul searching after the blunders he’s committed so far, (such as not wanting Yuki Mori to be on the voyage, allowing himself to be captured, and being willing to sacrifice innocent lives to save Yuki). It seems a lot easier to go against his planet than anything else he’s dealt with during his travel. But in turn, these shortcomings make the character seem more real. I wouldn’t like it if Kodai became the perfect captain; it’d be boring. Hopefully, he can learn from his mistakes and lead the Yamato more confidently, but time will tell in the next half of this season.

And there seem to be more battles or fighting in this season. Unlike always having space battles (more on that later), it was a nice change of pace to see some hand-to-hand combat, as well as some battles where infantry would take on spaceships or destroyers. The atmosphere that Star Blazers created felt more realistic and was something I appreciated.  Plus, the space battles were nicely done. It’s something Star Blazers does well, and seeing them in this second season didn’t disappoint. Easily the highlight of the series was when the Yamato exits out of warp space and ends up being surrounded by nothing but a Gatlantis fleet, which created a feeling a dread that I’m not sure could be replicated. But whenever the series would shift toward space battles, I found myself more entranced with the series. They’re nothing like Toonami fans expect from Outlaw Star, but every conflict’s overall realism enhanced the viewing experience.

The English cast reprises their roles from season one and sounds just as stellar as they did when they were all first brought into the project. It was beautiful to hear both Christopher Wehkamp and Mallorie Rodak continue as both Kodai and Yuki, especially since the two characters are a lot more intimate with each other. However, the most significant nod is to a newcomer to the cast— Colleen Clinkenbeard as Sifer Sabera/Toko Katsuragi. Her performance stood out, sounding like Ezra Scarlett from Fairy Tail, only more conniving and evil. Getting to hear Clinkenbeard perform as a villain was a huge treat. I’m more used to hearing her as plucky shōnen leads such as Luffy or Gohan (Dragon Ball Z Kai dub), as well as the femme fatale hero Erza or Android 18 (Dragon Ball Z Kai dub). Getting to hear her in a role that was more nefarious jumped out to me. But Star Blazers has had an overall fantastic cast, so I’d be more surprised if anyone slipped from their previous rendition.

FUNimation did an excellent job with the limited edition box for Star Blazers 2202. Much like the previous set, the licensing company gave it the same look, which will easily make any shelf stand out with its holographic properties. It included some art cards for extras and an art booklet to show off character profiles, amazing pictures from the anime, and some original artwork. Overall, this limited edition release is well worth the price tag, and it is easily one of the better limited-edition boxes FUNimation has produced.

I cannot wait to sit down and finish the second half of this season of Star Blazers, mostly to see how the Yamato crew handles both the Galatians and their government. Right now, it feels like the crew aboard the Yamato is the only guiding light in this universe. And seeing what becomes of Sifer Sabera as well as the Galatian people has me excited. Will Kodai utilize the wave motion gun more? And how will his philosophy change as his journey continue? Those are the biggest questions that I want to be answered, and I cannot wait to see more. Plus, getting to hear the fantastic cast makes the viewing experience even better. As of now, I can confidently say that this franchise has become one of FUNimation’s strongest.

Cons: Felt like a lot of story elements were getting jammed in with only 13 episodes to show for it.