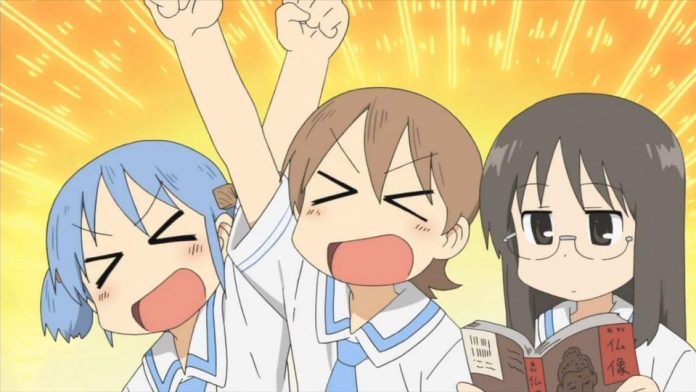 Have you ever told your friends a true story that sounded so unbelievable that you yourself started to question if it happened? That’s practically the only way I can summarize my experience watching Nichijou – My Ordinary Life. Even then, that description doesn’t do it enough justice. I never realized how difficult it was to describe it to somebody who hasn’t seen it. There’s no way not to make this series sound like a twelve-year-old’s crazy fanfiction.

Nichijou is the story of “ordinary” people in an “ordinary” town. Yes, regular, everyday folks, such as a yaoi fangirl with anger issues and mean martial art skills, an eight-year-old super-genius, a tsundere that unloads (non-lethal) explosives towards the object of her affection, and many other “average” people.

The cast of Nichijou is relatively massive, with over fifteen regularly appearing characters, each with their own stories and sketches. That’s a lot of characters to handle for one slice of life anime, but given the series’s hectic and scatterbrained nature, it never feels overwhelming.

Our main three stooges are high school girls riding the waves of life. Yuuko Aioi is the resident jokester responsible for many of the hilarious goings-on. Yuuko isn’t too bright and sometimes too self-serving for her own good, but she’s got a good heart. Mio Naganohara plays the straight man to Yuuko. She seems to have it together, but underneath her descriptive sensibility lies a short-tempered, yaoi obsessed monster who’s not afraid to throw hands at anybody in range. As for Mai Minakami, to quote a famous starfish: “the inner machinations of [her] mind are an enigma.” Mai is a silent, stone-faced troll with a strange obsession with buddha statues. She’s way more observant and cunning than she lets on, always pulling out a prop the moment you take your eyes off her. What happens when you mix all three of them together? You get total cacophony, utter chaos, and immaculate chemistry. The way these three play off each other is nothing short of hilarious.

The Shinonome family (Hakase the child inventor, Nano the robo-girl, and Sakamoto, a cat that wears a red bandana allowing him to communicate through human speech) has their own mini-plot in the series. It contains real development, emotional moments, and a resolution that directly impacts the other main characters. Nano’s evolution from the de facto maternal figure to an “ordinary” school girl was wholesome and more in-depth than I would have thought. The slow buildup into the climactic event and Nano’s smooth transition into the main circle was handled in a surprisingly natural way.

Sometimes, Nichijou will place the spotlight on the ensemble of side characters instead of the primary six. Despite none of them receiving any major focus or changes, the majority of them are just as memorable. One of Nichijou‘s greatest strengths come from the creative character designs and visual quirks associated with them. The eternally confused teacher Izumi Sakurai is always seen with sweat drops flying around her head. There’s also Nakanojo, who is easily recognizable by his gigantic mohawk. Of course, who could forget Misato Tachibana, the tsundere extraordinaire with an entire arsenal of military-grade weaponry at her disposal? I’m not sure how Nichijou managed to make such a large cast so loveable, but the massive amount of individualism on display is purely magnificent.

Nichijou, at its core, is a “cute girls doing cute things” anime, so there’s not much in the way of an actual storyline. For the most part, the series chronicles our two leading trios (Yuuko/Mio/Mai and Hakase/Nano/Sakamoto) as they get caught up in crazy hijinks.

With Nichijou being a pure comedy, the sketches are at the forefront. As the name (somewhat inaccurately) suggests, a lot of the sketches are based on relatable situations (e.g., having your secret vices uncovered, finishing final exams, or shopping for a bratty kid). As average as it sounds, the execution is anything but ordinary. Where else will you see somebody pull RPGs, miniguns, and cannons out of nowhere because they’re flustered? Or how about a girl causing a massive, city-sized explosion just by accidentally bumping into somebody? Or better yet, imagine a girl firing a planet-busting laser out of her mouth because of a dog bite.

The name of Nichijou‘s game is “absurdity.” It takes typical , boring situations and cranks the silliness up to 11, many times without warning. Of course, Nichijou also contains not-so-ordinary happenings, as well. The main source of the oddities comes from the Shinonome household, which makes sense considering the characters’ backgrounds.

The series also includes mini-segments that stray away from the main characters. The most common one, “Helvetica Standard,” contains most of the series’ absurdist humor. The art style is a lot rougher here, and the soundtrack teeters on the weird side. A lot of the jokes rely on some Japanese language comprehension and, at times, even more random slapstick gags than the main parts. Not every segment is a winner, but a few of them are gold (my favorite involving a girl’s secret crush). Another segment named “Love-Like” features short skits involving adorable and wholesome interactions between different people. A welcome break from the insanity, the “Love-Like” portions will melt your heart.

If I were to say that one of the most intense scenes in all of anime was two fifteen-year-old girls struggling to break a pumpkin, that’d be hard to believe, wouldn’t it? No, that’s just the magic of Nichijou. Kyoto Animation snapped on this show. For a series that’s almost a decade old, Nichijou holds some of the most dynamic, personality-filled animation choreography in anime history.

The art style is moe in nature, with the characters having a more simple, rounded, cutesy appearance. Although the designs are 1:1 with the original manga, they transfer over to animation exceptionally well. The simplicity and lack of detail allow the show’s most intense moments to be as crazy as possible without having to sacrifice anything. Furthermore, the control over the intricacies of the art style is masterful. Nichijou, at its status quo, is bright, with flat, somewhat muted colors. When chaos ensues, the heavily inked outlines,  darker colors, and overabundance of speed lines and paintbrush-styled effects take over. Mere words can’t describe the visual impact of this show.

Nichijou is a masterclass in sound design. The sound effects perfectly complement the frenetic animation and solidify the impact of the most intense scenes. The score, despite the crazy nature of the series, is almost cartoony in nature. There are a lot of live orchestral instruments (especially strings), and the compositions themselves are reminiscent of animated classics like Tom & Jerry and Looney Tunes. The silly and jovial soundtrack sounds almost ill-fitting to the events I described above, but somehow it just works.

I still can’t believe that Nichijou finally has an English dub after nine years. I’m even happier that the dub ended up being stupendous. Funimation assembled an all-star cast of Texas’s finest, featuring the wondrous talents of Morgan Garrett, Leah Clark, Jad Saxton, Kristen Mcguire, and many more. I can’t pick out a particular standout role because every voice actor brought their A-game and nailed their performances.

What impressed me more was the localization. Even though a lot of the humor in Nichijou is centered around the Japanese language, they somehow managed to make it work, leaving the simple ones intact and changing some of the more complex ones into something that fits contextually and remained funny. Not everything could be feasibly adapted, but for something as context-heavy as Nichijou, Funimation did a fantastic job adapting it.

Nichijou makes absolutely zero sense in the best way possible. An audiovisual masterpiece filled with top-shelf, absurdist comedy, it’s a one-of-a-kind show that still holds up after almost ten years. There’s not another anime like it, and won’t ever be another like it. Maybe.

How you can watch: The series is available on Blu-Ray (in both subbed only and dual audio versions) via Funimation.

Nichijou is streaming on: