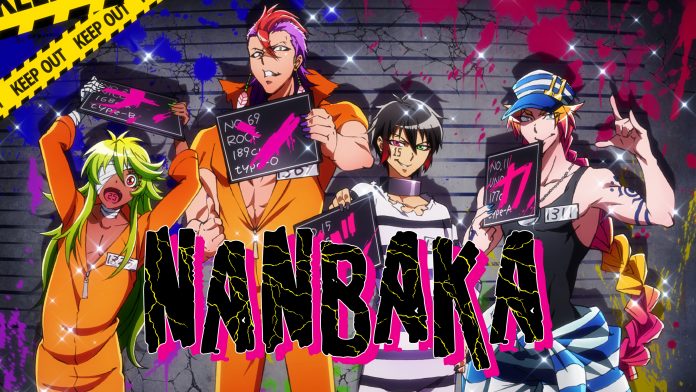 It’s tough working on an anime project that is geared towards humor. You have to worry if the jokes will connect with the audience and won’t turn into an awkward moment that’ll leaves viewers apathetic toward the project. It’s essential for a comedy anime to find its own footing and not look like a knock-off of other comedic anime. Sadly, that’s where I find NANBAKA landing itself. It tries to be a newer version of what made Gintama special and falls flat at being viewed as its own thing. While the dramatic moments are superior to the humorous ones, I leave feeling like it would have been better if it was a battle shōnen series.

In NANBAKA, we follow the story of Jyugo, who is an escape artist. Every prison he’s been thrown into couldn’t hold him and he’s taken to Nanba Prison (the most elite confines in the world). He, along with his cellmates Uno, Rock, and Nico, typically work together to create an unstoppable team that scares many police officers throughout the world. Thankfully the prison guard responsible for these four (Hajime) can keep these trouble makers in their cell and keep him out of the warden’s doghouse. We learn that Jyugo is trying to escape because he’s bored, but would also like to know who put these mysterious shackles on his wrists, ankles, and neck. As we dive more in-depth into Nanba Prison, we find out that there might be a bit more corruption and darkness than we expected. So what do Jyugo and his cellmates learn as they spend more time at the facility?

The biggest issue I had when completing the first part of NANBAKA that I couldn’t tell what tone it wanted to set. At first, it has a  happy go lucky charm that favors the side of comedy. We see the four prisoners commit many jokes and slap-happy moments that you’d get in a typical anime. It might have fallen flat with me, but there’s merit in trying to make a prison escape anime comedic. Funny guards, eccentric prisoners, and a spicy one-sided love affair between the warden and Hajime  which leads to many misunderstandings  that all had their moments. They are all cliched, but it works on a fundamental level. NANBAKA would then make dramatic left-hand turns of a more severe nature that I found fascinating. I was curious about the tragic backstory of a prison inmate Tsukumo, who was kidnapped by a Hollywood director. Or when we found out about the purpose that Jyugo has in finding out who put the shackles on him. But considering that this anime is a humor-themed, these moments felt out of place.

My warden can't possibly be this cute!! (via NANBAKA) pic.twitter.com/sUT2i4v54w

It’s as if the writer for NANBAKA saw how famous and beloved Gintama is, and tried their hand at making a duplicate. Gintama is such an impactful project, due to how genuinely funny the series is, and how natural the more serious arcs are. They take fans on a wild emotional ride that cements Gintama as one of the best franchises to come out of Japan. NANBAKA feels like an off-brand copycat, which doesn’t sit well with me. During NANBAKA’s New Year Festival arc fans are subject to a cliffhanger where we are led to believe that inmates are being experimented on at the prison. Plus, we get to see a ton of emotion from Jyugo. However, instead of seeing that issue resolved, NANBAKA takes us to a flashback story (which was interesting, interesting, in the series defense). But the series became self-aware of this fact and poked fun at itself for teasing the viewers, much like what you’ll see in Gintama.

A lot of the jokes were played out in series that I’ve already seen. I wasn’t expecting NANBAKA to create an original joke, but giving fans gags that you’d find in any comedy anime doesn’t do it justice. Nico being an otaku and wanting to recite famous lines is something that I hear in many comedy anime. And while the censorship within the series was cute, it distracted me more. Usually, bleeps make things funnier, but that wasn’t the case. And while I enjoyed the one-sided love affair between the Momoko and Hajime, it’s something I’ve already seen before. Sure, I enjoyed that everyone (including Hajime) fears the warden due to her intimidating presence. And indeed fell for her when they heard her “cutesy voice.” But this trope is easily found in any series, and it wasn’t spectacular. And the list of gags goes on and on.

I need them ALL #nanbaka pic.twitter.com/jXIHIFj3vc

And what’s even more puzzling is how intense and riveting the serious moments were. I find the lore of NANBAKA fascinating and it should have focused on that aspect instead of trying to make me laugh. The main plot is that someone is experimenting on convicts, bringing up the ethical question, “should we care?” You’d be hard pressed to find many who would plead the case for prisoners, considering they are people who defied the laws of society. However, each human deserves a fundamental right not to be tampered with, and there’s an organization or singular person who wants to use prisoners as lab rats. I find this exhilarating and wished for NANBAKA to ditch their comedic tone (looking like a Gintama rip-off), instead of playing up what Deadman Wonderland became. Due to how NANBAKA was much more battle-shōnen than Deadman Wonderland, it’d quickly become more memorable in its own right.

The animation wasn’t anything that blew me away but I enjoyed the choices the studio decided to make. I liked the sparkles that would float in the scene, adding a bit of levity. When the action did pick up during the New Year’s Festival arc, the animation took a dramatic turn for the better. The fight between Jyugo and Musashi was especially delightful. And I enjoyed many of the character designs when it came to their hair (Jyugo, Uno, Samon).

As far as the English dub is concerned, I felt somewhat mixed. Some performances felt stiff while others took the reigns and delivered remarkable performances. Daman Mills as Jyugo was everything I’d want and took my breath away with some of the more dramatic moments. Marissa Lenti as warden Momoko Hyakushiki was also a great casting choice, as she was able to nail the strong, stern voice as well as the cutesy tone. Other notable performances included Ian Sinclair (Hajime), J. Michael Tatum (Kiji Mitsuba), and Brandon McGinnis (Samon Gokuu). I was shocked at how underwhelming Justin Briner was as Nico (considering how he usually blows me away in other roles). Nico just didn’t sit well with me. And it wasn’t just Briner, as there were a few other actors who seemed off, such as Sam Biggs (Tsukumo), Elijah Muller (Trois), and Howard Wang (Hitoshi Sugoroku) which caught me off guard.

Ready to escape from prison?! I sure as hell am! The English Dub premiere of #NANBAKA is live! @FUNimation https://t.co/TufAE5ha7J pic.twitter.com/l1vFZST7pv

The news is out! VERY excited to announce that I'm Assistant ADR Director for #NANBAKA! Thanks @Aaron__Dismuke & @FUNimation for having me! https://t.co/jwhUK65ymK

FUNimation gave NANBAKA Part One a bare-bones release and only trailers were included with the extras. It came in a standard Blu-ray case with a cardboard slipcover. I’m a little surprised, considering Daman Mills cosplayed as Jyugo before. So I would have thought that FUNimation would have had a cool little video of the actor in his costume having fun with the crew who worked on the project.

I leave the first half of NANBAKA feeling confused more than anything. The series felt like it has an identity crisis. Some of the humor was fine, but it felt like it was trying to copy what made Gintama so successful instead of trying to stand on its own. Oddly enough, I found myself enjoying the more serious moments, and feel like NANBAKA would have been better suited as a battle-shōnen series. Regardless, it isn’t terrible and I think fans might want to watch this series before buying it. Here’s hoping the second half will pick up the slack later. At least the opening for the first part was great to listen to!

Pros: Interesting lore that will leave an impression with viewers; the serious moments were fun to watch; the action in the series; Daman Mills’ performance; the opening song.

Cons: Comedic moments felt like a Gintama rip-off; wished the anime was more battle focused; some performances felt stiff or off; no extras included.