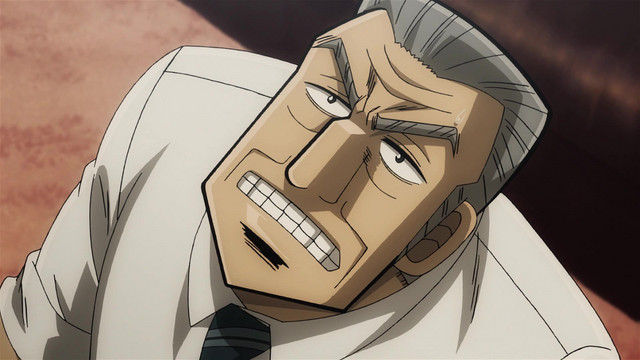 I’m a fan of a series diving into side stories or past stories to help build the lore of a previous series’ world. Mr. Tonegawa: Middle Management Blues is a new tale involving a primary antagonist from the anime series Kaiji, and we follow the everyday life of Mr. Tonegawa. And while I still have yet to watch Kaiji, I found myself instantly falling in love with this series cast of characters. Learning how many obstacles have been created and how the Teiai Group has a hold on everything was a lot more fun than I anticipated. While I wish that this series had the same tone that Kaiji allegedly has, I found it to be a great, relaxing anime. But I wonder how those who have experienced Kaiji feel, given this series’ different tone.

Usually, I’d start this paragraph by giving readers a synopsis of the series, but I think the narration by David Wald does it better. “Yukio Tonegawa. Second in command at the mega-corporation Teiai Group. A sharp man who rose to be the right-hand of President Hyōdō. A monster who is in control of both the political and business worlds. This is an insignificant story buried in that fame and legend of a great man who unbeknownst to anyone, agonizes and suffers from the mental conflict of being a middle manager.” It’s during these 24 episodes that Tonegawa and his team think of a death game for President Hyōdō’s amusement, and what would happen to Kaiji during his series. If nothing else, this series proves that you can make an enjoyable anime series about anything.

I think a lot of references and foreshadowing were lost on my end, simply because of my lack of knowledge of the previous series. But I was able to get some information from my brother, which helped a lot. Mr. Tonegawa: Middle Management Blues does a great job of putting the pieces together and showing the path for what Kaiji has to face down the line. Mr. Tonegawa’s group comes up with a restricted rock-paper-scissors card game and plan the setting where the game would take place (a yacht called the Espoir). In fact, throughout the series we see nearly everything that Kaiji will have to overcome (the narration informs viewers who aren’t familiar). I found it fascinating how the credit for creating the restricted rock-paper-scissor game was given to a simple black suit member (part of Mr. Tonegawa’s team named Saemon). I asked if that member played an important role later on the story (and Kaiji’s), but was told that he did not. In essence, a lot of what goes on in this series is insignificant (as the synopsis suggests).

I would’ve liked it if this series kept the serious tone of Kaiji. I wasn’t into the villains having a silly side or being turned into a joke (President Hyōdō being a prime example). However, I began to feel more connected to Tonegawa despite the side he’s on. I agonized with him when he thought he wasn’t getting enough support from his black suit team (knowing that pain all too well in group projects). And being able to find the right thing to say to his boss is something that many employees worry about daily. It’s rather comical how the series, in essence, creates empathy toward a villain.

Most of the series is episodic, with different tasks falling on Mr. Tonegawa and his team. He has to come up with amusement for President Hyōdō, and also accompanies him during big outings (such as when the President buys a new racehorse). Plus, we get to see how the team handles a female black suit in the workplace, which had to be embarrassing for a company to admit. And viewers get to learn how to successfully build a Twitter following. Although this series shows more of the humor side, it adds some quality topics that come up for businesses, and I didn’t expect that to happen at all.

I think the biggest issue that plagues this series is that none of the characters jump out at you. They are all overshadowed by David Wald’s narration, which is nothing short of fantastic. He was funny, and used many different voices/cadences that bring the series to life. But he isn’t an actual character in the show. It isn’t called David Wald: Middle Management Blues, after all. So Wald takes much of the spotlight away from the main cast, which isn’t any fault of his. But is that the best thing for the show? I  am curious about how other fans feel. The series was well-received when it debuted in Japan, so I don’t think it had a Hunter x Hunter narration issue.

Things are getting a little heated in the booth with David Wald! 🔥🎤

Watch him dub as the narrator from the DUBCAST edition of Mr. Tonegawa Middle Management Blues.

While Wald gets the top honor for this series cast, I still found myself enjoying the English voices in the series. I’m not as familiar with David Harbold (Yukio Tonegawa), but I think his voice is a perfect match for Tonegawa. He has the energy and grit that I expect for the character, and I hope to hear him in more series. But overall, I found the cast for Mr. Tonegawa: Middle Management Blues to be solid. It didn’t feel like there was a weak cast member and everyone did a great job (especially since it was a DUBCAST series on HIDIVE).

Did my last V.O. as the voice of Mr. Tonegawa in "Mr. Tonegawa: Middle Management Blues" today. *S*I*G*H* 24 episodes– now in the can. I will miss all of those crazy Black Suits, but who knows? Maybe there will be a Season 2!!! One can only hope… Until then, Sayōnara, baby!

Mr. Tonegawa: Middle Management Blues comes in the standard Blu-ray case that Sentai Filmworks usually distributes to the public. However, for whatever reason, the first two discs took a considerable amount of effort to get out the case, and I was nervous that I might break the discs. I had to be extra careful when getting them out. Hopefully, others didn’t have the same issue. And the release didn’t come with many extras. It came with a clean opening and closing song sequence, and that was it.

I’d be remiss if I didn’t talk about how much I enjoyed the opening of this series. It’s easily one of the best I’ve heard in a long time. It’s right next to Demon Slayer’s opening (as far as openings I’ve listened to recently). It’s a catchy tune with a beautiful pace that fits the tone of the series. It was enhanced by Wald’s narration, and once his monologue ends the music picks up, creating a sensation I love about anime (a little narration during an opening or closing before hitting the music in full). I cannot state this enough; the opening jingle is terrific.

I hope this lays the groundwork for Sentai Filmworks to acquire and dub the Kaiji anime, with this series getting that treatment. Mr. Tonegawa: Middle Management Blues does a wonderful job of painting a picture and laying the groundwork for what is to happen later on. I’d be even more favorable to this particular series if it wasn’t so humorous. But I enjoyed the world that Teiai controls, and found myself entertained. Of course, much of that has to do with the beautiful narration of David Wald and of course the great the opening jingle. I’d recommend checking this series out. If you are on the fence, it might spark your interest in checking out Kaiji in the future.

we find the dub and sub of this show equally entertaining

Pros: Became a relaxing and fun series to binge; interesting to see the lore of Kaiji and easy to jump in if you haven’t seen Kaiji; funny characters that you could become attached too; David Wald’s narration; the opening song.

Cons: The narrator was the best character making that more noticeable than the actual characters; the series was more humorous than Kaiji; had difficulties getting the discs out of the Blu-ray case.