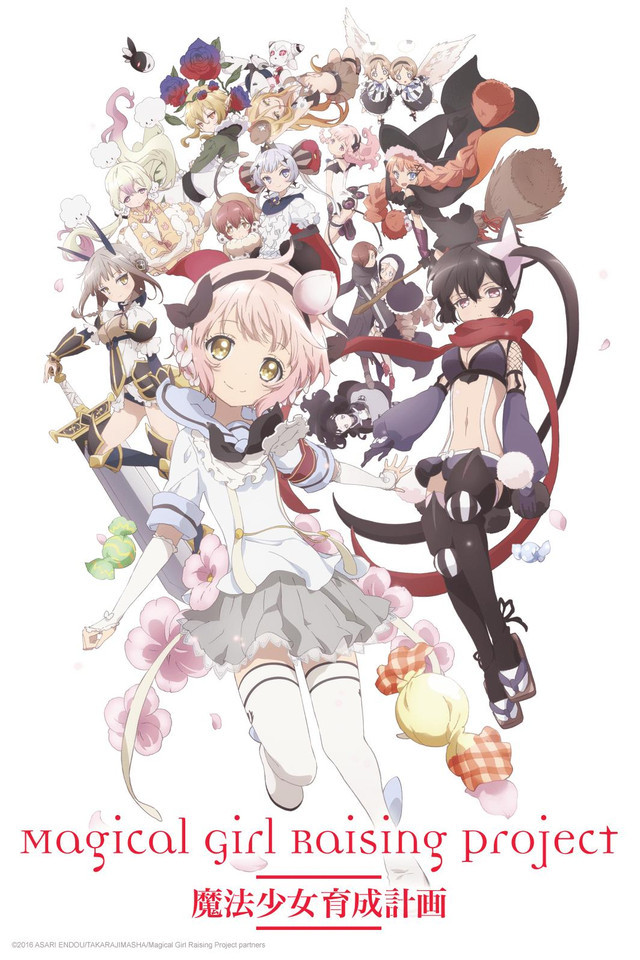 The dark magical girl story is still as popular as ever. Madoka Magica pioneered the dark cloud in a genre that is typically all smiles, and has given other magical girl series a challenge to do their own thing. Being a Madoka Magica clone isn’t necessarily a good thing, considering its shock value, and the intense storyline has been done before. Magical Girl Raising Project tries to be unique, but I found myself thinking about how played out the setting is. That isn’t to say the series did anything wrong. But in a genre littered with dark magical girl series, I’m not sure if Magical Girl Raising Project did enough to be remembered more for the exciting things it did than the genre itself.

In this series, we follow Koyuki Himekawa, who has a discussion with her friends about magical girl sightings in her city. The group recalls a popular mobile game where the app says players have the chance to be a magical girl (whatever that means). Koyuki downloads and plays the game, and to her surprise, a mysterious character named Fav appears in real-life, giving Koyuki the ability to be a magical girl. Dumbfounded, Koyuki uses her powers to help people in her city and meets the 15 other magical girls who vary in all types of looks and abilities. The goal that Fav has set forth is for all of the magical girls to do good deeds and achieve magical candies (much like the mobile game). However, Fav informs the group that the city they are located in cannot support all of the magical girls and the group of 16 will have to be halved. The girl with the least amount of candy has to forgo her magical powers and return to being human. Sadly, this is where things begin to get grim because once you lose your magical powers, you end up dying.

Slowly the girls begin to realize (thanks to some detective work) that they’ll die if they lose their powers. And all sorts of factions are built to avoid that outcome. The girls start to scheme and fight each other for the magical candies and to eliminate the competition. As the series progresses, it becomes more and more of a blood bath as the magical girls begin to whittle down. Koyuki later finds out that this was all set up by Fav and the magical girl Cranberry, since they’ve found previous selection processes annoying. The two plot to play this death game and see who qualifies as a true magical girl to help take on adversaries of the world of magic. Koyuki, traumatized by all the death and betrayal, decides that she doesn’t want to help Fav, and her and Ripple end up killing the magical creature. The two then begin to train to resist any kind of retaliation from the world of magic, as they are the last two standing from this magical girl raising project.

As stated before, all dark magical girl series have to do a lot to shake off the Madoka Magica rip-off label that inherently comes to mind. I think Magical Girl Raising Project does enough to be viewed as its own thing, with the character designs, as well as bringing in a plethora of individual girls, all with unique quirks. We have some deranged characters like Calamity Mary and Cranberry, who want to see who’s the strongest and deadliest. Instead of helping, they are only in it for themselves and with go to psychotic levels to get what they want. I found these two fascinating, because it seemed like they weren’t in the right series. They were scary to their counterparts, and they were a grim reminder that giving power to anyone isn’t always the best idea. Cranberry struck fear into any magical girl she came across, and Calamity Mary killed dozens of innocent bystanders to fight Ripple. And I still haven’t mentioned Swim Swim, who might have been the most ruthless as she betrayed her leader (Ruler), and killed her ally Tama without hesitating. Swim Swim even had the largest body count despite her young age and was a perfect candidate to be the last hurdle for our female leads in Koyuki (Snow White) and Ripple.

But there were positive characters as well, such as Sister Nana, Snow White (obviously), and Top Speed. They could be viewed as a throwback to the magical girls that fans are accustomed to seeing before the dark fantasy cloud took over. I found their interactions enjoyable. When Sister Nana becomes so thrilled that Winter Prism becomes a magical girl, you can’t help but feel the love between the two. And Top Speed was just as precious as she was the guiding light for a miserable Ripple and became her most significant motivator for winning this death game. These characters had their dark moments, but adding the little light that they exuded naturally created a delicate balance between everyone.

I think one thing that differentiates Magical Girl Raising Project from other series is how they had a boy be a magical girl. I thought it was an interesting choice, and I’m sure other male viewers have wondered: why can’t I be a magical girl? La Pucelle answers that question and brings to light the concept of gender identity, considering he would change genders when he transformed. Sota certainly shows the stigma male fans face when liking magical girl properties and the lengths some would go to hide that. I can sympathize with that. When I was younger, it wasn’t a “cool” thing for a boy to like magical girl shows. So it added a real element to this series that I think many would enjoy discussing it.

To its credit, I thought the emotional roller coaster the characters are on was compelling. When Top Speed dies after we find out she was pregnant it’s one of the saddest things you could see. But Sister Nana hanging herself after Winter Prism died was equally disturbing and gives me flashbacks to the popular light novel game Doki Doki Literature Club. The bleak outlook doesn’t have to be a long, drawn-out story where nothing works. The quickness of the deaths of characters creates a depressing mood, and I think others might feel similarly. Life is short, and seeing how characters died so quickly, gave me a fast realization of how accurate this statement is. It was sad, and Magical Girl Raising Project hits emotions I wasn’t expecting.

The question of what makes someone a magical girl was also a driving theme. It’s a question that was asked a lot in this series, and I don’t think it’s something anyone can answer. We don’t know what makes someone a magical girl or how anyone should live out their lives. We have the general belief that magical girls should be like Sister Nana, Snow White, and Top Speed; always cheerful and doing what they can to help others. But there are other magical girls like Cranberry and Calamity Mary who did whatever they pleased to get what they wanted. Both had homicidal tendencies, which isn’t something I’d feel a magical should be. Both ideologies were acknowledged by the world of magic, thus creating a grey area for what the interpretation of a magical girl is. It creates a beautiful talking point for this series.

But the aspect I found to be fundamental in creating a more well-received magical girl series is the magical creature that causes the mischief in the first place. No being will ever top Kyuubi. Kyuubi was the perfect mix of cute, unsuspecting, creepy, and evil. It gave me goosebumps seeing how evil that creature was. And I think Fav did just as well of a job as any. The tone the English voice gave the character fit perfectly to keep him sounding happy and positive. But it was creepy that Fav had that same tone when explaining the darker parts of this raising project. The simple design of Fav with the black and white coloring (along with his red eyes) created a monster, both cute and fearful.

However, despite all of the highs, the action in this series didn’t reach the same level. It felt stiff and didn’t wow me as I expected. I wish the series copied Madoka Magica’s fantastic action to mesh with the emotional moments that tugged at the heartstrings. I was hoping that when Calamity Mary lay waste on innocent civilians that things would pick up, especially when Ripple came to confront her. But nothing looked spectacular, which I think is a considerable detriment to Magical Girl Raising Project.

Nor did the character designs pop with me the way I thought they would. The art style wasn’t to my liking, but that’s more of a personal preference than anything. It didn’t look like the details were a huge concern for the studio, and the characters looked bland when in real-life. I found the sprites in the mobile game looked better and cuter than they did as actual people. I thought Calamity Mary and La Pucelle looked the best, but no one wowed me as they became real.

The English cast was phenomenal, and ADR Director Jad Saxton picked some talented ladies for this series. Madeleine Morris should be praised for her performance as Fav (as stated earlier), as she had the best tone to imply happiness, but also gave fans the creeps when she was talking about death. And the performance of Stephanie Garrett stood out.  I loved the cadence of Magicaloid 44 when she wasn’t in her robot form. Garrett was able to match how I think a “street smart” girl should sound. Despite that, I give the nod to Lindsey Siedel for her performance as Top Speed. The character’s hamminess allowed Siedel to spread her wings and sound exactly like a young newlywed who was having a baby. She was cute, endearing, and funny, making Top Speed one of the most versatile characters I’ve seen. But I  enjoyed the entire cast, and other notable performances came from Megan Shipman, Katelyn Barr, and Kristen McGuire.

I liked Magical Girl Raising Project; it did enough for me to feel like it was its own thing. Yes, it copies a lot of elements from its predecessors. But this story is one of the only ones where I want more content in the future. What will Snow White and Ripple do now that they have survived and have mostly disregarded the world of magic’s calls? And while the action and art style wasn’t my thing, the brutality and quickness of death that came in this series has a tremendous amount of impact. The English cast only strengthens the enjoyment of this series, creating a solid series that I hope more people will enjoy. But regarding what the future holds for Snow White and Ripple, I’d suggest looking into the light novels, which I might do myself.

Pros: Spurs some interesting discussions involving gender identity and what it means to be a magical girl; quick and truly sad deaths that are emotional; Fav was a great creature character; a great English cast.

Cons: The action wasn’t as spectacular as I’d want; character designs didn’t wow me; wish the story would continue from where it leaves off.