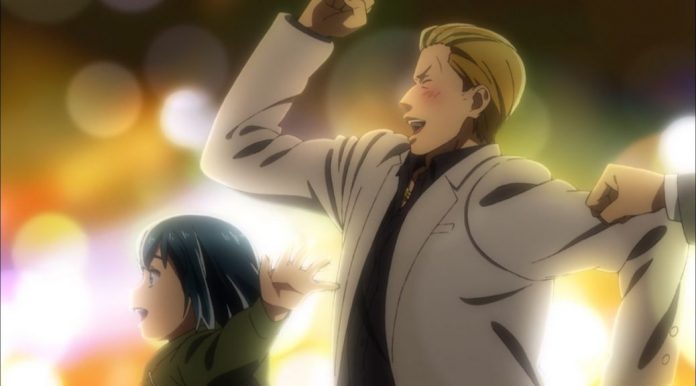 Hinamatsuri made some big waves amongst the hardcore seasonal anime crowd back in 2018. Everybody I’ve seen mention the series had nothing but critical acclaim accompany it. After seeing Crunchyroll nominate it for the highest honor of Anime of the Year at the 2019 Anime Awards, I had a feeling that I missed a gem. I’m thrilled to have been given the chance to review this series because it’s oh so good.

Yoshifumi Nitta, a low-ranking yakuza member with a penchant for collecting vases, has his relatively peaceful days turned upside-down when a weird, emotionless thirteen-year-old telekinetic named Hina (literally) drops into his life. Gone is Nitta’s carefree life of money and debauchery, as now he has to deal with being a pseudo-parent to a superpowered brat.

Based on the little I heard of Hinamatsuri and the way this series starts, I expected a larger balance of action and comedy. It turns out; it was a lot less Mob Psycho 100 and a lot more The Disastrous Life of Saiki K. There’s nothing wrong with that at all, but I was a little disappointed that they didn’t take advantage of the absurdity and include a lot more crazy usage of the psychic powers. Even so, Hinamatsuri does the comedy thing close to perfectly. It’s rapid-fire with precision timing, and most of the time, it hits the mark on the bullseye. The detailed reaction faces and straight-man retorts are drop-dead hilarious and might have you pausing the anime to catch your breath.

Hinamatsuri is outlandish and slapstick at its core, but it does know when to take itself seriously. In between those moments, Hinamatsuri slowly builds one of its most prominent themes behind the scenes: the importance of “family” (in multiple senses of the word). While the “single guy adopting a random girl” plot thread tends to always lead into that sort of lesson, Hinamatsuri does it in a way that provides more depth than normal. The relationship between Nitta and Hina, especially, has this unique, tiered approach to it, playing with this balancing act of Nitta’s responsibility to his yakuza family that doesn’t need him, and this lost little girl that would cause problems without him. Hinamatsuri subverted my expectations by pulling off this difficult maneuver instead of having the “bad boy” call it quits and becoming a full-time father, and it has my respect.

Outside of our main characters, the concept of “family” is ever-present within the entire series. The whole shopping district has this interconnected feel to it, and all the shop owners (namely bar owner Utako) look out for each other and everybody they know, regardless of affiliation. On a sadder front, there’s a small homeless camp at the forefront of the secondary plotlines. Trapped in the same circumstances, they do what they can to keep each other alive, even when times feel futile. All of this culminates into one of the most central lessons of Hinamatsuri: “family” is all about those you hold dearest, regardless of blood relations or loyalty obligations.

Unfortunately, it does take a little bit of time for it to get to a consistent state of quality. The beginning of the series, while full of some good funny moments and trope-breakers, feels like it struggles to gain solid footing.  After about episode three, though, Hinamatsuri remains constantly fantastic until the last episode

The prime source of Hinamatsuri’s charm is found in its characters. There’s an eclectic mix of folks from a wide variety of different walks of life and personalities, adding to the series’s scatterbrained nature. On paper, a show full of telekinetics, yakuza, and hobos almost sounds like a disaster waiting to happen. Somehow, Hinamatsuri makes it work perfectly.

Our two central characters, Hina and Nitta, work better together than when they’re alone. Alone, Nitta’s just the one chill guy in the yakuza that’s just trying to get a date. Hina’s just the emotionless girl with no idea how society works. Together, they’re a one-two combo of a fantastic comedy duo and a wholesome family. I wish they had more defining moments by themselves, but they’re still great characters, nonetheless.

The most charming characters to me were Anzu and Hitomi. Anzu starts as the delinquent tomboy (which is a trope I do love) to one of the shiniest beacons of wholesomeness I’ve ever come across in the medium. It’s almost incredible how impossibly perfect Anzu becomes throughout the series (to the point where Nitta wishes that she dropped in his life instead of Hina). She’s hardworking, heartwarming, and compassionate, almost to a fault. You can’t help but root for her happiness.

Conversely, Hitomi is the apex of the other side of Hinamaturi’s coin. While Anzu delivers the feels, Hitomi’s outrageous story arc exemplifies just how silly this series can get. Despite being the straight-man character with the best reactions to the absurdity around her, she herself isn’t immune to the same brand of craziness. I mean, come on, who’s ever heard of a bartending, window-washing, construction-working, office lady/middle school student with a penthouse suite and connections to some of the biggest corporations in Japan?  Child labor law violations aside, the concept is so stupid that it comes around full circle and ends up being one of the best character stories I’ve ever witnessed.

One of my favorite things about Hinamatsuri is that it isn’t afraid to let its characters show vulnerability or struggle. While all of the main characters show this at one point, Anzu delivers the most significant source of this vulnerability. Anzu’s arc provides heartfelt lessons on how to make the most of what you have and evolves into a great experience on how to express gratitude even when you feel you don’t deserve the nice things in life. I’m not ashamed to admit that I teared up during a few of her scenes.

Not often will I see an anime studio put so much detail and subtlety into body language, especially in a comedy anime. As soon as I realized that Hinamatsuri was animated by Feel (My Teen Romantic Comedy SNAFU TOO!, Dagashi Kashi), everything made sense. Feel tends to focus a lot on expressing a character’s personality through body language, and Hinamatsuri is no exception. Every person’s movements look natural and exude the perfect amount of character. Everything from Hina’s somewhat stilted mannerisms to Hitomi’s constant tenseness can be spotted from a mile away, and it made me appreciate the work put into adapting this series even more.

As for the animation quality and art style, they’re both very appealing. I love the overall design sense of Hinamatsuri. It’s not too moe, but it’s not too realistic, either. I’d say it’s the perfect amount of “ordinary.” While all of the characters look borderline stereotypical, the series balances itself out with the juxtaposition of the character’s subversive personalities. Of course, the ridiculous, exaggerated reaction faces have a lot to do with the added charm. The rare moments of intensity are the peak of Hinamatsuri’s visuals. The opening street brawl has some of the smoothest action, flow, and choreography I’ve ever seen in an anime. Even the moments where the characters don’t move that much look great.  Simple moments, such as Anzu writhing in pain after her loss in the “rock paper scissors” game, are a lot more detailed than the average anime. My only complaint is that there were a little bit too many scenes showing the younger girls naked or bathing. The scenes themselves aren’t sexual in nature, which I do appreciate, but even so, they felt a tad bit excessive.

Probably the second most crucial aspect of a comedy anime, behind the jokes themselves, is the sound design. Delivery is everything and can make or break a joke. Thankfully, the voice acting in Hinamatsuri is undoubtedly superb in both languages. My favorite quirk this series has is the fact that the characters sometimes yell “owie!” when hurt, no matter their age or build. It’s such a silly yet unique dialogue choice that I haven’t seen before, and it gives the series its own identity. Add in the great sound effects, engineering, and fantastic scriptwriting, and you have a recipe for comedic gold.

Probably the most standout roles for me in this series were the main three teenage girls. Brina Palencia’s Hina matched the deadpan vibe of the original Japanese version beat for beat, and I thoroughly enjoyed it. Tabitha Ray flawlessly portrayed every aspect of Hitomi, from her chronic nervousness to her inability to process her hectic life. Perhaps my favorite role in the dub was AmaLee (famous YouTube singer LeenadLie) as best girl Anzu. As somebody who previously only knew her for her singing chops, I was wildly impressed by her acting chops as well. Lee gave a perfect, tear-jerking performance for such a multifaceted character. The rest of the cast is also top tier. Jarrod Greene’s Nitta also deserves props, as it’s a perfect match for Nitta’s design and background.

Hinamatsuri is a superbly animated comedy series that never fails to tickle the funny bone and tug at the heartstrings. It may not be the most engaging or groundbreaking series, but it does what it does well enough that it ends up still being wildly entertaining. Fans of comedy anime should not miss out on this hidden gem. Once you make it past the first couple episodes, you’re in for a real treat.

How you can watch Hinamatsuri:

The series is available on Blu-ray via Funimation & Crunchyroll

Hinamatsuri is streaming on