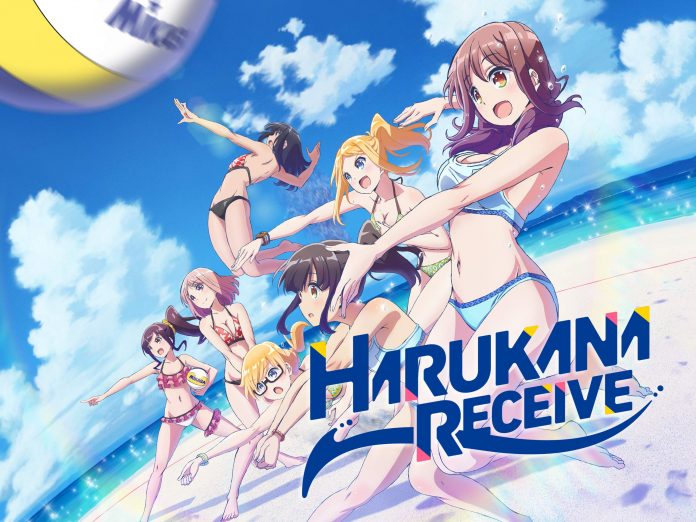 Being a sports fan, I always hope for more sports anime to become a reality. The knock is that sports anime do not translate well in the U.S. Just like with the Toonami audience, after the Prince of Tennis aired on the block, the support for this genre has been lackluster. But that doesn’t mean Japan will stop, as they hope that new sports series will capture the type of fanfare that actual sports receive. Enter Harukana Receive, a series that follows the game of beach volleyball. But the question is, does it provide the perfect ace for fans or not?

The story takes place in Okinawa, where Haruka Ozora moves to live with her grandmother. At the airport, Haruka reunites with her cousin Kanata Higa, who at first seems somewhat distant. We learn early on that Kanata isn’t herself, losing her confidence and drive to play beach volleyball with her old partner Narumi Tōi. Narumi ends up finding a new partner and has reached the rank of the best random in the district while Kanata stays on the sidelines. With a push from Haruka to play a quick game with Narumi, Kanata’s drive is awakened once more, and the two form a pair to play the sport. Kanata and Haruka continue to train with the help of Kanta’s old rivals, the Thomas sisters (Claire and Emily), and the four go to tournaments to get better and better. Thanks to Haruka, Kanata is once again acting like she used to when she played, and the four leave it all on the sand as they face off to see which pair will go to nationals. In the end, Haruka and Kanata defeat the Thomas sisters and get ready to go to nationals, where they will face off against Narumi for the top spot in the country.

As far as stories go, this one is pretty simple. Kanata lost her mojo after suffering a terrible defeat, due to her height. Her spikes kept getting blocked over and over and she felt she was holding Narumi back, even though Narumi thought that Kanata was the better player of the two. Despite the fact that Kanata got Narumi into volleyball, Narumi continues to play on, with the hopes that Kanata will also continue to play the sport. Thankfully, Haruka’s youthful exuberance is the spark Kanata needed to believe in her abilities. And the rest of the series follows the two girls as they climb the ranks. A very straightforward story, but one that I prefer to a more convoluted plot.

Many touching moments felt real. Haruka and Kanata’s support of one another is the driving force of this anime. However, when Kanata breaks out of her funk to play beach volleyball again it felt much too fast after the trauma of her height complex, and made her return to glory less impactful. It was great seeing Haruka build up Kanata (as well as the Thomas sisters and their mother). But considering Kanata’s feeling that she held Narumi back, and the fact that Narumi continued to play without Kanata it was a perfect storm to wreck a player emotionally. As viewers will learn in this anime, pairs in volleyball become as close as best friends and even lovers. So with all that Narumi did to continue her career I thought it would hurt Kanata a lot more than it seemed. But it did give the series a lot of emotional highs once Kanata broke out of her shell and returned to glory once more.

Volleyball has always been a sleeper sport for me. I find both indoor and outdoor volleyball exciting to watch (especially during the Olympics). So I believed that Harukana Receive would have a lot of exciting moments, especially since a series like Haikyuu portrays the emotional highs an actual game can provide. But sadly, that wasn’t the case here, which made it challenging for the series to hold my attention. The animation for the matches themselves wasn’t all that impressive. Instead of making the action on the sand more compelling, the series put more emphasis on the posing the girls did as they were serving, blocking, or diving. I think for Harukana Receive to gain more traction with both sports fans and anime fans, the game action had to grab viewers, which it didn’t.

Plus, I think this series has a difficult task to handle fanservice. I think it’s unfair to label this show simply a vehicle for everyone to ogle the characters. After all, beach volleyball is a taxing sport on the body and mind, and I’m amazed at the athletes that can play it at a pro-level. But the series falls into the trap of adding fanservice moments that littered the series, such as Kanata commenting about Haruka’s butt, or when Claire would mention her swimsuit bottoms that weren’t tight enough to play in. I wish these moments weren’t as prevalent in the early episodes; I don’t think a ton of it was needed. The girls will be playing in swimsuits, so there’s going to be fanservice. Camera angles will focus on character’s butts, especially during games when signs are being sent. But I think there were plenty of moments where fanservice elements could’ve been eliminated and allow the wardrobes of the series to speak for itself.

After all, the character designs in Harukana Receive popped to my liking. I thought each character spoke wonderfully, and it was a true strength of the series. Since I didn’t think the volleyball action was enough to keep attention, this series needed to find a hook elsewhere, and I thought that the appearance of every character was designed to hold viewers’ interest. The Thomas sisters and their blonde hair were vibrant. Haruka and Kanata’s eyes (primarily when focused) looked spectacular. And throughout the series, every character had an aspect or two that I loved, which was excellent in this cutesy show.

I was surprised at how much I enjoyed the music. So while the action in the games wasn’t the most compelling, the music helped immensely. I thought it did a great job enlivening the scenes. But I found myself moving my head to the beats and felt that I was fine not having an episode play and simply listening to the menu music. Very well done for the series.

I thought the English cast was on their game as there wasn’t a single weak actor in this series. You know what you are getting with voice acting veterans like Tia Ballard (Haruko), Sarah Wiendheft (Kanata), Amber Lee Conners (Claire), and Bryn April (Emily). And while I found Akari Ōshiro to be an annoying character, Lindsey Siedel did a great job providing a fun and chipper voice to the energetic young lady. I continued to enjoy Jamie Marchi’s performance as Marissa Thomas; as she nailed the soft-spoken mother tone. She sounded as if she was the actual mother of the Thomas sisters, and that stuck with me as I think the support Marissa gives as a parent is so valuable in sports for kids.

Interestingly enough, Harukana Receive provides a few extras for fans who purchase the series. It comes with two art cards showcasing both Haruko and Kanata, which are both well-drawn. The series also has web trailers, textless intros, outros, and other trailers for fans to view. I was plenty happy for some more art cards but wished that there were more exciting video extras included.

Harukana Receive lands in an awkward place for me. It does a lot of things well, such as great character designs, a surprisingly catchy soundtrack, and a robust English cast. But the essential part for a viewer like me are the games themselves. And those weren’t impactful enough for me to give this series a high score. If you aren’t a sports fan, then I can understand the interest in this series, since it falls more into the “cute girls doing cute things” moniker than the sports genre. But I needed more compelling matches to get the juices flowing, and Harukana Receive was just short of being great for me.

Cons: Kanata breaking out of her funk felt too quick; the actual volleyball matches didn’t feel impactful; too few episodes for the story to breathe; fanservice in the earlier episodes wasn’t needed considering we’d be seeing the athletes in swimsuits.

Don’t forget to check out the Toonami Faithful Podcast