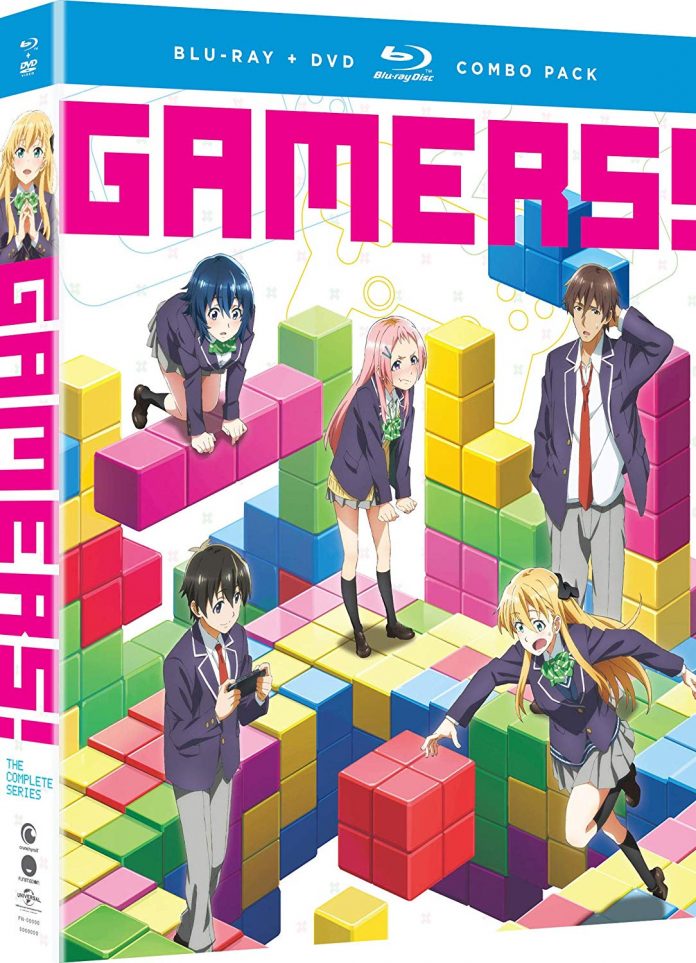 Sometimes you watch a series but don’t realize how much you like it. That’s what happened when I sat down to watch Gamers! for this review. Somehow I’d forgotten about the series and didn’t put too much stock in it, thinking it was another flash in the pan during its seasonal run. It was decent, but I didn’t fall as hard for the title as I have now. After watching the series from start to finish, I have a new appreciation for it I hope that another season can be made, because I found Gamers! to be one of the best romantic comedies anime has to offer since School Rumble.

The story follows Keito Amano, who is an avid gamer. He has no friends but finds comfort in playing video games, whether it’s on a console, PC, or mobile device . He’s approached by Karen Tendō, the most popular (and prettiest) girl in school. She is the president of the game club and wants to recruit our lead character. Amano visits the club and finds out that the members are all hardcore competitive players in their respective fields (FPS, Fighting Games, etc.). Amano isn’t interested in the hardcore style of gaming and declines to join. Tendō continues to try and recruit Amano but ends up falling in love with him as he defends the game club from another main character (Tasuku Uehara) who is dissing it. After that, there are many misunderstandings and hilarity ensues as Amano, Tendō, Uehara, Aguri (Uehara’s girlfriend), and Chiaki Hoshinomori end up in a crazy love pentagon throughout the series that never ceases to give you laughs.

For a series with a main story that runs for 11 episodes (and one bonus episode), I was surprised how captivating it was. Typically when viewers watch a romantic comedy anime, the big moment is when the hero declares his love for the heroine (or reverse) and they begin their relationship. Instead, the big reveal in Gamers! is Amano asking Tendō out in episode six (which was in itself a great episode). Having the typical climax come earlier gives Gamers! a brisker pace than most slice of life series. It makes the series pop, and it makes for a juicy reveal that hooks viewers in earlier than you’d expect. Since there isn’t any fighting (what you’d usually see in shōnen), it’s these types of moments that engages you and keeps you wanting more. So the moment, when Amano accidentally asks Tendō out (instead of becoming friends) was a climactic moment that veterans of the genre will love. And viewers are given another juicy reveal in episode eight, when Hoshinomori finds out that Amano (who she disliked IRL) happens to be her biggest fan and companion (in a mobile game that both she and Amano play religiously). It was a moment that sent me on an emotional roller coaster that I wasn’t expecting. It was reminiscent of how I felt in School Rumble when Harima found out that Tenma was in love with Karasuma and had to accept that reality. You feel devastated for Harima, and that’s exactly how I felt when Hoshinomori realizes who Amano is and blanks out for the rest of the night. It was these dramatic moments that gave Gamers! more emotion than I was expecting.

Even better, the humor was on point and portrayed how misunderstandings in relationships happen all the time. Poor Tendō misinterpreting what Amano meant throughout the series is a good example of that. When Amano visits Tendō’s classroom for the first time but states how he was only there to meet and talk with Hoshinomori was funny, considering she felt she locked out on Amano’s heart. And when they do decide to date, Tendō didn’t understand (due to Amano’s poor explanation) that Amano needed advice on how to reject someone for Hoshinomori’s sake, not his. The phone call causes Tendō to cry about how cruel the world is— her boyfriend forces her to teach him how to reject her, and after he makes a bold statement about their relationship, she pulls a one-eighty and blurts out “I love you.” The dynamic between Amano and Tendō was pure comedy.

But the misunderstandings don’t only occur between those two. Aguri, Uehara, and Hoshinomori all fall victim to the same fate, with false love declarations, assumptions of cheating, and every other type of relationship drama. Especially funny were the three inner monologues in episode six, concerning how to play Amano’s confession to Tendō. Both Uehara and Aguri believe the other one is cheating, and ask Tendō to spy on the other, resulting in Amano and Tendō getting closer. The couple ends up staring at each other with ridiculous faces and screaming (inside their heads) about the situation. Hoshinomori, on the other hand, thinks that Aguri is taking advantage of Amano, and is crying out for help by going to Tendō. Again, I can’t stress enough at how funny this series is, and episode six was the pinnacle of its humor.

Despite the relatable relationship humor that was ever-apparent, Gamers! also had tender moments that were cute to watch. When Amano and Tendō first held hands or went out on dates, it was fun watching the relationship grow as opposed to having this be the end of the series. It did a great job depicting that awkwardness of a new relationship. However, seeing the Uehara and Aguri was exceptional as well when we find out how Aguri fell in love with Uehara at the start. It was well before he was popular, and Aguri felt that Uehara was the nicest person in the world after he gave her a stuffed cat. After realizing who Aguri was Uehara’s heart began to flutter and he became smitten with her, changing his cold demeanor that we see earlier. That growth felt special, and I wish we could see the relationship continue in more episodes.

And yet, I think the most brilliant thing about Gamers! is that you aren’t sure who Amano should end up dating. The series had its own shipping war, setting the tone that you can’t go wrong with either Hoshinomori or Tendō. Gamers! goes so far as to have Uehara call Hoshinomori, saying that he picks her (for Amano) to create the same kind of tension fans experience in romantic slice of life series. You want Hoshinomori to find happiness with Amano after she finds out that he is her biggest fan of the games she creates and is his best companion in the mobile game they play. But that doesn’t mean I want Tendō to suffer (considering how much she does in the series) because she fell for Amano hard. She was moved by how he defended her and her club. Amano liked her not because she was the most beautiful girl in school, but for who she was as a person, which I don’t think has ever happened to Tendō. It’s touching, and I can’t fault those who want Amano to stay with her instead of Hoshinomori.

It’s hard for me to critique anything in Gamers! as it did so much right. It had characters you cared about, never-ending hilarious misunderstandings, and tender moments that tugged at your heart. I even got all the video game references (whether it be in the opening or in the show itself). Most, if not all of the references hit, giving you a complete package of what you want from Gamers!. I will say I wasn’t a fan of having episode four completely ignore the cliff hanger in episode three and then resolve it in episode five, but I was binge-watching the series, so it didn’t really bug me. I think the only problem I had was that the series was finished in 12 episodes. I need another season with these characters.

Which do you prefer, 'moe' games or games that focus on gameplay and story> Anime is Gamers! pic.twitter.com/zPhjhXCeHU

The English voice cast performed at a high level. I’d say Clifford Chapin is the most energetic performer, portraying Uehara’s confident/arrogant moments, as well as the freak outs he had throughout the series. Same can be said for Brittney Karbowski, who was the perfect choice as Tendo. Not only could she nail the “spazzing” that Tendō went through, but she imitated the awesome squeaks young kids make when they are embarrassed talking to the person they love. I especially loved the moments when Tendō would get possessive with Amano when Hoshinomori or Aguri would flirt with him. And it’s also hard not to mention the excellent performance of Jad Saxton who had to play a high school girl who is as perverted as an old man (Konoha). I couldn’t stop laughing. But there was never a weak link when watching Gamers! and I was impressed by the main cast all around.

My cast took the @Crunchyroll #gamers_anime Personality quiz & they're all getting characters besides who I cast them as.. #Betrayal

I can’t say enough about how much I enjoyed Gamers!. I haven’t seen a romantic comedy hit on everything it set to accomplish like this in a long time. It’s the best romantic comedy in anime (as of now) and I hope that other series can view this one as the gold standard. It had wonderful characters that I cherished. It had shipping wars in the series itself, which I thought was a stroke of genius. The hilarious and somewhat relatable moments involving misunderstandings in relationships hit the mark every time. And video game fans get a ton of references to games they are familiar with. The final episode sparks a great debate about some of the shadier things gaming companies do (DLC, loot boxes, etc.) and was thought-provoking in a funny yet straightforward way adding a nice bow to the series. There was even a decent balance of fanservice which I’m surprised I’m saying. Gamers! was a great anime, and I can see why it was promoted so much when it debuted on Crunchyroll. I highly recommend this series, especially if you could use a good laugh. It’s what I wanted, and I’m sure others will feel the same.

Cons: Wish there was another season; didn’t like that episode four completely ignored a cliff hanger for episode three; limited extras.