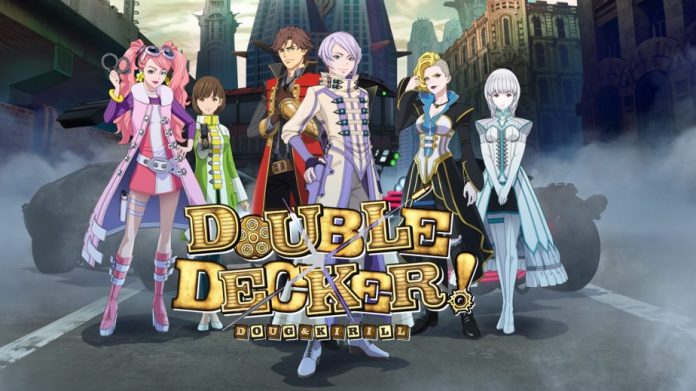 I always hope for more cop drama anime to be shared with the masses. It’s my favorite genre when I watch live-action television series from the U.S. So hearing about Double Decker! Doug & Kirill piqued my interest and was something I looked forward to seeing. Digging deeper, I was very excited when I heard that the same studio and people who worked on the cult classic Tiger and Bunny were at the helm. I honestly believed this series would be a smash hit. And then I watched the series, and I ended up feeling more mixed, which saddened me. I wanted this series to blow me away and prove that this genre deserves to be in more anime.

The series occurs in a city known as Lisvaletta, where the people live their daily lives. However, unbeknownst to the public, a lot of crime and illegal activity takes place in this city. The most dangerous one is a highly sought after drug called anthem, which can turn ordinary citizens into powerful monsters. There’s a special task force by the name of Seven-O that is tasked with getting the drug off the streets and keeping the public safe. Our story takes place following a young, energetic officer by the name of Kirill Vrubel, who wants to be a famous hero. During his quest for glory, he stumbles upon an anthem overdose case. It’s here he meets Douglas Billingham, a Seven-O detective, and the two work together to help stop the overdosing criminal and save the city. Kirill ends up getting transferred to Seven-O (since he looks like a woman) and is recommended by Doug. The two later become partners, or as their bosses explain, Double Deckers.

Viewers then watch as Doug and Kirill work different anthem beats and try to keep the masses safe from the dangerous drug. Since the drug can turn people into monsters or super-soldiers, it’s become prevalent, making it Seven-O’s job to stop anyone from marketing or using the drug. While you’d think this series would be more about one-off cases dealing with anthem, we find out how Esperanza has their hands in nearly every pie involving the drug. The series becomes a cat-and-mouse game, where Seven-O will try to thwart Esperanza’s plans and get the illegal drug off the street. But in the end, Double Decker takes the story of Kirill out of this world, adding a few twists and turns to show how much lore is jam-packed.

What made me feel mixed about Double Decker! Doug & Kirill was how much this series strayed away from the more typical storyline that I like with cop dramas. That normalcy was removed from the first episode when we see how people mutate when they overdose on anthem (creating an overdrive, as mentioned in the series). Still, some of the twists that were thrown in came out of left field and felt more like an overreaching plot point to use to try and hold the story together. Finding out how there’s another civilization on one of the planets’ suns called Nikai was such a stretch that even I rolled my eyes. And Kirill and his sibling both being refugees from that civilization felt shoehorned in simply as a ploy to keep viewers interested. I understand that this is being used more as a symbol for illegal aliens, other countries’ hidden agendas in the real world, and the turmoil these topics bring. But it’d been better to have Kirill and Milla come from another country rather than creating a space colony angle that didn’t fit with me.

The twists in this series didn’t make a lot of sense and were so ridiculous that I couldn’t believe it to be true. Such as the story with Milla. At first, Kirill desperately tries to find his long-lost sister after the two have been separated when Kirill was young. Then, out of the blue, the two run into each other (after Kirill nearly found her during a case he was working). It took the emotional appeal of the reunion away and made the storyline of the two finding each other seem less important. Then, to find out that Milla was a man all these years, cross-dressing to confuse their enemies felt like the kind of story young children make to cover up lies. I can understand outsiders being fooled, but Kirill too? That’s hard to believe, considering both were rather close before they drifted away.

Despite how ridiculous the cover story was (in the fact that it even fooled Kirill), I do like how the series handled the situation, considering how much anime typically provides cross-dressing characters as gag props in a series. And once everything came together, I understood the point of it. But I think it’d made more sense that Kirill knew that his brother was dressing up as his sister to keep people off the trail. But because Kirill was vital to the planet of Nikai, since his body produces anti-bodies for the world’s super-soldier program, the reasons Valery (Milla) hid his gender made sense (in a very convoluted way).

There were some aspects of the series that I did enjoy, mainly the comedy. Having Double Decker! Doug & Kirill be more of a buddy-cop comedy did scare me, due to how tough it is to make comedy work out. I found the little gags and silly moments to be very enjoyable. There were some easy laughable moments, such as bleeping out the curse words that came out of Deana’s mouth (I love the bleep effect so much). The narrator explaining everything in a comedic way (such as Doug being a jerk) was always a treat to hear. I also liked how Kirill’s new nickname at Seven-O was “Buzz-cut “even though his hairstyle isn’t a buzz-cut at all. And seeing his boss, Travis, push it on him was hilarious. And it was great hearing other members of the force call him that too. Then seeing Travis behave inappropriately at the workplace, along with the punishment he was given out, was the kind of justice that I found funny. Surprisingly, despite his less than favorable attitude, the moments he showed up helped keep my interest, because I wanted to see how he’d screw up being the boss. Like the narrator of the series said, Travis is an idiot, and he brought life to a gang of more stoic or typical characters.

Just like in Tiger and Bunny, the character designs were amazing and every character that showed up looked cool. I especially loved the design of both Doug and Max. Their hairstyles were huge wins for me; I thought they looked stylish and attractive. But the vibrant colors and themes given to each fit them nicely. Seeing Deana in more eye-catching colors of purple and pink fit her personality beautifully, which is a huge strength of the production crew. The superhero designs in Tiger and Bunny always wowed me, and that didn’t stop with Double Decker! Doug and Kirill.

And I was surprised at how much CG was used in this series, considering I didn’t think it was necessary. Unlike Tiger and Bunny, where the superheroes were wearing robotic type suits, in Double Decker! Doug and Kirill the uniform Seven-O wore didn’t resemble a similar style. They just looked like regular clothes in this world, so it caught me by surprise. I didn’t think the look was terrible, considering how well these individuals did with adding CG in Tiger and Bunny. I wasn’t expecting it.

I thought the English cast for Double Decker! Doug & Kirill were cast perfectly for the roles. Having Micah Solusod as Kirill was spot on since he is tremendously gifted in giving characters a wide range of emotions (and yelling a ton). And while Ian Sinclair had to be much more reserved as Doug, I felt the jerk vibe that Doug exuded was adequately captured in Sinclair’s performance. And not to be outdone, Barry Yandell’s rendition of Travis was monumental. Being able to nail a confident yet stupid tone isn’t easy, and his interpretation was what I’d want from that character. But the most significant nod has to go to Jamie Marchi, who must have had a field day getting to voice Deana, given all the swears she could drop plus her kick-butt attitude. It was a treat, and she shines the most when given a role such as Deana. The main cast of detectives and the gang in Esperanza were also phenomenal and a massive plus for the series.

FUNimation gave this series a few extras for fans who buy the home media release. There was an excellent little art book that showed character profiles and had a written interview with people who worked on the project in Japan. There was also a video commentary for episode three, which I found enjoyable. Thankfully, FUNimation dubbed the three OVA’s of the series, which I was psyched to see. Seeing the second OVA was great, considering it was a one-off case (which I like seeing the most in cop drama anime). But it was nice getting more time to try and connect with the cast of characters.

Overall, I wish that Double Decker! Doug & Kirill had stayed within the confines of a more believable buddy cop series than turn into an interstellar world. Adding the Nikai angle felt out of place, almost like a hook that the studio felt was needed to keep me interested in the show. I would’ve liked more one-off cases that were loosely related to Esperanza to see how Seven-O would stop the crime organization in its tracks. Because when Double Decker! Doug & Kirill had more realistic one-off cases, the series was stronger and more enjoyable. However, I think the comedy will work for many fans, and FUNimation gave it their all when it comes to the acting. But I’m not sure if this series reaches the ranks of other well-done cop dramas, leaving me sad about the entire series as a whole.