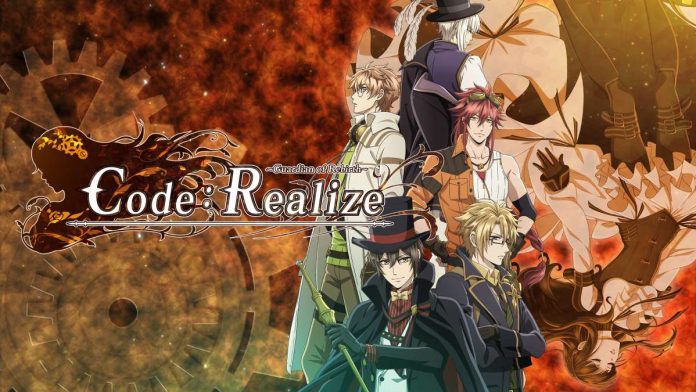 It’s always a chore when breaking down an anime that didn’t evoke strong feelings. If a show does a lot to make you like or not, you can typically pinpoint what made you feel the way that you did. Sadly, Code Realize – Guardian of Rebirth – (Code Realize) wasn’t able to do much to make me feel any affinity to it. It had some strengths and some weaknesses, but it was such a safe and typical anime that I found myself bored most of the time. When I felt engaged, it was more of an enjoyable watch. So what made Code Realize less noticeable than other anime series?

The story of Code Realize takes place in England with a steampunk aesthetic. Our main heroine, Cardia Beckford, is locked up in a mysterious building so she can stay away from other people. She has been poisoned by an artifact called the Horologium that is embedded into her chest. The poison inside of her makes it so she can’t touch anything that isn’t treated with unique material. Any objects or people will begin to erode/burn up. The Queen’s royal guards attempt to capture her, but as fate would have it, the gentlemen thief Arséne Lupin snatches her away. Lupin brings Cardia to his hideout and works out an agreement to help Cardia learn about her past, find her father (who has been labeled dead for some time), and make her wish of being able to touch people come true. As the series progresses, viewers find out that it’s not only the royal guard that’s interested in Cardia, as an intelligence agency called Twilight also has plans to use Beckford’s daughter for a sinister plot.

If there’s one thing I enjoy when watching an anime is the steampunk aesthetic. It’s captivating to watch. I enjoyed a lot of gadgets used by Impey and found Van Helsing’s weaponry to be my favorite. I’m a sucker for rifles/shotguns that characters twirl around (such as Mami from Madoka Magica and Ashe from Overwatch), and so I quickly became attached to the tools used by Helsing. But subtle parts of characters’ wardrobe were interesting choices, such as Cardia’s headband or the headphones Dr. Frankenstein wore. It was these types of options for characters that I liked and it added a nice touch to the aesthetics of the series.

Surprisingly, the music for Code Realize was one of the better soundtracks I’ve heard in an anime. During fights, whether it be with airships or characters, the violin, and the piano added an incredible dramatic tension to the more exciting moments. Usually, when an episode reached its halfway point, the song would start softly then blast out as it would hit the break. It was great and made the action more enjoyable. Plus, the music used in the more tender moments, especially between Cardia and Lupin, also added a nice touch that would have not been as good without the music.

Unfortunately, there were many unnecessary parts added into this series, making me wonder if 12 episodes were just too many for this project. Episode three, in particular, seemed rather useless, considering how minuscule the vampire character Delacroix II was. He didn’t do anything but watch the gang’s dog and joined in on a little action toward the end. And as much as I enjoyed having Van Helsing in the series, his backstory involving the vampires felt like filler. It didn’t seem that Cardia’s family had much to do with anything about the vampires, so it felt odd adding it in. It seemed like a cheap way to add backstory to Helsing when I didn’t feel it was needed. He has his own goals to take down Twilight’s leader (Finis), so I’d have just left it at that. I think the mystery to why he held a grudge would have been a better storytelling idea.

And as far as storytelling goes, I can’t say I was impressed. We get that there was a three-way battle between Lupin’s gang, the royal guard, and the intelligence agency Twilight. But I felt more confused about why the series was taking a roundabout way to explain what motivates each faction. Then out of nowhere, another group joins the fray that the main character, Saint, was a part of this whole time (Idea). It was as if Code Realize was trying to keep as many things as they could as a mystery to add shock value, which it didn’t accomplish. It felt generic and cliched compared to what anime fans expect when we got to the interpersonal interactions throughout the series, adding another layer of boredom (compared to just the main storyline). It was clear that all of the men were going to develop feelings for Cardia. It didn’t seem like any would act on it and it left Lupin to carry the romantic load (sorry Impey, you had no chance). If we can already guess who will end up with Cardia early on, it becomes hard to stick around, especially if the two get along swimmingly.

None of the surprises from the main storyline jumped out at me. It was evident that there was a connection between Cardia and Finis. Their father’s goal to stage a coup de tat (called Code Realize) felt lame, especially since Issac Beckford’s main goal was to become a god. He wanted to end suffering, but he felt worried after his village vilified him for his science. I might have had more interest in this story if it took less time to arrive at the main plot. Instead, we had needless filler, such as an aircraft race (for one example). And once we got to the main story, it took too long for it to develop and keep me engaged. There was too much talking and not enough storytelling going on. When the action was happening, Code Realize was a fun watch, but there were too many lulls that plagued the series.

And while I mentioned earlier how I liked the steampunk aesthetic, it was only on the few items I mentioned earlier that it made a difference. The character designs were bland and didn’t do anything to get me to become invested. It was clear that Cardia was going to fall in love with Lupin, so I found it hard to get attached to anyone (it’s troubling how I found myself more interested in inanimate objects compared to the characters). The designs were basic and didn’t do anything to stand out from other series.

The English cast was star-studded with actors such as J. Michael Tatum, Ian Sinclair, Micah Solusad, David Wald, Justin Briner, Jill Harris, Stephanie Young, Austin Tindle, Brandon McInnis, Trina Nishimura, Greg Dulcie, and Chris Guerrero, all who do an excellent job in many anime projects. But none of their performances stood out or made me think it was one of their best performances. They were dependable, which isn’t a detriment, only a surprise. I will say that it was interesting to hear Justin Briner play a villain/antagonist, considering what fans usually get from him (Deku, Luck, etc.). But given some of the actors involved with this project, I expected more of a pop with their performances.

As far as the release goes, Code Realize comes in a standard Blu-ray case with a cardboard slipcover. It comes with more extras than I was expecting, including a full-length OVA episode. Sadly, this episode wasn’t dubbed, and it takes place after episode 12 (although I’m not sure if it takes place after the wedding between Lupin and Cardia). I was disappointed it wasn’t dubbed, but it’s still more extras for those who might be interested in purchasing the release compared to other recent titles I’ve reviewed.

Code Realize isn’t the genre of anime that I like the most. And while it didn’t do anything significant to trouble me, it didn’t do much to make me praise it to the heavens either. It does some things well, such as giving viewers a wonderful steampunk aesthetic, and the soundtrack for the series is one of the better ones I’ve heard. And maybe you’ll get more of a chuckle than I did with the series using famous character names such as Lupin, Frankenstein, and Sherlock Holmes (although he was called Herlock Sholmes). But there wasn’t anything in this anime that grabbed me or kept me feeling invested and engaged. It was boring to a point, and there were too many peaks and valleys that made binging this series difficult. It’s not terrible, but not fantastic, and ultimately that’s the series’ downfall. There’s so much anime out there that I feel Code Realize will suffer the fate that people will forget it happened unless mentioned by a hardcore fan or to anyone who has played the games.

Cons: No one performance stood out; many lulls throughout the series; the vampire story line felt forced; OVA episode wasn’t dubbed in English.