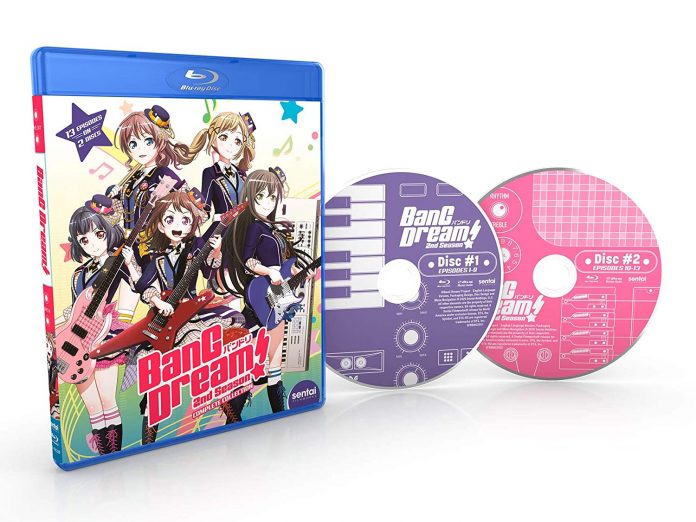 Although there has been a considerable boon in isekai anime, the school idol anime genre has flooded the airwaves. While not my favorite genre, I can appreciate ones that either blow you away with their music or visuals. Or whatever you’d call Zombieland Saga, which was too marvelous for words. So with a crowded genre, I wasn’t sure what I’d get with Bang Dream! 2nd Season. I was convinced that I’d get the typically cute girls playing music with some good tunes. But I wanted to know if I was in for something unexpected from this school idol anime. And despite not knowing much about the history of this franchise, I was ready to buckle down and let the music take me away. Sadly, it more or less toed the line of a standard anime series of this type and didn’t do much to separate itself from the true giants of the genre.

Full disclosure, I did not watch the first season of BanG Dream!. However, I didn’t feel lost with what was going on in the second season. At the same time, it took a bit longer for me to remember names and faces. So if you haven’t seen Season One, I don’t think it will be a massive detriment for your enjoyment of the following season.

Poppin’ Party returns as Kasumi, Tae, Rimi, Arisa, and Saya return for their sophomore year of high school. The gang once again cannot wait to continue playing their music for more people and to have their friendship strengthen as time moves forward. To begin this second season, Poppin’ Party was asked to perform at a venue reopening celebration at the last minute. The gang of Poppin’ Party watch as many other school idol bands take the stage to perform and are in awe at how amazing they are. And upon hearing that a rival band Roselia was going to host their own concert later, Kasumi from Poppin’ Party jumps the gun and announces that her band will as well. This declaration leads Poppin’ Party to learn that hosting a self-sponsored concert is a lot harder than it looks. The group is tasked with figuring things out before it’s too late. So with the help of their friends and music Poppin’ Party, for 13 episodes, do what they can to make this concert possible and continue performing for their fans.

There isn’t much else to the overall plot. After realizing how hard it is to run a self-sponsored concert (getting a venue, setting ticket prices, practicing for the show, etc.), the girls of Poppin’ Party start to scramble to make things work. So throughout the series, Kasumi and the rest of her group learn the essential lessons about making a concert happen. Stuff like picking a perfect venue, learning about the advantages and disadvantages of holding one outside, the power of being able to bring in any performer they want, and the rest. It became very predictable throughout the first half of the season. It’s not as if I was expecting some complicated plot to keep me invested. Still, it did feel rather dull at times, considering that a lot of these issues (I thought) were rather obvious.

Honestly, things didn’t get interesting until Tae had to choose whether or not to stay with Poppin’ Party or RAISE A SUILEN. Tae’s old friend was scouted by a producer and felt that Tae would be a great backup guitarist for the group. It turns out all the members of RAISE A SUILEN were expertly chosen to create a super girls idol band. The group did show a lot more promise than any other band in the area, leaving Tae confused about where she belongs: with her friends who were having fun or a new band that could help her feel the music. Tae felt like she lost a bit of her energy for music. It created an excellent drama that I felt was otherwise lacking in this series as Tae tried to juggle being in both bands. Tae rushes to make it back in time for the school festival concert and misses it, which causes a massive rift between her bandmates and other bands. This was the type of conflict that I was missing. It was the climax of the series for me, more so than if Poppin’ Party would be able to hold their concert. And sadly, the issue between Tae and Poppin’ Party was taken care of rather swiftly.

I wouldn’t say the story isn’t impactful to some degree. Seeing friends start a band and rally together is something that I find interesting in real life. But with BanG Dream!, it felt too generic for me. I needed something more. I think the series tried hard with Rokka, considering she was a massive fan of Poppin’ Party and decided to leave her home to pursue a music career. But that part of the story always played second fiddle to the main cast and didn’t resonate as much as I think it could.

Oddly enough, I was enjoying the music a lot more than I was expecting. Goes to show you how universal music can be (since this is nowhere near the genre I’d otherwise listen to. My only issue with it was that I enjoyed the music from nearly every other band more than Poppin’ Party, which defeats the purpose of staying connected to the main cast of BanG Dream!. Roselia was not only more composed and more put together, but had a fantastic sound in every song I heard them play. They were great, and I would’ve loved to hear more of their work. The same could be said for Afterglow, who was also amazing to hear in the series. Poppin’ Party wasn’t terrible, but not my favorite, which lessened my enjoyment of the series.

I also was not expecting the constant 3D animation in this series (although I’m not well versed with BanG Dream!, so maybe I should have). With idol anime, the musical performances are typically in 3D to help make things more believable. But I’m used to the 3D ending after a performance. The 3D lasted the entire time in this series, which caught me off guard and felt jarring. Call me old fashioned, but I enjoy seeing things in 2D for the menial stuff. I researched how the animation in the second season improved from the first, which only makes me question why it was all in 3D in the first place.

The English dub for the second season was done by Sentai Filmworks, which struts out a star-studded cast for BanG Dream! 2nd Season. Juliet Simmons (Kasumi), Luci Christian (Tae), Christina Kelly (Saaya), Maggie Flecknoe (Arisa), and Avery Smithhart (Rimi) all made up our leading girls of Poppin’ Party. They all complemented each other well and gave off a great vibe of friendship and lovers of music. Simmons does a beautiful job of sounding optimistic as Kasumi, and I cannot stress enough how bubbly and happy she could make her voice. However, I will give the nod to Brittany Karbowski for her performance as Rokka. Rokka’s origin story was compelling to me as well as her passion for music. And Karbowski does a beautiful job acting out the emotional rollercoaster that Rokka seems to experience. Karbowski always seems to nail it when stretching her acting chops to convey emotional moments through her voice alone. It’s a real gift, and she nails it once again in a very illustrious career. Overall, I think dub lovers will enjoy the entire cast’s performances. Sentai Filmworks did an excellent job adapting the story in English.

Sentai Filmworks has a standard release for BanG Dream! 2nd season. It’s in a classic Blu-ray case that holds two discs. Not much else was added besides clean openings and closings.

I wanted BanG Dream! 2nd Season to stand out compared to other school idol series. I need more than just cute girls playing music (there’s already a ton of series like that out there). Being able to stand apart from the crowd would help create something more memorable, and I think BanG Dream! just missed the mark. I enjoyed the music much more than I was expecting, as well as some interesting side characters and conflicts that were added. But the story about setting up a concert doesn’t create a ton of enjoyment for me. If you were a fan of this franchise from their mobile games or previous season, I think this season does a ton to improve and reward your fandom. And even if you didn’t see the first season, I think it’s easy enough to follow with the dynamics that have been established. But for someone on the outside looking in, it doesn’t do much to differentiate itself from other school idol anime.

Pros: Music from other bands sounded amazing; the storyline where Tae had to choose between Poppin’ Party and RAISE A SULIEN; a wonderful English cast.

Cons: Having the constant 3D animation outside of the musical performances shocked me and felt weird; a rather simple story with hardly any intense moments; enjoying other bands music more than Poppin’ Party; sides characters feeling less impactful.