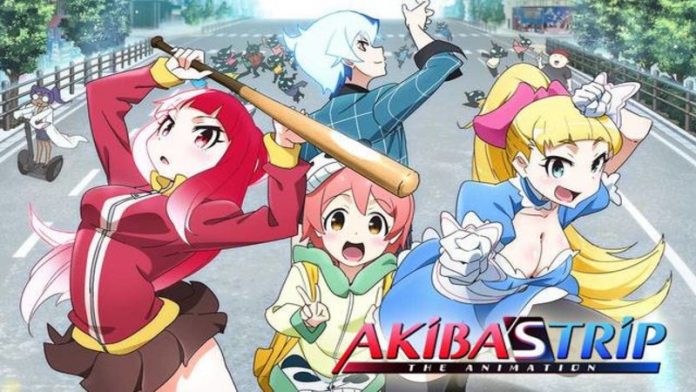 When it comes to ecchi series, they can be hit or miss as far as overall enjoyment. Going into these series, you have to realize that the level of fanservice takes precedence over everything else. These series rarely focus on other elements; their main sell is sex appeal. You’re not interested in the plot and typically know what you are signing up for when you dive into these types of series. With Akiba’s Trip, you know what you are getting into, as it’s a well-known game series. What fans hope for is whether it sets itself apart to be worth the time and investment. Otherwise, it will fall into the same trap as many other ecchi series.

In Akiba’s Trip, vigilante squads keep the peace in Akihabara. Matome and her family have been charged to watch over the city to protect it, and coincidentally, Matome drags a civilian into the battle against an evil force called “Bugged Ones” who will try to purify the “Otaku paradise.” After Matome kisses Tamotsu (to save his life) and turns him into a half Bugged One himself, the two form a group to help stop any Bugged One’s plans to take over the city. And here’s the kicker: neither one is allowed to leave the city limits. It’s up to this newly formed vigilante group “Electric Mayonnaise” (featuring Tamotsu, Matome, Tamotsu’s sister Niwaka, and their new friend Arisa) to stop the demise of Akihabara from the Bugged Ones.

While this series has very little (if any) to do with the video game series, there was one common theme, which is undressing the enemy to defeat them. To stop anyone who has been possessed by a Bugged One, all you have to do is exposed their skin to the air to free victims from their control. So it was up to Tamotsu to undress both men and women to stop any enemy they faced. So with that part of the series, you could guess where Akiba’s Trip went and how lewd they would get. Our lead heroines had a lot of screen time with clothes ripped or slashed apart so you could see panties, bras, and a lot of skin (with the main culprit being Arisa, although Matome had plenty as well). In fact, when the trio of girls are trying to become models, there are plenty of scenes that would make fans roll their eyes. Of course, some men were also undressed in this series (including Tamotsu), but not nearly as many as the girls, and Arisa’s tops had trouble staying on and the skirt for Matome had its fair share of malfunctions. So how much you like or dislike this show will depend on your tolerance for that kind of thing. After all, like the video game series, this kind of premise is par for the course.

Usually, when reviewing a fanservice show, I try to be careful, because I consider the goal each ecchi show is trying to accomplish. Is it taking itself too seriously, leaving viewers confused on what the overall message is? Or does the show realize how silly it is and just ham it up as much as they can (and give you extreme levels of lewdness)? I can’t trash a series for being true to what it is. It’d be like going to a fast food restaurant and expecting a prime cut New York steak. Akiba’s Trip realizes that it’s just an ecchi show, in it for the fanservice and to make fun of nerd culture. It doesn’t try to take itself seriously.  It’s not trying to say “hey we may have a lot of fanservice, but we’re classy about it.” No, this series focuses more on the otaku culture, with a heaping helping of fanservice in between. Although the production values varied, it felt like the fanservice was simply something they could fall back on so a lot of other inconsistencies wouldn’t be noticed. And for me, I need more than that.

When it comes to ecchi shows, they need to offer a little more than just fanservice to hold my interest. Otherwise it’s just a dime a dozen anime series that tries to sell itself with sex appeal and it’s harder to pitch as a must-buy. And Akiba’s Trip tries to differentiate itself by its humor as well as call-outs to other fandoms and nerd culture. But for me, these types of gags and parodies didn’t work. I found a lot of the episode of the week obsession for Tamotsu flat out annoying. I didn’t care about any fad he decided to follow, and because episode three – nine had a “villain of the week” formula, adding a new obsession every week did it very little favors. Some were cute, like the WWE and Yu-Gi-Oh parody, but it didn’t make me become a fan of the show. It was just a gimmick that missed its mark with me. Akiba’s Trip played on all kinds of obsessions like pop idols, computers, and figures that I’m sure many people can relate too. But I’m not a hardcore enough fan of these types of things to get the jokes or care about them. If there was an episode about hardcore anime collecting, then maybe I’d feel a little different.

I'm actually serious about this one

Even the main storyline, when we find out about Matome’s family history of being the leader of the Bugged Ones, felt boring. I give Akiba’s Trip credit in that more episodes were needed in the storyline than other ecchi series. But if I don’t find it that compelling, maybe it would’ve been better if it was just the last two episodes that meant something. The backstories, the plot, everything seemed dull and there was one thing I looked at to see why that may have been the case. I think the root of that issue was not only that I didn’t care about the characters, but the lead character Tamotsu was so annoying to follow. That might have been the point, he was undoubtedly an homage to obsessed otaku. I think he did a good job portraying that, which is probably why I found it annoying. I suspect that many other fans feel the same way, even though a little of that is inside all of us. But I found Tamotsu to be very uninteresting and lame. He happens to get involved, gets powers to fight the bugged ones, and in turn makes Akihabara his playground where he can do whatever he wants. This story revolves around him a little too much, even adding a love interest for the plot’s sake. Matome developed a crush on Tamotsu only for people who “ship” characters. It felt forced for Akiba’s Trip to try to add another layer to the story. To which, I ask why? It wasn’t needed for what it is, but here we are.

While I think the level of enjoyment for viewers may vary, I have a feeling the English cast had a blast in this anime. It’s silly, and it allowed actors and actresses to go to places they rarely go. Some of the crazy lines of the villains had to be fun, similar to how crazy it must have felt working on a project like Pop Team Epic. I enjoyed the bits we got from the one-off characters, voiced by Christopher Sabat, Greg Ayers, R. Bruce Elliot, and Janelle Lutz. But the main cast of Alejandro Saab (Tamotsu), Jād Saxton (Matome), and Nathalie Hoover (Arisa) got to strut their stuff with a great deal of wackiness. It had to have been fun for them, and I assume their level of enjoyment in working with this series was high. Bryn Apprill (Niwaka) did a fantastic job as well, but I didn’t think she had the freedom with her characters the others did.

FUNimation gives this series a simple cardboard slipcover for the Blu-ray case. However, there is an episode commentary included for episode one, as well as trailers, textless openings, and promos. The home menu also caught my eye considering it had the girls more scantily clad from what the box art was.

There are a lot of little things Akiba’s Trip adds that make the series surprising, such as having multiple ending songs as well as using Street Fighter footage and Carl Jr’s in the anime. Heck, even all the cosplay that Arisa did was something I was interested in. These are all little things that would typically have me praising an anime more than panning it. But when push comes to shove it’s an ecchi series that has a lot of compromising moments for its female characters, and it’s jokes missed the mark to me. If those are the kind of series you like, then I don’t think you’ll be disappointed. And the many hobbies that Tamotsu partakes in will likely please many hardcore otakus. Overall, I don’t think it’s a bad series and will have more fans than detractors. Sadly, that isn’t for me, so my score for the series might be lower than other reviewers.

Pros: English cast got to act out some funny scenes; getting to use Carl Jr’s logo and Street Fighter Footage; accurately depicts how obsessed fans can get with hobbies; will not disappoint ecchi anime fans.

Cons: Tamotsu was a boring/annoying lead character for me; many jokes missed their mark for me; not a huge fan of the obsessions Tomatsu goes through; love interest added for plot convenience.