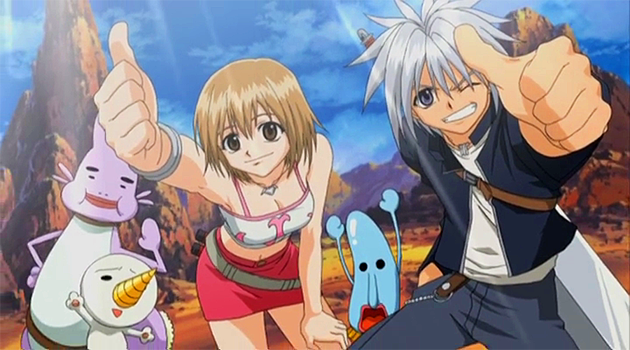 If there’s one thing that can bring me down it’s wasted potential. It bothers me in anime when a character, storyline, or show misses badly when it initially appeared extremely promising. Even today, some shows leave me scratching my head as to why the creators/producers didn’t go in a direction that would have made the series much better than it was. Whether it’s the Toonami of old or the current block, there will be shows that fall flat and make fans wish things went differently.

When looking back specifically at Cartoon Networks’ Toonami, there was one show that had such a stranglehold on my attention and quickly became one of my favorite series. That series was Rave Master, and after re-watching what I could, I don’t understand why this show was so attractive to me when I first saw it. It was geared toward a younger audience, but it had all the aspects I liked when I was younger (and even now). I still think of it fondly, even though it looks and sounds a lot sillier than it should have been. Doing some research and reading the manga truly opened my eyes and made me fall in love with Rave Master all over again, and forced me to believe that a reboot should be in store for this series.

For those who haven’t heard of it, Rave Master is a tale about Haru Glory becoming the new Rave Master after a massive battle that culminated into a huge explosion called the “Overdrive” that occurred 50 years ago. It was so destructive that it destroyed 10 percent of the entire world. Haru, completely oblivious to all of this, fishes out Plue, who is a being that can point the Rave Master to every Rave stone, and is met by the old Rave Master, Shiba. Shiba was being chased by an evil organization called the Demon Card and Haru ends up saving Shiba, thus proving his strength. Shiba anoints Haru as the new Rave Master, and he and Plue travel on a massive adventure to find the missing Rave stones and save the world. It sounds just like any old shonen story, but Rave Master was able to offer a genuinely heart-tugging story (for those who have read the manga).

When it debuted on Toonami (2004), this was the series I couldn’t wait to see every Saturday night. Despite the odd script writing, I found myself drawn to the story from the jump. I enjoyed watching Haru thwart the Demon Card and watching Elie use her tonfa-blasters to blow everything up. I thought the character designs were cool as well, and I fell in love with the main cast instantly. I wanted Haru and Elie to reach their goals and win every battle they came across. Some of the creatures were oddly drawn, but nothing kept me from watching it. The action itself was enjoyable and it seemed compelling at the time. Of course watching what I can now (since only three volumes are available legally on DVD that I could find), it feels like it was adapted with comedy in mind, and that the action was secondary. That hurts the anime series overall, but Rave Master still shares a special place in my heart.

With 12 volumes (out of 35) adapted in 51 episodes, there is still a ton of content left for an anime to explore from this series. So what’s stopping Rave Master from getting a potential reboot? Popularity/demand has to be the only answer that matters. Rave Master, while one of my favorites, is more of a fringe title than a mega-series like Fullmetal Alchemist or Fate/Stay Night. Even if you look at the fact that Rave Master was also picked up by the Syfy channel on Ani-Mondays five years after it’s Toonami run, it’s nowhere near as popular as other series that have received a reboot. For that to happen, there needs to be a huge demand by fans or a lot of profits guaranteed to recreate this series. I don’t see that happening, even though Rave Master was written by Hiro Mashima, who is the creator of the hit franchise Fairy Tail. Rave Master was Mashima’s first series to be publicized and gathered a cult following, which it still has to this day. Plus, for fans of Rave Master, Mashima has drawn and written a ton of crossovers between his two series, and I don’t mean the crossover episode fans were treated too.

Some might call this lazy character design, but both Sieg Hart and Jellal became pivotal characters in their respective series (not to mention that they begin as evil and become allies for the main heroes). While many poke fun at how Mashima drew the same character THREE TIMES, it didn’t bother me whatsoever. Besides the characters there are also interesting little Easter eggs hiding in Fairy Tail that are from Rave Master. For examples such as Grey’s necklace looking exactly like Haru’s first Rave stone, Panther Lilly stealing a Musica crafted sword, both series having a group called the Oracion Seis, and PLUE (just to name a few!). For those who are just getting into anime (or Fairy Tail itself) and didn’t watch Toonami earlier, that could grow a contingent of fans who are curious as to what Fairy Tail is referencing. There would have to be a huge group of people wanting to know, but still, it’s something to think about.

*Warning there are a couple of spoilers in this section*

Learning what I know now about Rave Master I am very upset at the content and storylines that were never adapted. There are a ton of characters that I had no idea even existed until I read the manga, like Julia in human form, Belnika, Deep Snow, Nagisa, or Celia. Add in the individual relationships that were developed, such as Shura and Haru’s sister (Cattleya) or Musica and Reina, that completely surprised me. Or Elie’s complete backstory (which was the focal point that kept me watching back when it was on Toonami). The anime never really gave fans a clear answer as to why she lost her memory, who she is, and why many confused her with Resha Valentine. So while this story is a typical shonen action series, it could have become even more compelling if given a chance for more comprehensive adaptation, especially when looking at the characters who died. There was growth by both main and side characters, huge lessons learned, and a lot of tears, all of which made Rave Master enticing to follow.

If a reboot did occur, I would love to have the entire original dub cast make its triumphant return to this series. I greatly enjoyed listening to veterans like Yuri Lowenthal (Haru), Michelle Ruff (Elie), Doug Erholtz (Musica), and Crispin Freeman (Shura and Sieg Hart). However, something that was lost on me until recently was that the cast also included Tom Kenny (SpongeBob and Ice King) cast as Griff, which made this dub even more special to me as time went on. I like voices that stay consistent in series, so having the same cast as it had before would be a huge treat. Fans would line up in droves if a cast like this were working on a big project. Again, the script was a little too funny for its own good, but if staff members would take Rave Master more seriously, I think it would become a big hit in Japan and the U.S.

It’s a shame that this series only has three DVD volumes available for the public to consume, as I think this should be a project that Discotek revives. Rave Master seems to be more loved than I expected; it won a vote-in round for Toonami Madness in March, and others have mentioned in previous articles that Rave Master should be rebooted. It probably won’t happen, given how weak sales and viewership were in Japan. And I do believe the mess with Tokyopop losing their licenses is somewhat to blame for the lack of much interest in the U.S. And since Hiro Mashima has moved on to Fairy Tail, there’s no real need to create a more faithful adaptation. I highly suggest reading the manga to get the full story if you are like me and a huge fan of this franchise. It’s a lot better than what the anime portrayed, and if you want to see how it was supposed to end, you’ll be rewarded. If you enjoyed the usual antics of Fairy Tail, this would show you how it all began.

C.J Maffris is an editorial writer for Toonamifaithful.com. He loves discussing all things, Rave Master or Plue. Feel free to talk to him about the series on Twitter @SeaJayMaffris.