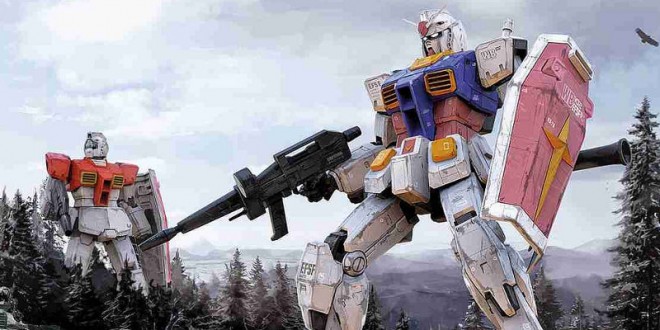 I strongly believe that the future is becoming more and more bright for fans of a certain mecha anime. In the following year the world will be getting the Pokemon Go! app to take control of there lives. But before that, fans of the Gundam franchise are taken for a wild ride in Japan to what could be the more realistic Gundam expereince l ever. While I’d wish for some of these attractions to arrive in the U.S, it’s still very rewarding to see what the country of Japan is doing when it comes to giving fans the ultimate Gundam fun. While no one is piloting a real giant robot yet (the general public wouldn’t have access to those kind of state secrets), fans are still teased with what could feel life-like.

I was shown an article about how it is possibly for someone to become a pilot of Gundam. The article came from Japanista.com, which helps bring the Japan experience to those outside of the country. They give readers a ton of information when it came to places to eat, sights to see, and of course the culture. The website itself does an amazing job to painting a picture for those who want to make a trip to the country (and can’t afford a vacation). So of course there must be a huge following when it comes to things like anime and Japanese games. With how popular the Gundam franchise is, this article opened a window to what gamers and what fans of the series want.

I couldn’t believe how real this video game looked as I was reading about it. The fact that technology has been created for an arcade video game looks like something that any mecha fan would want. The article gave some sweet snapshots of what the cockpit looks like, and how real it feels for the pilot. While I am still waiting when giant robots are available, this virtual reality game is definitely the next best thing. If anything like this ever comes to the United States, I might not leave my house for days (who needs work when you can pilot Gundams!).

To me this video is so entrancing, and makes stop and think that this is simply a video game for fun. This shows how far developers have come when we are talking about Gundam video games. There have been so many, and I can only imagine what the first game would look like compared to what we are seeing in this YouTube video. This looks realistic and is only missing a rumble function of the entire console. I just want to be able to have a chance to play this game. This just gives fans of the franchise something else to look forward for the future.

It’s just another installment for the Gundam fandom that is a worldwide phenomena. The same website Japanista.com showed how there is a giant museum that sells all kinds of figures, and has a lot of life like models (size and all). Thanks to Gundam, purchasing models of Mobile Suits have become a lucrative hobby for those who’ve enjoyed any of the series. When it comes to Gundam fans, collecting models can be just as important as buying the DVD’s of their favorite shows. I’ve seen them myself in many hobby spots and I’m sure they can be found all over the world (I haven’t traveled outside the country much). It’s a paradise for any fans of the franchise, and brings back found memories when the Gundams first graced the action block Toonami on Cartoon Network.

Toonami is all too familiar with the Gundam franchise, showcasing seven series that goes from the popular titles like Gundam Wing all the way to SD Gundam. Whether it be from making sweet promos or AMV’s, this franchise found a home stateside, thanks to the action block showcasing it to the masses. I have fond memories myself watching G Gundam back when it was airing (Shining Finger and all), and I’m sure other fans reminisce about their favorite series from back in the day. Even as time moves forward, I still find these series a treasure to watch when I can (I know I’m not alone with that thought).

Could the Mobile Suits really return to Toonami in the future? Probably not, but it’s still fun to think about all the fun fans had when Gundam was on the action block. However, it’s not as if the franchise stopped making anime for the public to consume. Not only are there new series out now (Mobile Suit Gundam Iron-Blooded Orphans and Mobile Suit Gundam Unicorn), but the very first Gundam series is being rereleased on Blu-ray! While, I doubt Mobile Suit Gundam will join Toonami, I do think that if Iron-Blooded Orphans receives a dub, then the franchise might make a huge return where in belongs in the U.S. Next to Pokemon and maybe Dragon Ball Z, this is one of the more popular franchises ever created. People love giant robots, and that love will not go away any time soon.

So here we are, with an almost real life cockpit for a Mobile Suit Gundam. It may be a video game but that just means society is getting closer and closer to building a legit giant robot for commercial use. If that does happen, maybe some of the storylines in some of the series could come true (scary thought). However, we shouldn’t dwell on the negatives on what could become an awesome experience for some fans of the franchise. If there is anyway to bring that arcade game to the U.S., I’m definitely all for. If the game arrives here, I’ll hope that that means fans will see some new Gundam series on Toonami. Mecha anime help build the block to what it is to this day. I’m sure fans are in dire need of a giant robot series in the near future.

C.J Maffris is an editorial writer for Toonamifaithful.com. He has a simple dream that involves a reality with giant robots. Feel free to follow C.J @SeaJayMaffris