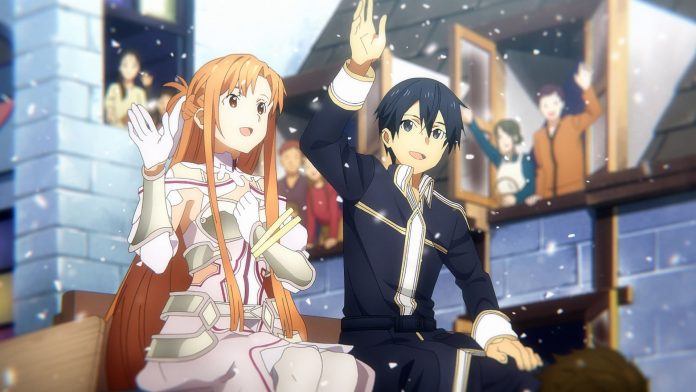 Sword Art Online (SAO) has become a staple on Toonami within the past decade. Every TV adaptation of Kazuto “Kirito” Kirigaya’s journey has aired on the block since 2014. While SAO is far from the first anime about being trapped inside a video game, nor is it a story that revolutionized the isekai (“different world”) genre of storytelling, it continues to resonate with viewers time and time again. SAO delivers a powerful fantasy in which the hero allows viewers to put themselves in his shoes and be a part of his journey as if they are leveling up themselves.

The most recent installment to air on Toonami is Sword Art Online Part Three, Alicization and War Of Underworld, an adaption of volumes nine thru 18 of the original light novels by Reki Kawahara. In this arc, Kirito works part-time for Rath, an organization developing the Soul translator for a perfected virtual reality experience. Because of his prior experience in the game Sword Art Online, Kirito is recruited to test Underworld, a virtual world generated by the Soul Translator. Every venture into Underworld is wiped from his memory when he returns to the real world as part of a confidentiality agreement. However, the name “Alice” remains in his memory. One evening he and Asuna are attacked on their way home. Kirito loses consciousness after the fight and then awakens in Underworld with no memory of how he got there. Thus he begins his journey to return to the real world, a journey that would eventually span over one hundred years.

For the sake of ease, this article will use Alicization to refer to the entirety of Part Three since it breaks down into the two seasons and even further into smaller Alicization arcs in the original light novels.

Alicization was well-received by fans when it premiered on the block with its special hour-long episode in February 2019. Fans consistently engaged with live reaction posts from the Toonami Faithful Twitter account as well as many cast members who would live-tweet during the night. In fact, #SwordArtOnline and related phrases such as character names and the series title regularly trended while the second season was airing, as reported in Weekly Trending. Whether they loved it or hated it, most everyone watching it on Toonami had something to say about Alicization.

However, it wasn’t all smooth sailing. On March 16, 2019, a technical glitch occurred during episode six that disrupted the broadcast twice, once for a commercial break and then again to end the episode early when Adult Swim could not resolve the error. It would later air in its entirety the following week, and then episodes seven and eight were broadcast together on March 30. Alicization went on hiatus in Japan after episode 24 and thus left Toonami shortly after. The series returned with a new season called War Of Underworld, which began airing on Toonami in January 2020. However, like many things in 2020, the new season went on hiatus because the COVID-19 pandemic drastically affected production and Alicization left Toonami once more.

Fans found a glimmer of hope during Aniplex Online Fest when a staff member for Alicization teased that War Of Underworld’s English dub may return sooner than anticipated. Finally, the second season began airing again on Toonami in November 2020. However, its return was quickly soured because of a scene where Leafa is sexually assaulted in a graphic manner that is featured quite prominently in the episode “The War Of Underworld.” It was edited for broadcast like a prior scene that occurred in the first season, but it’s not the first time that sexual assault has been used in Alicization, or Sword Art Online as a whole, for that matter, to shock viewers while also presenting it with a voyeuristic, titillating appeal.

Sword Art Online is arguably one of the most popular anime and light novel series of the past decade despite its issues and is available across multiple platforms online. So, why do viewers continue to tune in to Toonami weekly to watch episodes that are already available online weeks before the television broadcast? The answer is exclusivity. Since the very first season, Sword Art Online’s English dub has premiered on Toonami, and Alicization was no exception. Yes, the dubbed episodes make their way onto other platforms eventually. But, for the fans that want to keep pace with the Japanese simulcast and other SimulDubs being released, Toonami provides the opportunity to do just that. It’s not a perfect system for fans that want the full franchise experience, however. The episode “Prince Of Hell” features characters from the 2017 movie Sword Art Online: Ordinal Scale, which has not aired on Toonami and, frankly, is not likely to air on the block any time soon. This, in turn, could create more dissonance for fans who only watch Sword Art Online on Toonami.

So, what’s next for Sword Art Online? At the time of writing this article, there is no news regarding an adapted continuation after Alicization. Currently, the film Sword Art Online Progressive: Aria of a Starless Night, a spin-off adaptation of the Aincrad arc from Asuna’s perspective, is in production and anticipated to premiere later this year. However, no further news has been released about the movie since late 2020, leaving fans of the anime in limbo. I doubt that this is the end for Sword Art Online, however. The original light novel series is still ongoing, as well as multiple spin-offs. This franchise is not hurting for content, so it’s only a matter of time before more of it is animated. The final episode of War Of Underworld promises that Kirito will return, so fans can also hope that SAO will be back on Toonami when the time comes. In the meantime, please look forward to a future piece from Toonami Faithful that delves further into what lies ahead for Sword Art Online.

Did you enjoy Alicization on Toonami? Let us know by commenting below or directly on our social media. You can follow us on Twitter, Instagram, and Facebook. You can listen to the Toonami Faithful Podcast on Soundcloud, iTunes, Spotify, etc. for interviews, discussions, and breaking news updates. Listen at the link below or on your podcast platform of choice: