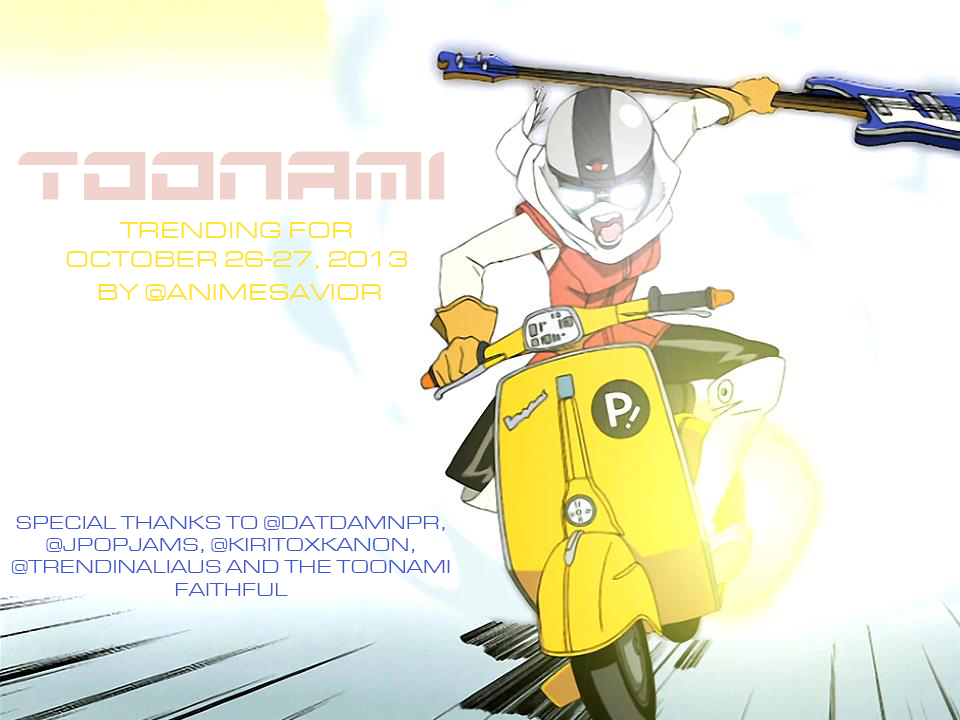 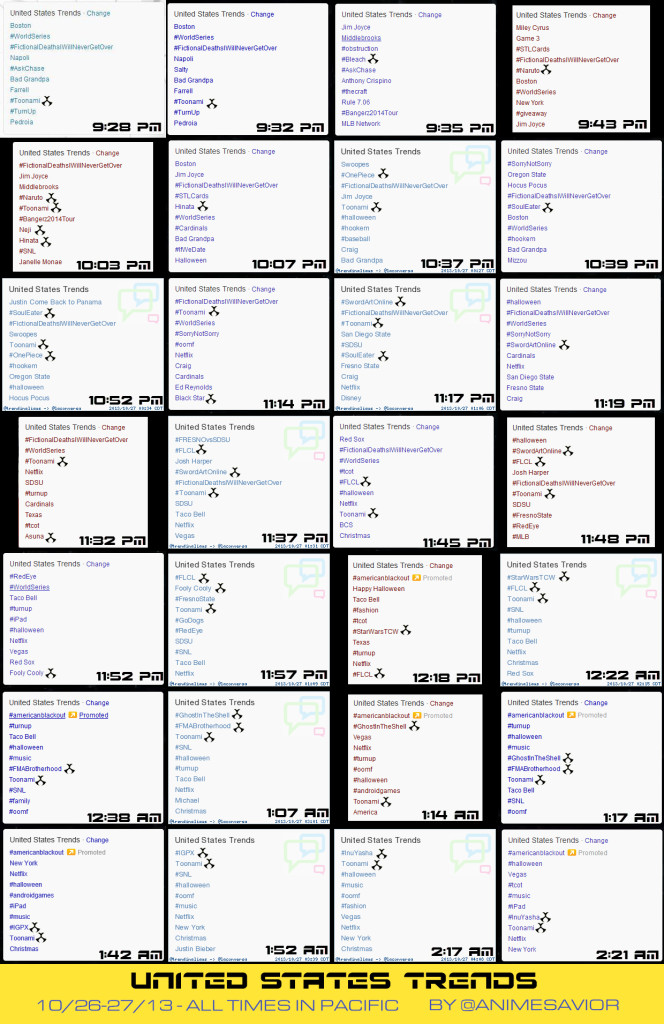 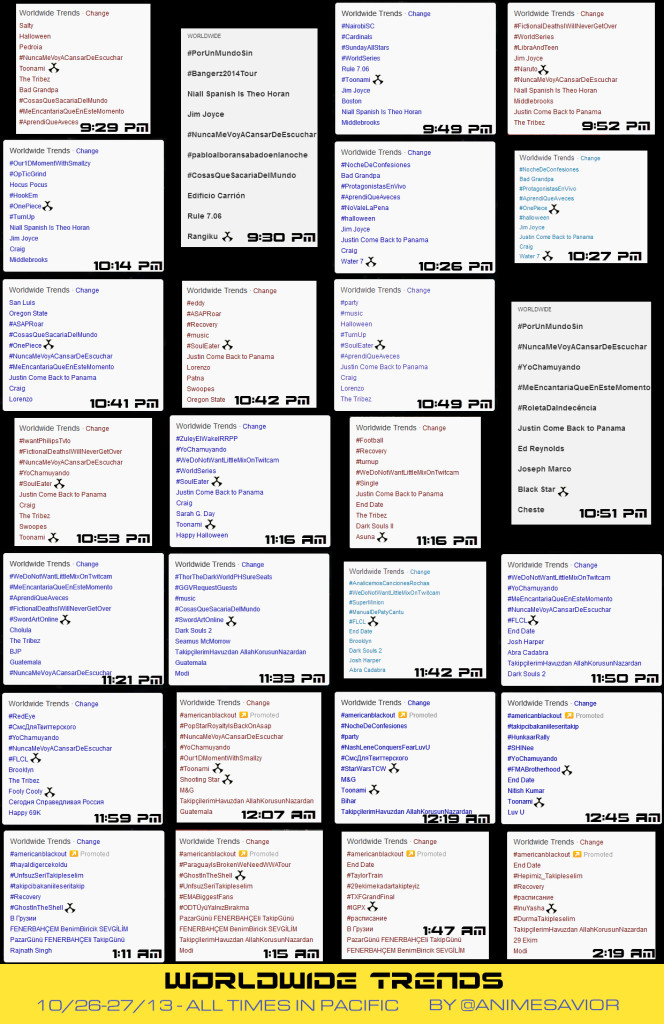 “Nothing amazing happens here. Everything here is ordinary.”

The Toonami Trending Rundown for October 26-27, 2013. We kick off the return of FLCL and Ghost in the Shell, as well as the encore of IGPX as every show trended in the US and every show except Bleach trended worldwide.

We also got some character trends throughout the first half with Rangiku (as her clone fought against Kon and…dare I say, gave him some seducing), both Hinata and Neji (as Neji literally gave Hinata a heart attack), Black Star (as he rushes in to attack Mosquito), and Asuna (as she chopped up some fish and wept with Kirito about their fleeting relationship in Aincrad). In addition for  One Piece, Water 7 also trended worldwide as the Straw Hats entered the watered city. But perhaps the biggest trends of the night, FLCL as well as Fooly Cooly trended both US and worldwide as the show made it’s grand return. Shooting Star also trended as we heard The Pillow’s famed song return to the airwaves. Really, the only blemish of the night was that Bleach couldn’t trend worldwide since Toonami was starting off the heels of the Cardinals’ controversial Game 3 victory over the Red Sox. Can’t win em all, I suppose.

Huge things are coming for Toonami in the coming months. This December, we’ll have three consecutive movie nights to get you all cozied up during the winter break. No details at the moment on what’s gonna be shown and what’s gonna take the month off to make way. And once we get into the new year, Toonami will begin it’s expansion to 11:30pm Eastern as we witness the world premiere of Shinichiro Watanabe’s newest show, Space Dandy. And yes, you heard that right, World Premiere. And of course, like all Toonami shows are required to, it will be dubbed, and Funimation will be handling the US dub and distribution. The fact that this is actually happening is a huge statement in itself in regards to Toonami and the anime industry as a whole. And of course, the fact that Toonami is expanding also shows that the block as a whole is just getting better and better. I’m sure we were expecting 11pm as well, but at least it’s a start.

Last but not least, Daylight savings is coming to an end next week, so be prepared next week to set back your clocks after FLCL ends and be on the lookout for a special surprise for that extra hour. On that same note, tune in next week as Sword Art Online showcases the grand finale of the Aincrad arc and InuYasha begins the Band of Seven arc. (And yes, for those that are wondering, SAO does have arcs in a similar fashion to the Big 3, though out of the 6 arcs present in the novels so far, only 2 have been animated as of now). Get stoked…or depending on your opinion of SAO, screaming “Damn it, this is where the show goes downhill.”

And there’s much more like that to come within the next few months, so stay tuned. Have a Happy Halloween, enjoy the rest of the World Series, and I’ll leave you off with a trivial note: If you watched last week’s Regular Show, you may have noticed that during the Halloween party, Teckmo, whom is voiced by Steve Blum, was dressed as a certain character from a certain (former) Toonami show. What a way to send it off with a bang.

Special thanks to @DatDamnPR, @JpopJams, @KiritoxKanon, @trendinaliaUS and others I forgot to mention for spotting some of the trends on this list.

Ride on Shooting Star. Only Toonami on [adult swim] on Cartoon Network.