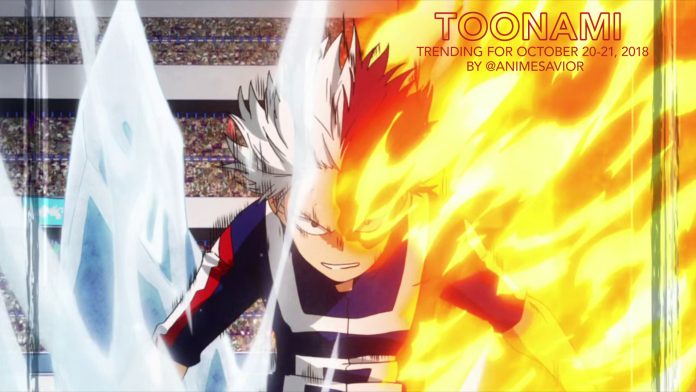 “[Shoto] Honey, You still want to be a hero, don’t you? Just remember, stay true to yourself. You are not a prisoner of your lineage, it’s okay to use your power, to become what you want to be.”

The Toonami Trending Rundown for October 20-21, 2018. FLCL’s run may be over, but the Toonami party continues to rage on as Deku duels Todoroki in the 2nd round of the tournament, while the Scouts try to stop Rod Reiss from breaching the walls, and Gon finds Neferpitou (who is healing a wounded Komugi) wanting revenge for Kite; among other great moments.

In regards to this week’s social media buzz, on Twitter, only Hunter x Hunter would manage to trend in the US, while on Tumblr, #Toonami would trend alongside #Attack on Titan. This week, Daylight Curfew released a new line of Toonami clothing including TOM doing Run the Jewels’ signature “fist and gun” hand gesture. If you want to get some new Toonami swag to wear, click here to check em out. On Friday, Toonami announced that after several years of waiting from fans, the hit anime series Mob Psycho 100 will finally be joining the better cartoon show beginning on October 27 at 11:30pm ET. FLCL will be moved down later in the schedule (which will replace the Samurai Jack doubleheader that ended the block last week which was used as a placeholder), though Toonami has yet to announce its exact timeslot just yet.

Based on the webmanga by “One”, the same person who created One Punch Man, Mob was highly requested by the Toonami community back when its English Dub was being created back in late 2016. However despite requests from Chris Niosi, the voice of Reigen, as well as attempts from Toonami themselves, Jason DeMarco later confirmed that Toonami was unable to pick up the TV rights to air the show at the time.

Mob Psycho 100 joins the likes of DBZ Kai, My Hero Academia, JoJo’s Bizarre Adventure, the first seasons of Blue Exorcist and Tokyo Ghoul, and InuYasha The Final Act as among the titles who originally had their Toonami hopes rejected due to initial lack of interest, an unwilling partner, and/or a competitor snatching exclusive airing/streaming rights to the show first, but due to the persistence of the fans and Toonami themselves, would manage to make their way to the block eventually. For those who still hope that Sailor Moon, Blue Exorcist Kyoto Saga, Tokyo Ghoul:re, Made in Abyss, SSSS.Gridman, among other titles can get over the hump eventually, no doubt this shows that nothing is impossible and that good things come to those who wait.

Not much else to say other than tune in next week for Mob’s debut among other great moments. Later.