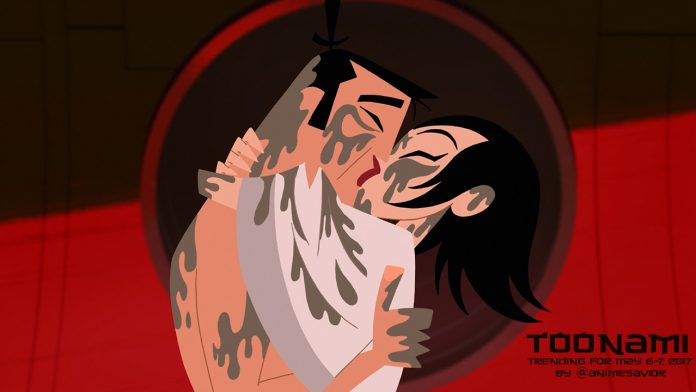 Everybody loves somebody sometime

Everybody falls in love somehow

Something in your kiss just told me

That sometime is now.

Everybody finds somebody someplace

There’s no telling where love may appear

Something in my heart keeps saying

My someplace is here.

If I had it in my power

I’d arrange for every girl to have you charms

Then every minute, every hour

Everybody would find what I found in your arms.

“What we learned tonight: even if someone tries REALLLYY HARD to kill you, they might still love you.”

The Toonami Trending Rundown for May 6-7, 2017. Some big moments for the better cartoon show this week, with Jack and Ashi heading out on their quest to defeat Aku and developing their relationship along the way, while Gon and Killua try to escape from the hands of the Phantom Troupe, and Pain begins a surprise assault on the Leaf village, among other great moments.

Finally, Samurai Jack would once again make the list of Nielsen Social’s top 5 most talked about shows on Twitter and Facebook, making it to the #4 spot. This is the 20th time a Toonami show has made it onto this list since we started recording this feat and the 5th for Samurai Jack this season.

This week, as part of an advertisement with Warner Bros. Pictures, Toonami showcased a preview of the new film, King Arthur: Legend of the Sword, which included an interview with the film’s lead actor, Charlie Hunnam. You can check it out below.

This Memorial Day weekend, following the week Samurai Jack wraps up the season, it was announced on Thursday that Toonami will have an encore marathon of all 10 episodes of season 5 in a row, so for those who missed out on the initial run as well as for those who are up for binge-watching the entire season, you’ll have a chance to do so then.

Tune in next week as Samurai Jack showcases the penultimate episode of Season 5, among other great moments. Until next week, have a (early) Happy Mother’s Day and see you again on Saturday for another round of the better cartoon show.

See You, Space Cowboy. Only Toonami on [adult swim] on Cartoon Network.