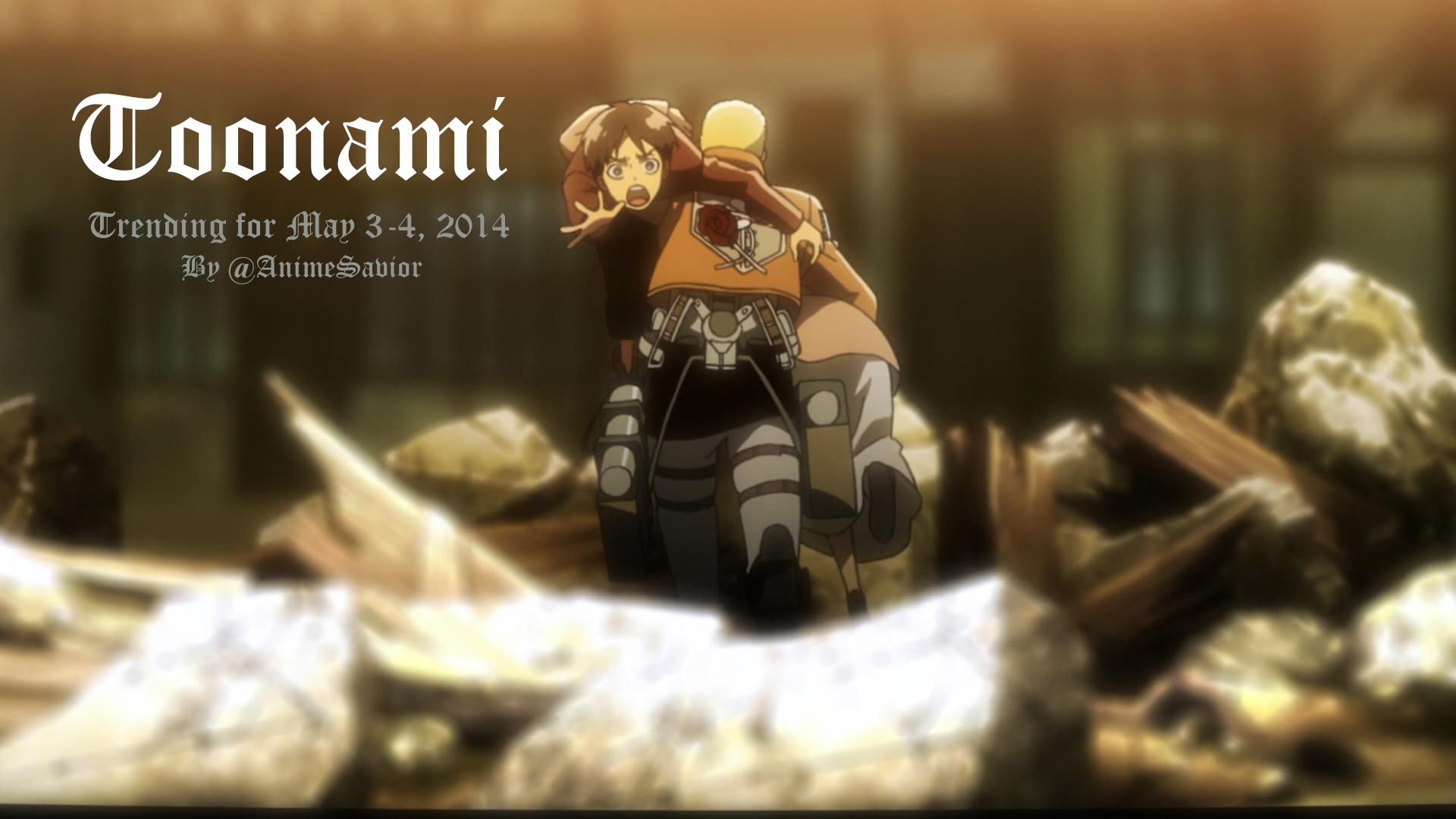 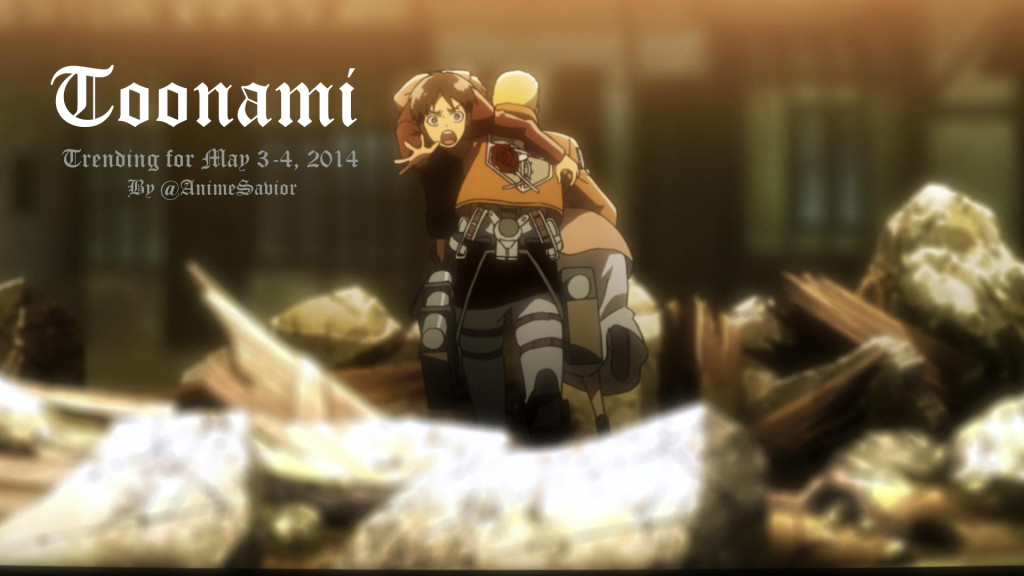 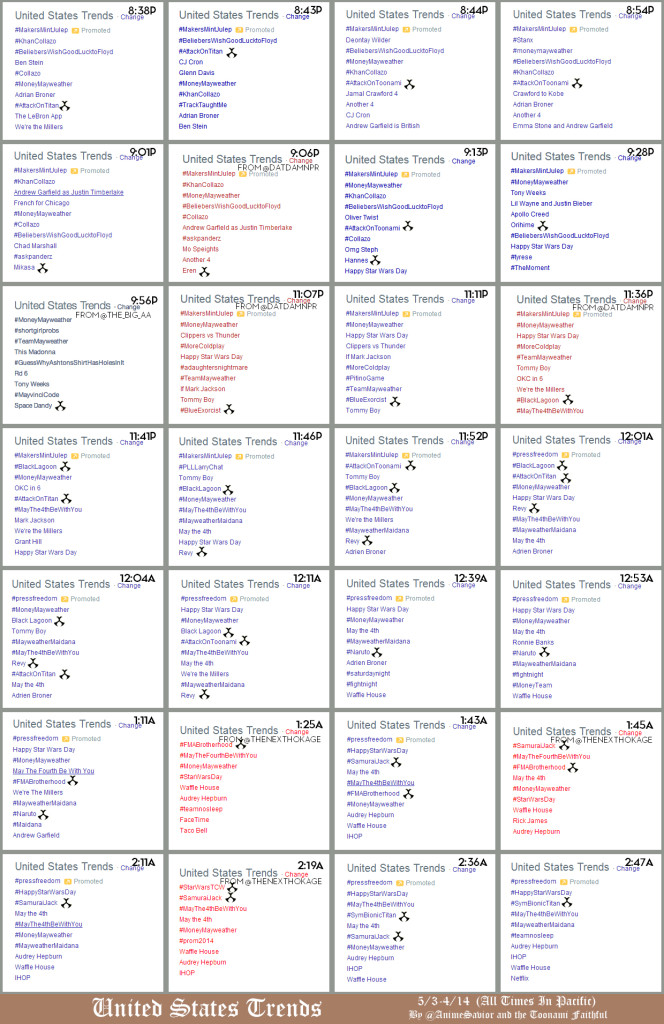 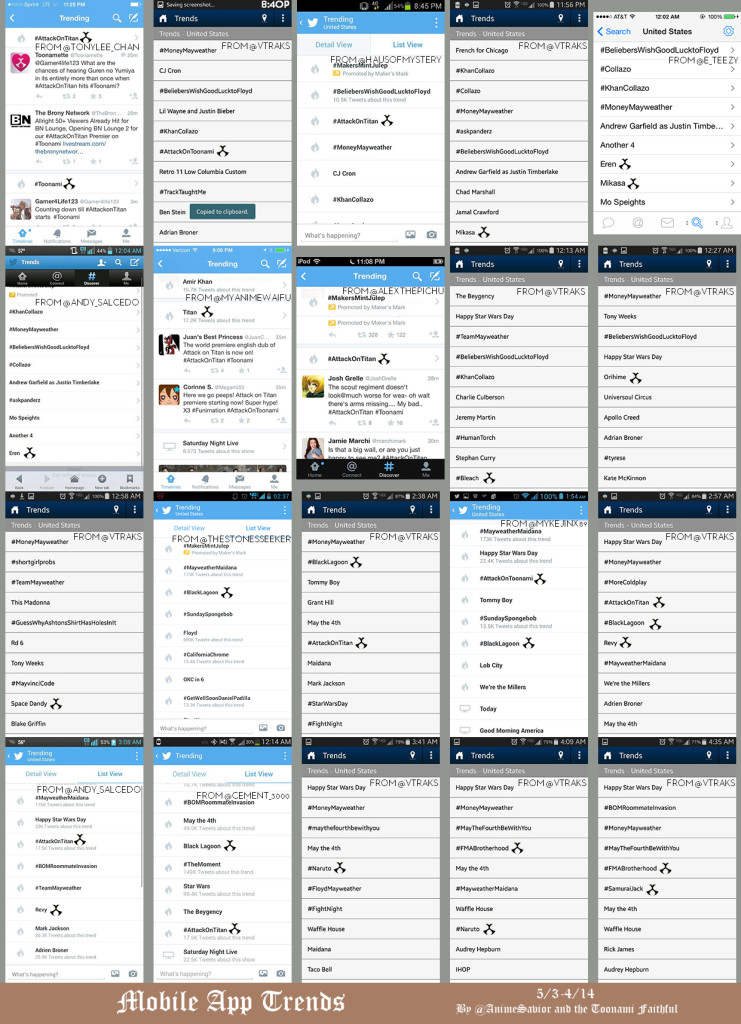 “And just like that, everything changed. At that moment in our hearts, we knew home was a pen. Humanity, cattle.”

The Toonami Trending Rundown for May 3-4, 2014. The arrival of the highly anticipated series Attack on Titan is finally here, and it kicks off with a bang as every show with the exception of Naruto Shippuden, One Piece, and Ghost In The Shell managed to reach either the US or Mobile App trending lists. Unfortunately, nothing reached the worldwide trending list for the 6th week in a row, though considering that Toonami was going against Mayweather’s decision victory over Maidana and the Clippers’ nailbiting victory against the Warriors, among other events, we’ll take what we can get.

We also got some character trends from Attack on Titan (Which set a record from one episode with 3), Bleach, and Black Lagoon; with Eren, Mikasa, and Hannes (as the Titans break through the walls and start ravaging everything in their sight, including Eren’s mom as they escape), Orihime (as she, dare I say, makes quite an entrance), and Revy (as she gets into an argument with Rock basically of how they get things done). In addition, the hashtag #AttackOnToonami and the word Titan also trended.

For those that didn’t get the news, Toonami will have a movie night on Memorial Day weekend perhaps to celebrate the 2 year anniversary of it’s revival. On May 24 at 12am Eastern, Toonami will showcase DBZ: Cooler’s Revenge. Both Bleach and Space Dandy will have the night off to make way.

In regards to Attack on Titan, some of you may have noticed that AOT’s full opening was cut (as the opening show gets to keep it’s full opening as having the block intro followed by an intro bumper than the actual intro would be rather redundant), but according to Jason DeMarco, this was due to miscommunication between Funimation and Toonami, and the full opening should be played soon enough.

Tune in next week as Beware the Batman joins the Toonami lineup at 3am Eastern, among other great moments from the other shows. Things are only just heating up. See you again soon, and may the force be with you.

Editor’s Note 5/6/14 @ 1:40PM PDT: Sorry that this was posted late. We’re having some technical issues regarding the site that prevented me from posting this here on Sunday.

May the 4th be with you. Only Toonami on [adult swim] on Cartoon Network.