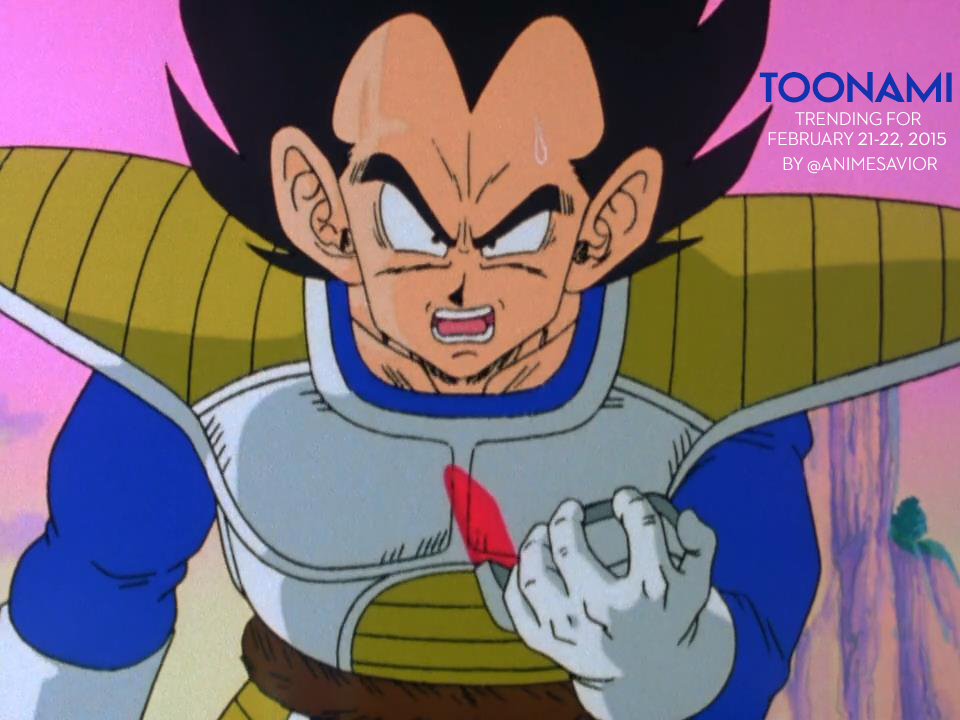 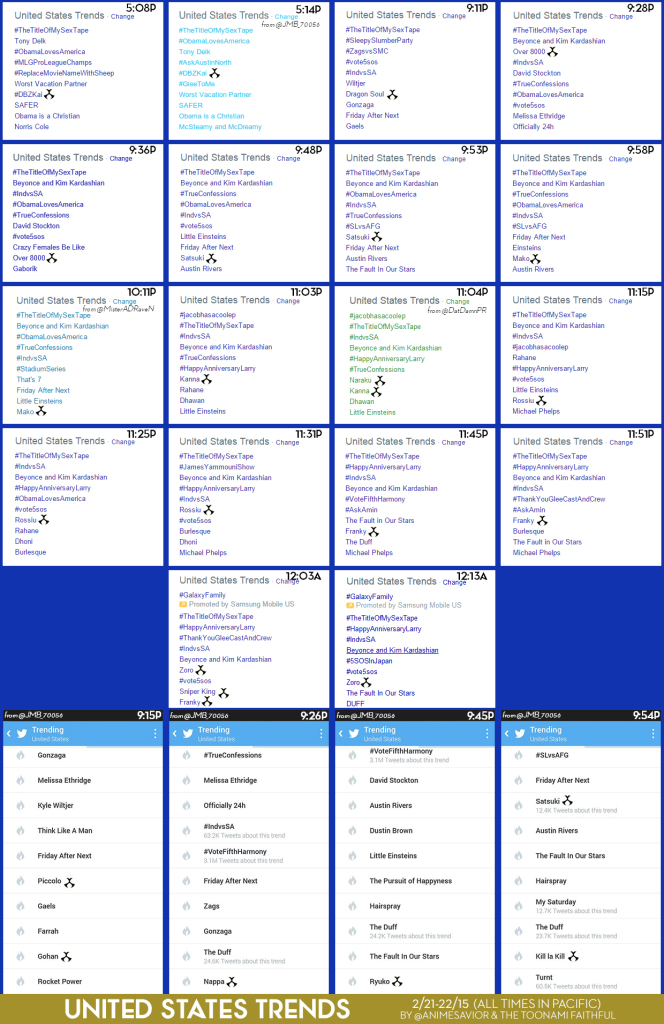 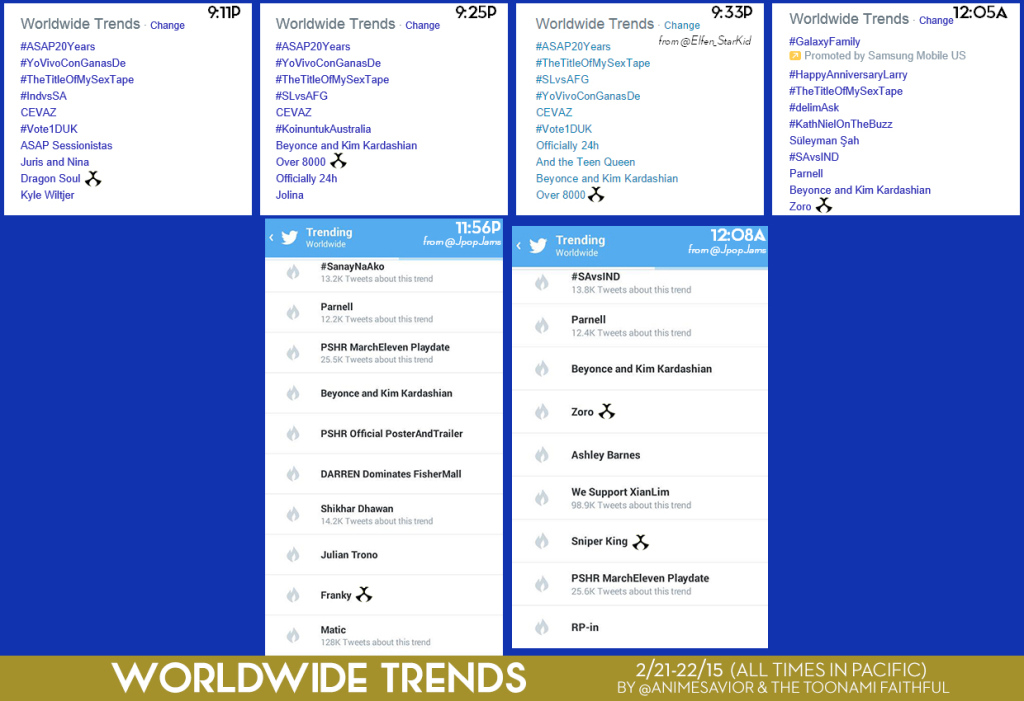 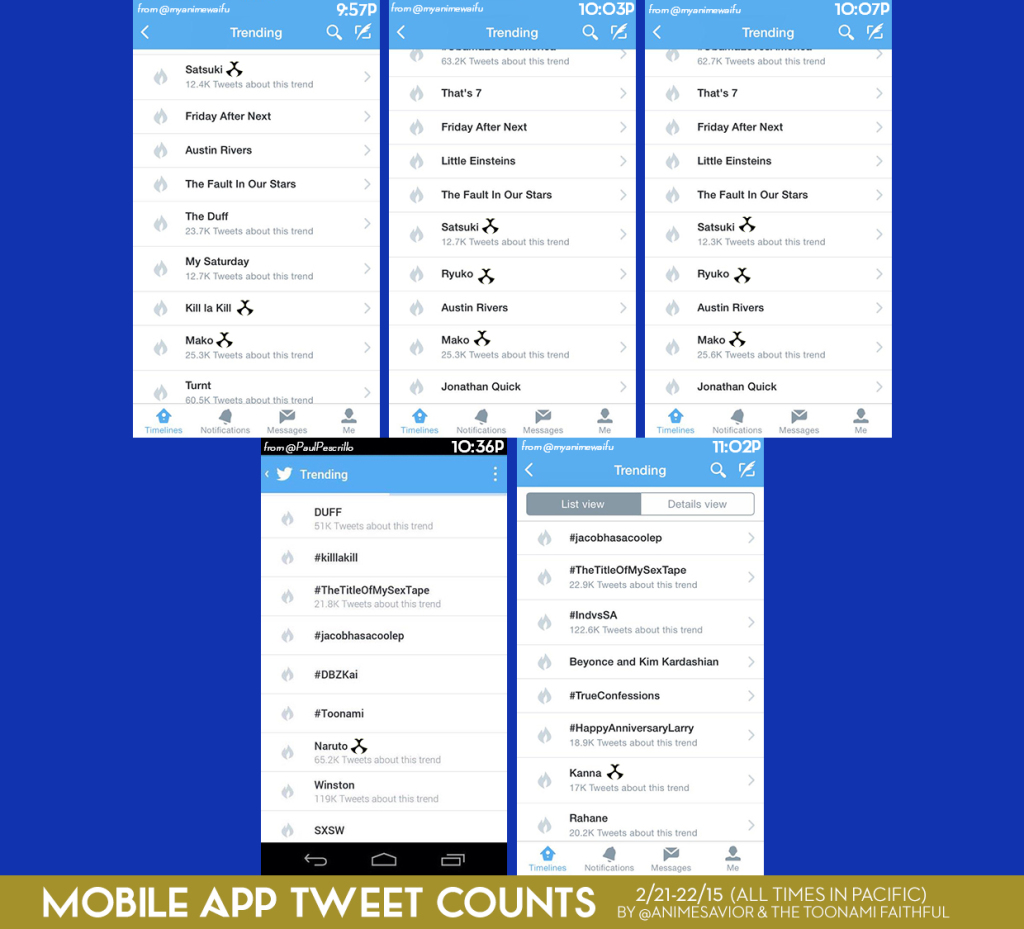 “Vegeta, what does the scouter say about [Goku’s] power level?!”

The Toonami Trending Rundown for February 21-22, 2015. It’s always a great night in the Absolution when Toonami ramps it up to over 9000 (or rather, over 8000) levels. In terms of shows, only #DBZKai (during the encore showing) and Kill la Kill trended in the US. In terms of content within said shows, every show but Naruto and Deadman managed to produce at least one of such trends.

DBZ brought us Dragon Soul, as we were treated to it’s full Opening for the first time on the block; Gohan and Piccolo, as Piccolo shields Gohan from a blast from Nappa, but at the cost of his own life; and of course Nappa and Over 8000, as Goku arrives at the scene to avenge his friends and Vegeta learns from his scouter that Goku has become a lot more stronger (to say nothing about the famous over 9000 meme). Kill la Kill brought us Satsuki, as she unveils her Kamui, Junketsu, as well as Mako and Ryuko, as Senketsu unveils that having “body shame” cannot unlock a Kamui’s full potential, and Mako attempts to help her out, so to speak. InuYasha brings us Kanna and Naraku, as Naraku forces Kanna to self destruct in order to defeat InuYasha in vein, while Kanna sends a message to Kagome on Kikyo’s glimmer within the shard. Gurren Lagann brought us Rossiu, as he attempts to repent his mistakes by committing suicide, but is stopped by Simon and Kinon. And One Piece brings us Franky, as he knocks out Fukuro, as well as Zoro and Sniper King, as they devise a plan to counterattack Kaku and Jabra.

For those that haven’t heard, Adult Swim will begin rerunning the previous week’s episode of DBZ Kai every Saturday at 8pm Eastern, with of course the new episode airing later in it’s regular Toonami timeslot at midnight. What Adult Swim plans to do with this encore showing is unknown, but I personally think it’s a great idea to help spread more awareness of Toonami to more people, and i definitely suggest you support it at the very least to showcase to the network that there can be so much more potential for Toonami and anime as a whole.

In the meantime, both Gurren Lagann and Deadman Wonderland are coming down the stretch, with their respective finales just four weeks away, which also means that the return of Sword Art Online is just 5 weeks away, and you don’t want to miss this. Until next week, stay gold as always.

Special thanks to @JMB_70056, @JpopJams, @myanimewaifu, and others I forgot to mention for spotting some of the trends on this list.

Edit @ 2/23 @ 2pm PDT: Got word of Naruto having a tweet count. Thanks to @myanimewaifu and @PaulPescrillo for the heads up.