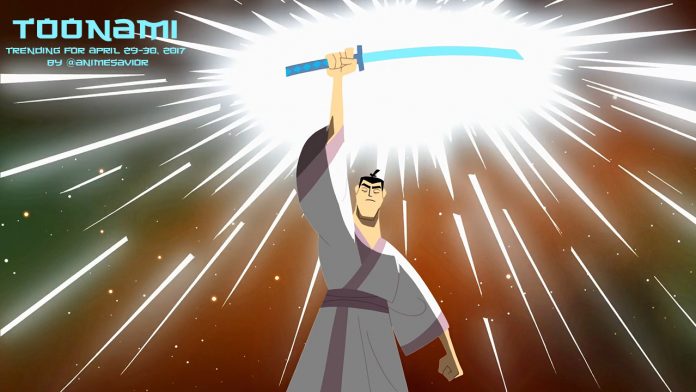 Ashi: “Jack, you got your sword…and a shave and a haircut.”

Jack: “Hmm…Yes. And you, you have been very busy. Thank you.”

The Toonami Trending Rundown for April 29-30, 2017. It was another eventful week for the better cartoon show as Jack goes looking to retrieve his sword while Ashi defends him, while Sasha and Connie return to their respective villages to warn them of the incoming Titan threat, and Tsukiyama makes his move in his attempt to get Kaneki’s flesh, among other moments.

Samurai Jack and both Dragon Ball shows would also produce a few character trends including Ashi (as she defends Jack from an army of Aku’s minions and her mother as he goes to retrieve his sword), as well as Vegeta (as he pleads to Whis to train him in an attempt to surpass Goku), and Gohan, as Dabura turns Krillin and Piccolo into stone as part of a plan to bait Gohan, Goku, and Vegeta into the ship for more energy to bring Buu to life.

This week’s feature was a video game review of Nioh for the PlayStation 4. It received an 8.5 out of 10 score.

It’s a bit hard to believe, but we only have three episodes left in this season of Samurai Jack. No doubt it will be interesting to see how these final episodes will go. As always, see you again on Saturday for another round of the better cartoon show. Later.