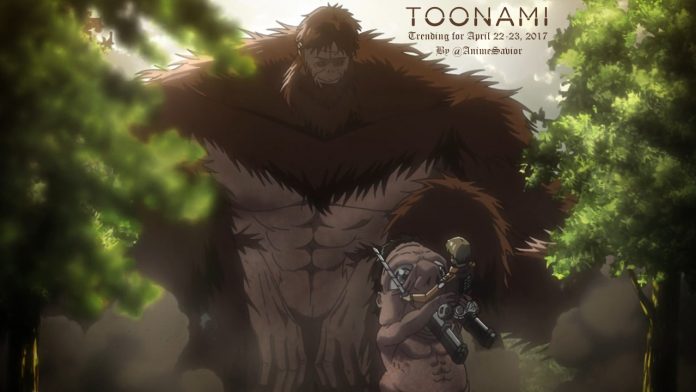 “Like hell this is [the end]. We’re not done, not yet. A person only loses when they give in. Remember that. As long as we keep putting up a fight, we haven’t been beaten.”

The Toonami Trending Rundown for April 22-23, 2017. After a 3 year wait, the Titans have indeed returned and Eren and the scouts are back to try and stop them as Toonami premieres the long awaited broadcast dub of Attack on Titan season 2.

The Toonami Trending Rundown for April 22-23, 2017. After a 3 year wait, the Titans have indeed returned and Eren and the corps are back to try and stop them as Toonami premieres the long awaited broadcast dub of Attack on Titan season 2.

And it would be worth it as we rejoin the story immediately after the events of season 1 as the Titans make themselves another opening and enter through Wall Rose, looking stronger, faster, and smarter than ever. Meanwhile, among other great moments, Jack has disappeared and Ashi goes looking for him, meeting others that he saved and inspired along the way, while the Z fighters chase Spopovich and Yamu from attempting to revive Majin Buu, and Gon and Killua meet Zepile and learn some of the tactics and secrets of the trade.

While it would be a tough night for trending with several other events being all the buzz, Attack on Titan fans have had to have plenty of patience for this show to once again grace Toonami airwaves, and I’m sure they made their voices heard, as every show managed to trend in the US during their respective East Coast airings, with Samurai Jack in particular trending in some capacity for around 3 hours. Dragon Ball Super would also trend during the prime time presentation as well. Meanwhile on Tumblr, Samurai Jack, Attack on Titan and Tokyo Ghoul would also trend.

And finally, after being off the list for 3 weeks, Samurai Jack would once again grace the list of Nielsen Social’s top 5 most talked about shows on Twitter and Facebook, making it to the #5 spot. This is the 19th time a Toonami show has made it onto this list since we started recording this feat and the 4th for Samurai Jack.

Toonami showcased a few interesting features for this week as they returned back to their 2017 look and packaging. One of such was a new indent featuring the still-to-be-named worm watching the Clydes having a duel of sorts.

In addition, Toonami also had a review of Resident Evil VII: Biohazard, which received a 7.5 out of 10 score.

While obviously not all of Attack on Titan’s questions will be resolved in these next 11 episodes, as we have several more seasons potentially in the works in the coming years, it should be interesting what this season has for us next in this storyline. All I can say for Attack on Titan, and for all Toonami shows in general for that matter, is stay tuned.

We’ll see you again next week as always, but we do wish to take a moment to send our thoughts to all those affected by the loss of voice actor and radio host Ed Blaylock, whom passed away back on April 19 at the age of 64. Ed lent his voice to various Funimation productions, including most notably voicing Full Metal Alchemist’s King Bradley and One Piece’s Sengoku. On behalf of everyone, rest in peace, Ed, and thanks for the memories.

Special thanks to @JMB_70056, @myanimewaifu, @TheNextHokage, and others I forgot to mention for spotting some of the trends on this list.