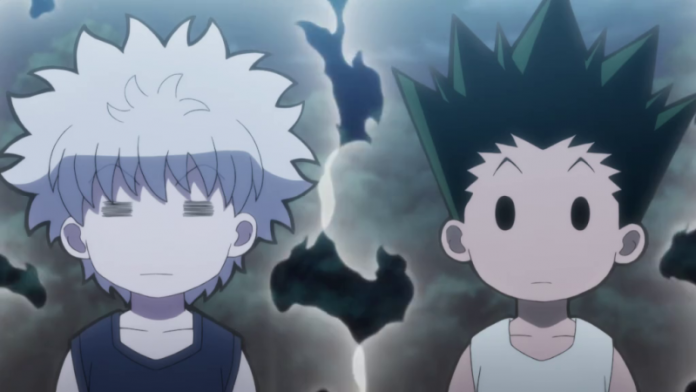 Well, Toonami fans, we’ve finally reached the much anticipated Chimera Ant arc in Hunter x Hunter. Even before the show aired on Toonami (but was announced to air on the block), fans of the series couldn’t stop promoting it. It’s widely considered the best and most popular arc for a lot of fans, and now those who haven’t seen the subtitled version of Hunter x Hunter will get to see what everyone was/is talking about. It’s an exciting time, especially for the Toonami fans who love Hunter x Hunter. Having one of the more popular shows offer this amazing story arc should help solidify Hunter x Hunter as one of the best shows Toonami has ever had (and I don’t think that’s going out on a limb). As of now, 75 episodes of Hunter x Hunter have aired on Toonami. This arc is a whopping 60 episodes, almost matching what has already been on the block (which should tell you how much content is in this arc). That’s to say, this will take a while to finish. But due to how popular and how acclaimed this arc is with fans, that length might not feel long enough to some. It’s a roller coaster of an arc that was such a treat to see adapted in the 2011 anime.

What makes this exciting is that the Chimera Ant arc wasn’t adapted in the 1999 anime series. Of course, with Yoshihiro Togashi’s medical history and how Hunter x Hunter was constantly on hiatus, they probably couldn’t adapt much of this arc, if any. In fact, the 1999 series ended in the York New City arc (at episode 62). After that, three separate OVA collections that totaled over 30 episodes were later released. So for fans in the U.S., they might not have had the chance to see the Greed Island arc, which was made up of only OVA’s at the time. I don’t believe that those episodes were available for viewing in the U.S. besides via pirating, but I could be wrong (it’s a very odd story). So being able to see something that was never adapted in the first place, becomes more memorable. So fans might have felt that way with Greed Island, but the Chimera Ant arc is on a completely different level from previous story arcs. While the arc itself is beloved because of how good it is, the fact that it was territory never reached before in the previous anime series (at all) makes this experience much more momentous. For those who might be wondering, what makes this arc so widely regarded is how high the stakes are. There is a running joke among Hunter x Hunter fans about how this series is a shōnen series (meant for a younger demographic), despite how gruesome and disturbing this show can be. York New City was a prime example of how bloody and dark Hunter x Hunter can be, but the Chimera Ant arc solidifies it. Basically (for a spoiler-free synopsis) a new species has been discovered, which have been dubbed the Chimera Ants. However, they aren’t what you’d call a peaceful species, and it’s up to Gon, Killua, and some new faces to stop them from taking over the planet. I won’t get into any other spoilers for those who want to be surprised, but just be aware that you might need to grab a few tissues. Characters will die, and there’s one death in particular that left me feeling so sick to my stomach that I had to take a couple of days off to recuperate (It was super disturbing to me!). The episode in particular that I’m referencing did a fantastic job to get the emotional reaction it did, and there are plenty of episodes like that all over this arc that will invoke many different emotions from fans (good and bad).

But it isn’t all about the emotional appeal of this arc. The fights are something to watch out for as well. Some of the more powerful characters in the entire Hunter x Hunter world show up and perform amazingly (both with Hunters and Chimera Ants). Fans will get to see some pretty star-studded battles with crazy nen powers to behold. Some might drag on for a bit, but due to how dire the situation is, I’m sure a lot of fans won’t mind. But in this arc, the nen powers fans will get to see are off the charts, and it’s pretty cool seeing the imagination used to create such powers.

So there’s a lot to be excited about. The much talked about story arc in Hunter x Hunter is about to begin. There will be memorable fights, great music that fits in perfectly, and a lot of deaths that will drive people insane (or happy, depending on who dies). It’s an arc that was never adapted before and is a true gift for those who have waited so long to see it animated. I can’t imagine how agonizing the wait will be to see this arc fully fleshed out and be rewarded for that patience. Now all of Toonami can witness why this arc is great. Is it the greatest thing ever? That might be laying it on a little thick (I’d even say my favorite arc is York New City). But it certainly adds an element to Hunter x Hunter that makes it an even better fit on Toonami.