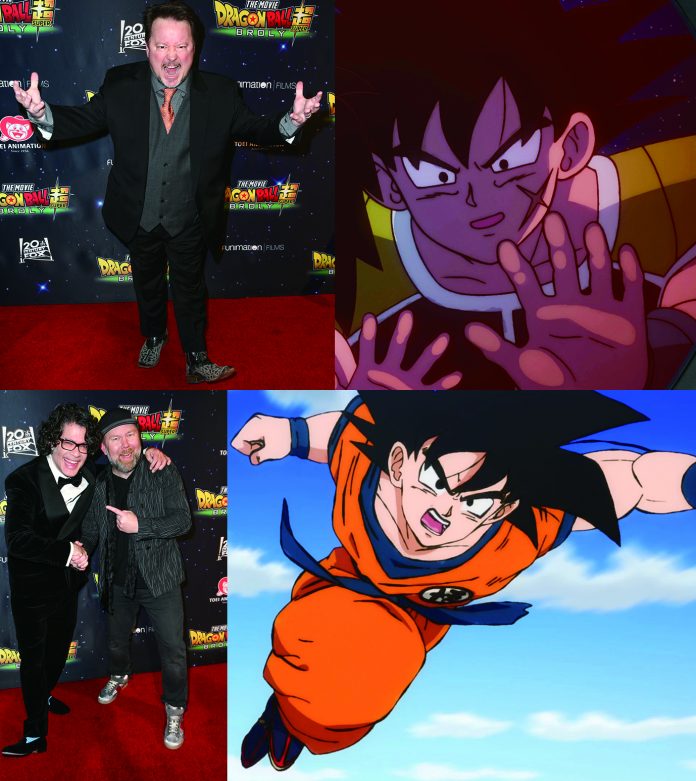 For the fourth part of our Dragon Ball Super: Broly premiere roundtable interviews, we met with Monica Rial, the voice of Krillin and Bardock, and would later in the interview be joined with Sean Schemmel, the voice of Goku, regarding their thoughts on the upcoming film as well as the franchise as a whole.

Due to time constraints, we were joined with another reporter, Yukiko Sumi from the Weekly LaLaLa, and for the benefit of both our viewers and with her permission, I have also included her questions and answers from this roundtable session as well. 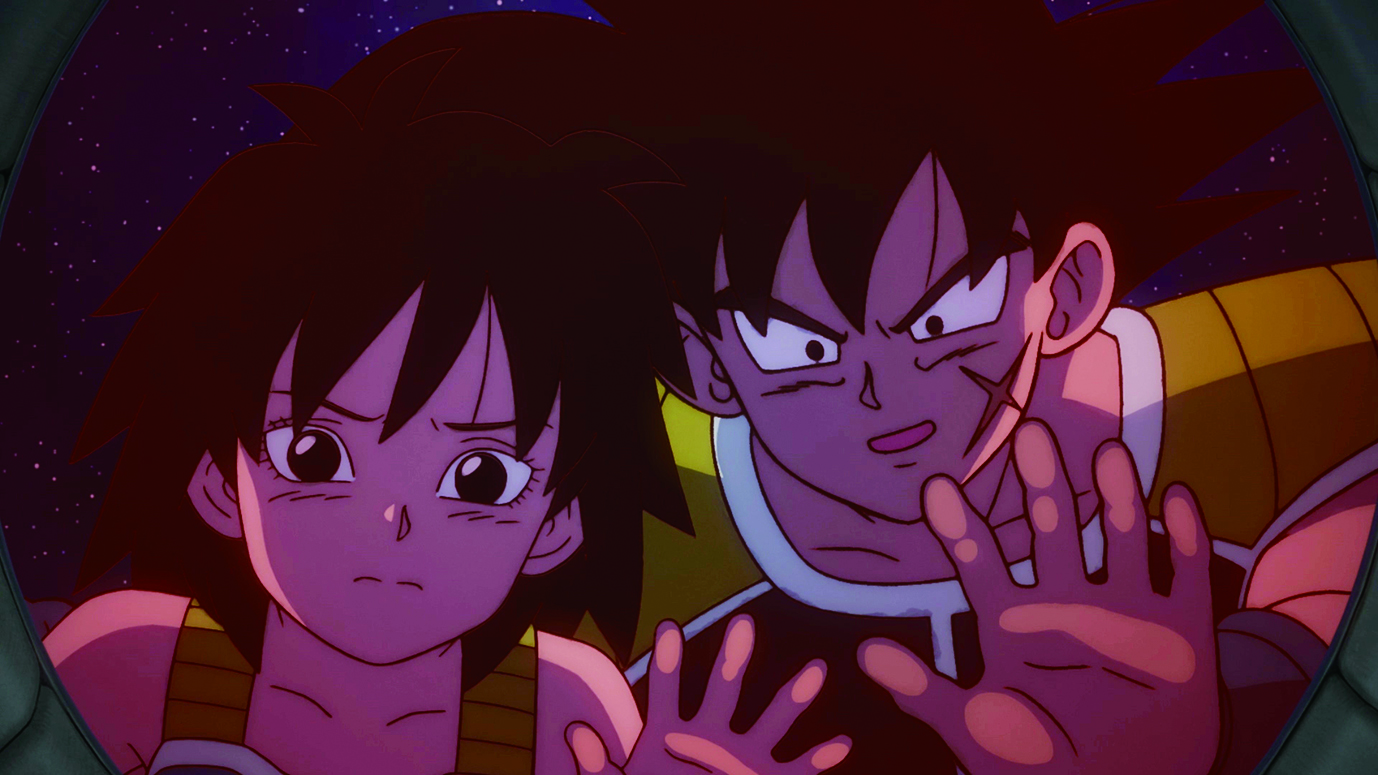 Hey, guys. Daniel Limjoco (@AnimeSavior) from ToonamiFaithful.com and @ToonamiNews, and I’m with Sonny Strait, the voice of Krillin and Bardock from Dragon Ball Super, as well as Usopp, TOM 1, Maes Hughes, among other roles.

It’s been almost 2 decades since DBZ first aired on Toonami and since you got the role to voice your character. Looking back to the days when you first got cast, did you expect that this franchise (and by extension, your career) would be the way it is today?

Sonny: Absolutely not. I thought it would be maybe two years and it would all be over. I thought it was just an anime fad and thank god I was wrong. But it’s amazing to see how it has grown. When I started, it wasn’t really an industry. It was just a few companies did dubbing and a few companies did animation here, but anime as an industry in this country was not such a thing. And it’s grown to be [a lot bigger]…because I remember when people ask me: “How do I become a voice actor” and I say: “Don’t try to be a voice actor, try to be an actor. Because you don’t know what’s going to be out there. It could be anything.” But now even trying to be a voice actor, there’s tons of work out there.

The representatives from Funimation who were moderating these press roundtable interviews then brought over Sean Schemmel, the voice of Goku, to join us. The two started out with some friendly talks, but unfortunately due to some technical issues on my end, this part couldn’t be recorded so I apologize for the inconvenience. 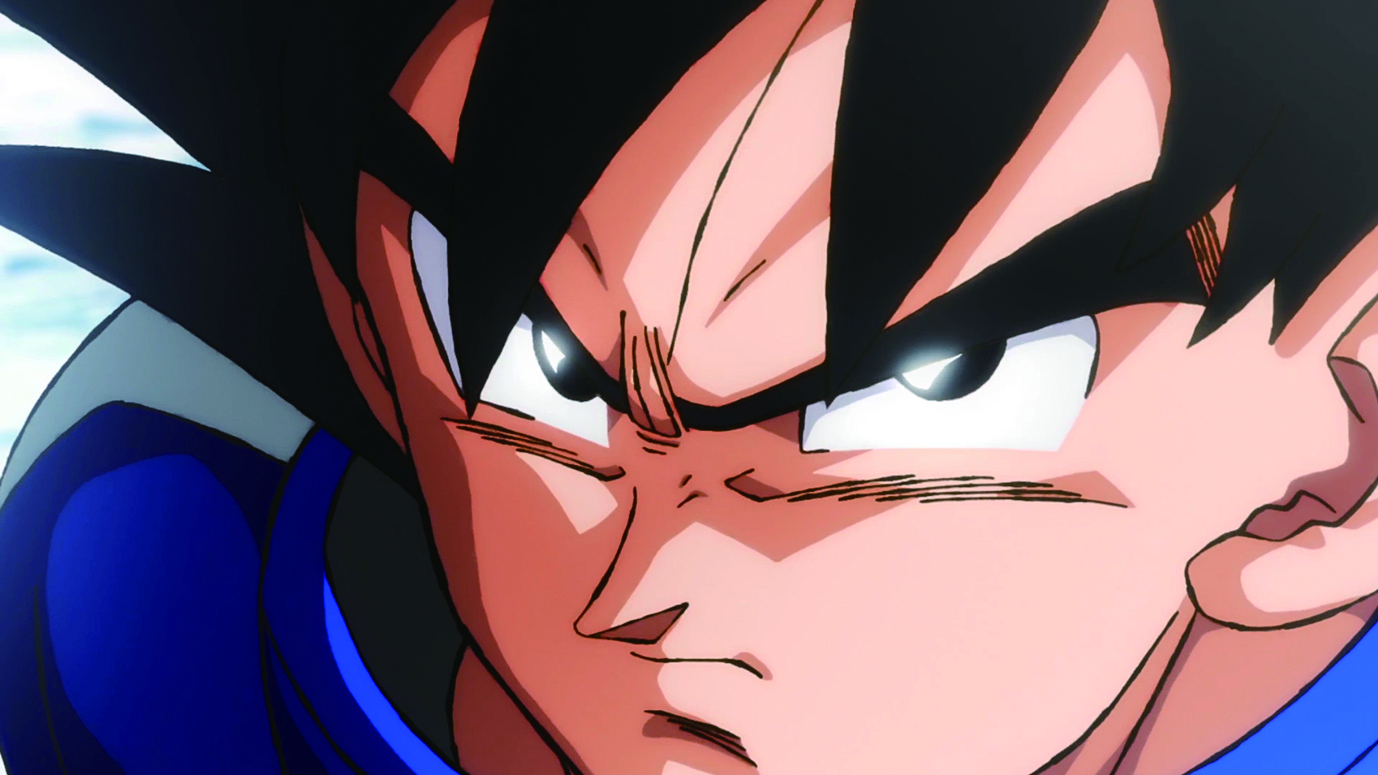 What does it mean to be a part of the Dragon Ball franchise?

Sean: It means I have to do a lot of interviews…no, I’m kidding. So I would put it this way. Everything that I have, including my girlfriend, the house that Goku built, this friendship, all of these people who are my friends, is the whole riches of my entire life that I’ve dedicated 20 years of my life to. So that’s what it means to be a part of Dragon Ball.

Sean: It’s our lives, and the fan love. […] So that’s what it means. If it wasn’t for Akira Toriyama, Japan, or Japanese culture, or anime, I’d be playing my French horn in an orchestra and I’d never know this guy. I wouldn’t get the growing I got, I wouldn’t have the girlfriend I have, I wouldn’t have the stuff I have…

Sonny: It literally gave us the career but also a life. A fascinating life, too.

Sean: Something that when you’re looking back at your life at the end, when you’re 80 if you make it that long, or 90, you can go: “It was worth it, I did it. It was not a wasted life.” That’s how I feel.

Sonny: Do you ever think that before this, before Dragon Ball, that we’d ever be like touring the world and doing this kind of thing?

Sean: I was a professional hornist and even as a professional hornist, my goal was to be the greatest player ever. So I wasn’t going to be “the greatest” at something, not necessarily famous, I just wanted to know that I put my heart and soul and my energy into something, I could compete with the very best in the world. That was just pushing pride…

Sonny: Now you’re the greatest Saiyan in the world.

Sean: I play one of the greatest Saiyan’s probably.

Sonny: And I play the greatest friend.

Sean: Yeah, the best friend of Goku. So yeah, it’s everything. It’s a big deal. So that’s the answer.

From what you have seen, what are your impressions of the film and what should fans expect going into Broly?

Sean: They should not drink soda before they go in and they should relieve themselves before they get into the theater because they don’t want to miss any of it. We’ll, also they might wet themselves. And I’m only half-joking. It’s over the top.

Sean: Let me put it this way. *raises his hand above the table* Battle of Gods. *raises his hand slightly higher* Resurrection F. *raises his hand way above his head* Broly. 3/4ths of the way through the film I thought the animators dropped acid and went to another dimension. This is the Dragon Ball movie fans have been waiting for since the 80’s and 90’s. And the OG fans, this movie is for you. The new fans, welcome to the club. It blew my mind.

Sonny: I know, that’s right. Even the style of animation is amazing. It’s like the old Dragon Ball style, but updated.

Sean: We’ll did you notice this, and I found out through an interview with Geekdom101, and he was telling me, he’s very knowledgeable about this, I don’t know if this is true so somebody might contradict me, but he told me that as a homage to Akira Toriyama, they hired 7 different famous anime artists who have helped influenced anime animate special scenes. So sometimes the animation changes slightly, I think he said Shintaro, I think was one of the names, I can’t remember, who got to come in and pay respect to Akira Toriyama’s side in helping to animate this film. I think, check that, that may not be a fact, but he’s pretty good with his information. You’ll have to check that with Japan. But I’ve heard that that’s why the animation looks different in certain scenes, especially during an exaggerated power up or anytime there’s a big emotional moment, you see the animation change slightly. Like: “Whoa what was that, that almost looks like awesome fan art” and then it switches back to Toriyama’s style.

Sonny: I’m going to keep that in mind [during the film premiere] tomorrow. 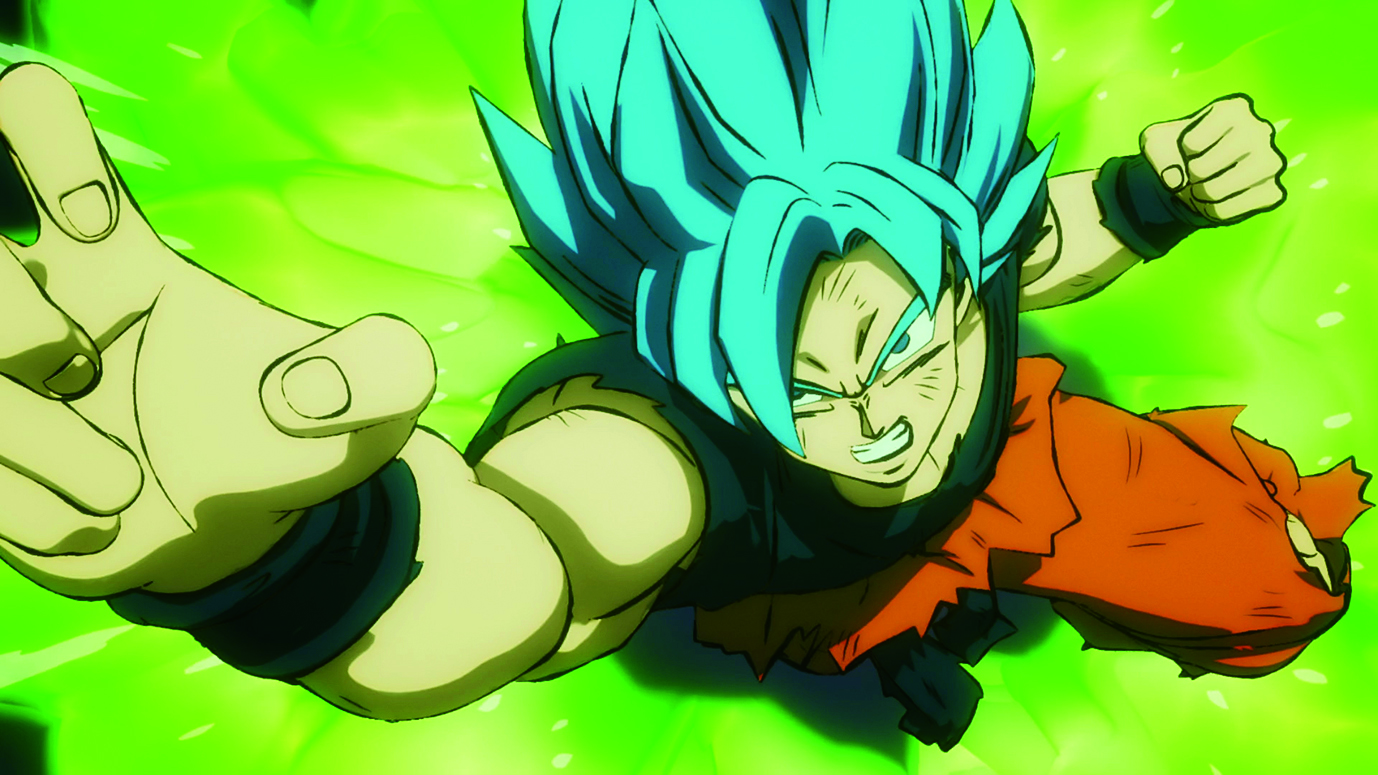 Yukiko: When did you notice that the animation had changed?

Sean: I noticed it more as the movie goes on. In the beginning, it looked like old school Akira Toriyama [style], but…

Sonny: I noticed it in the previews, I was like: “Oh, look at the animation here is like pretty old school, but it’s like really clean. I love it.

Any interesting or funny stories occur when you were recording your characters in the booth?

Sean: Hmm, interesting or funny stories…We’ll other than outtakes…gosh I’m trying to think of one as they happen. I mean, that’s so broad.

Sonny: Yeah, you know it’s always weird because they always ask you what kind of outtakes do you remember, and I don’t remember any of them. Because we do them all the time. I thought it was kind of cool that I got to do Bardock’s lines and then Chris [Sabat] asked me to come back in after they had the other actors playing off of them so I could actually go back and if I wanted to, do that line over and play off of the actors that were already there, which is not a luxury you usually get but I just happen to have a window open. It’s not interesting, but it’s cool.

Sean: Certainly not funny. I know there’s dozens of them, but I’m trying to think of one that comes to mind. They actually do exist. *Thinks for a while* Oh gosh, let’s come back to this question because I’m drawing a blank but I know they exist. I’m just so grayed out today. I didn’t get a lot of sleep.

Daniel: No worries. I think we’re running out of time anyway.

Beyond Broly, where would you like to see your character(s) and the Dragon Ball franchise go in general next? What’s on your personal wish list?

Sean: I think there are rumors of a new series. I’ve wanted Goku to shift towards being the trainer/mentor like Master Roshi, and he seems to want to train Broly at the end of the movie, so maybe Goku will fight, but more take on a mentor role, so I’m curious about that. I was also very curious about more of Bardock and Gine’s story. In fact, when the movie came out I said “I hope they have a really good Bardock/Gine storyline, and they do, but at the end of the film I wished there was more of it. Maybe a series about them would be interesting.

Sonny: I would have loved to see that.

Sean: So I would love to see that…

Sonny: I would love to see Krillin go Super Saiyan though.

Sean: He needs hair to go Super Saiyan though. Is his hair back?

Sean: Oh, yeah. He shaved his head to get back into action. So I don’t know. Maybe in Super Saiyan his dots glow? So what if he powers up and its real bad-ass in slow motion? And the camera pans close up and then they get to the Sixth dot and it’s all “Whoosh…” Like that would be cool. 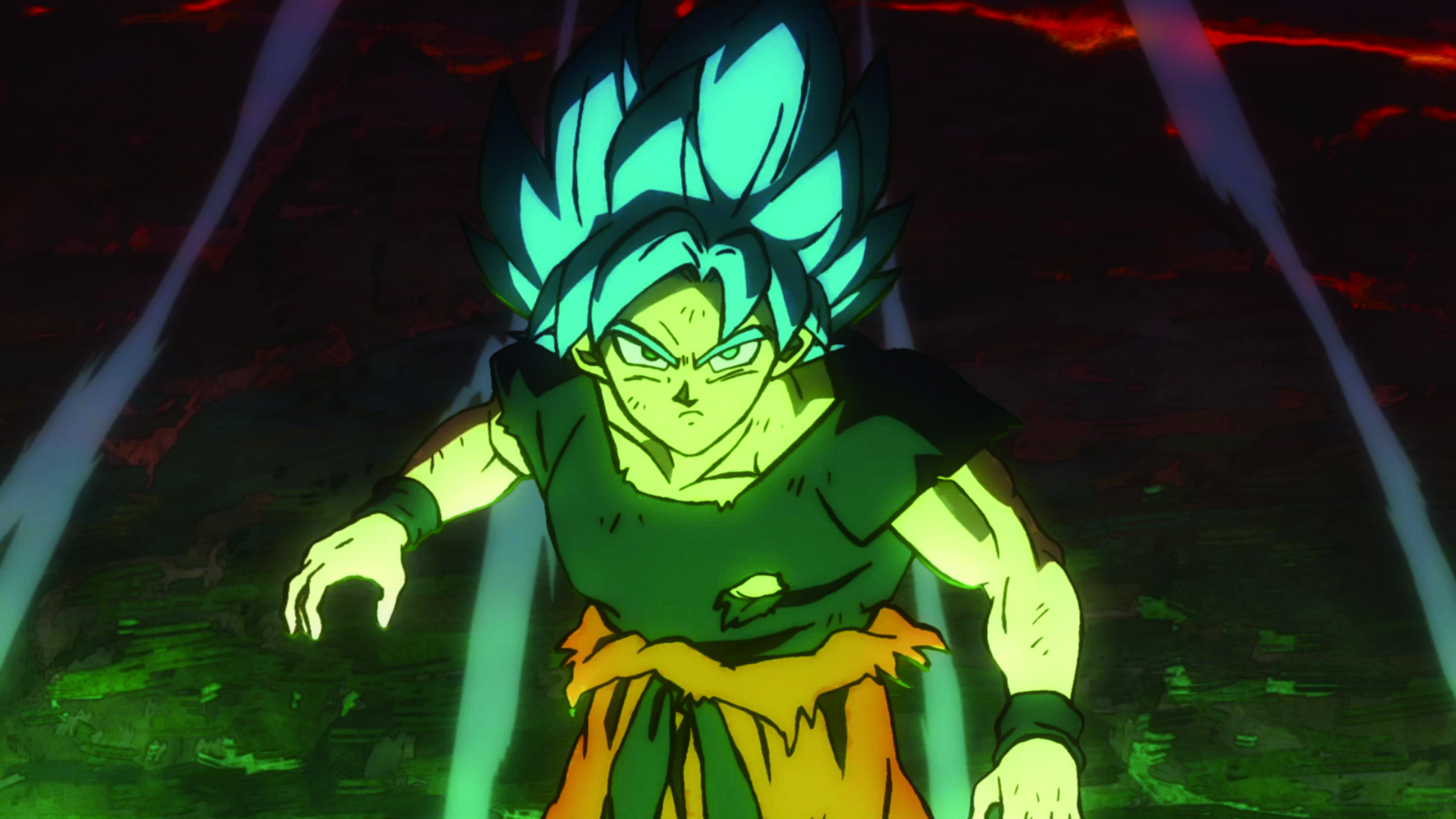 Daniel: Alright, they’re telling me I got to wrap this up, so on behalf of the Toonami Faithful, Toonami News, and DBZ fans everywhere, thanks for talking with me and to everyone, look forward to Dragon Ball Super: Broly premiering in select theaters on January 16 and keep watching Dragon Ball Super every Saturday Night on Toonami.

Images and screenshots are courtesy of Funimation.

Coming soon, the final part of our interviews from the Broly Premiere, featuring Vic Mignogna. If you missed them, check out my previous interviews with Ian Sinclair and Monica Rial and Chris Sabat.

What are your thoughts of this interview? Are you looking forward to watching Broly? Let us know what you think at the comments below or directly on our social media.