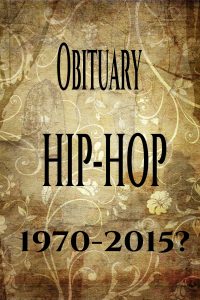 I was asked to write the Eulogy for a beautiful woman that I was…
NO!
Scratch that.
A beautiful woman that I am in love with.
She is a legend in her own right. A Goddess. She is the ultimate tease. I speak of her in the present tense because I refuse to believe the rumors of her death.
I still crave to hear her hypnotic voice whisper in my ear. Sometimes, I lay awake at night remembering that moment. The moment that swiftly passed, as if she were a spring breeze temporarily stalled by a drop of morning dew on top of a flower petal. It was in that instant, just for a nano-second, I thought she was mine!
Exclusively mine.
I was wrong. She was always a free spirit. That’s why she has so many children. Some of her seeds are gangsta, conscious, crunk, and yes…nerdy.
I feel as if I owe it to her children to avoid giving this Eulogy. At least, until the world is certain that she is dead.
Until the world is certain that Hip-Hop is dead.

The Eulogy of Hip-Hop

I may be biased…

…maybe. Honestly, I am fine with that. I know this will be hard for most of the readers out there to relate to but, here’s my confession.
I fell in love when I was 7 years old. No, not infatuation or puppy love.

I was in true, bonafide, heads-over-heels love!

Well, she’s become to be known by many different names over the years but, back then? Back then we called her Hip-Hop, Rap for short.

Now, I know what you’re thinking. This isn’t another one of those “Hip-Hop is Dead” articles . There have been rare glimpses of her as of lately. I believe Hip-Hop is very much alive.

In other words, don’t print the obituary yet.

Music barely scratches the surface of her legacy. Very few have seen her in pure form. She’s more than a mere legend.

There are four Demigods that form the body of Hip-Hop: Graffiti, Emcee, DJ’ing, and B-Boy or as it’s more commonly known, “breakdancing”.

Yes, I did say Demigods that make up the body of a goddess. If we look at Hip-Hop from this aspect, it explains why Hip-Hop was embraced by so many ethinic groups & cultures. Hip-Hop’s love for humanity transcended physical characteristics.

Who would have thought that the lyrics of a 21-year old Tunisian emcee named El General would provide the spark that lead to dictator Ben Ali’s overthrow?

Still with me? Good. Now we’re going to travel through the wormhole and go to the past!

Yes, that would make him my future father-in-law!

Kool Herc was the first DJ to capitalize on “the Breaks”. You know, that part in the song where the vocals stop and the beat just rides. Herc would buy 2 of the same record and play the break on one turntable, then flip to the other turntable and do the same! This way, the break played over and over non-stop.

Non-stop till the break of dawn…

Over the years, those turntables made love over and over again. It was inevitable that an offspring would be born from this rugged union.

Who knew she would be so beautiful?

Hip-Hop gets sexier and wiser as she ages. As a young lady, she was a protester. Angry with the world, she went through a period of rebellion and misunderstanding. As she gained understanding, she became conscious of her environment and surroundings. She became confident until times got hard during the Great Recession. She caved to the stress and pressure and ended up in “The Trap”. After a nearly fatal MDMA overdose, she recovered only to be held hostage by pirates. She had to evolve in order to survive the pirate’s onslaught. Her days in captivity lead to her unexpected transformation into a digital powerhouse!

Hip-Hop is survived by her many sub-genres.

She was the most resilient survivor I knew. That’s why I’m having a hard time accepting her rumored fate as fact. I won’t move on until I have undisputable evidence that Hip-Hop is no more. Even then, I will search the catacombs and ruins of every ancient civilization. I will search for the lost or hidden knowledge that will resurrect my first love so we can be together once more. Until then, I won’t stop looking for my lost love. Hip-Hop I will find you!