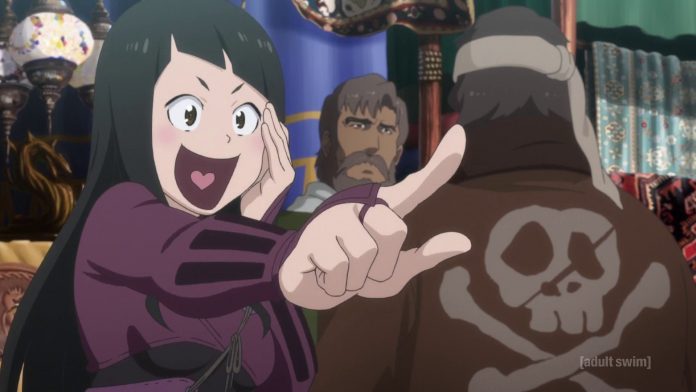 Choices have consequences, which seemed to have been the theme on the latest episode of Fena: Pirate Princess. Fena decided to escape her life of slavery and end up searching for “Eden,” which has set a lot of players in motion to come together. I’m not sure what will be on the horizon for our cast of pirates, but there’s something ominous building that was hinted a bit that has me and many fans curious about what will happen next.

Surprisingly enough, this episode doesn’t even begin on Fena; we instead see two ships (one with the government and one pirate ship), ported next to each other. Abel Sconne, who many should remember as the blonde man who kept Angie safe when Maxiver went on a rampage during Fena’s escape, is writing something and excited to see a bird deliver a note to him. He wants Fena back no matter the cost and seems conflicted with keeping an illusion of certain islands being free from control. Nevertheless, Maxiver is sent out with O’Malley (the pirate woman with him) to try and capture Fena as she and her crew head to the port of smuggler island Bar-Baral.

To Yukimaru’s dismay, Fena and the rest of her crew dock into port as they grab food, clothes, and anything they can get their hands on. It led to many hilarious moments involving Karin, Shitan, and the twins Enju and Kaede, giving more life to the series. Sure, the story felt a bit slow, considering questions are mounting since Fena took up her journey. But being able to see how wildly different her crew is, makes the experience more memorable and lasting. Considering the kind of faces Karin can make (very cute), and how much the ladies love Shitan, I don’t mind having slower story moments, especially since viewers can grow more attached to the cast. I love it, and so far, Fena: Pirate Princess has been able to find that balance between letting the story carry the audience of the characters.

And as Fena (along with Enju and Kaede) continued shopping, they found a shopkeep with a remarkably similar item that Fena received from Master Yukihisa. After a crude bartering session, we learn about the shopkeeper’s stone and how it came from Germany (in Idar-Oberstein, which is a real place) and was owned by a royal family. And it certainly doesn’t feel off considering how Fena looks and makes me wonder if her own family were the makers/keepers/protectors of these stones.

After this sequence, things start to pick up as Maxiver shows up with an entourage of female pirates, and they don’t look peaceful. The twins do their best to keep Fena safe as more bandits also enter the fray, outnumbering our heroes a ton. And when all hope is lost, Yukimaru once again exquisitely bursts onto the scene, cutting down eight men, giving our pirate captain an opening to escape. Not to be outdone, both twins shined in combat and proved to be worthy foes to this female pirate brigade. It shouldn’t come as much of a surprise that this counter-attack by Fena’s crew was the best highlight of the episode. While we’ve had quick instances of combat in the first two episodes, it was nice to have a long dragged-out battle to emphasize how multi-faceted this series is trying to be (and succeeding so far). The fight choreography was spectacular, and getting to see Enju and Kaede fight looked fun! Plus, Yukimaru carrying Fena, and jumping on rooftops to avoid gunfire, is the kind of action I live to see. Production I.G. deserves much praise for how well-animated these scenes were. And getting to see a new cast of pirates to emerged made the series more of a must-watch. We have ourselves two sides facing off, and both look alluring. Fena: Pirate Princess has nailed the art of character design, and I don’t think there will be any way for that to change.

In the end, Yukimaru is a bit injured (and shy when Fena grabbed his hand), but everyone returns safely (except Fena, Enju, and Kaede as they are bonked on the head again). But we return to Abel’s ship, where Maxiver was thrown overboard due to his failure in retrieving Fena. Holding a locket in his hand, with O’Malley pressed against his back, Abel asks out loud if “do you even have any idea who you really are.” It created more of a mystery as to what lies in Fena’s journey and her past.

Right now, Fena: Pirate Princess is teasing viewers. So far in three episodes, it doesn’t feel like much has been accomplished yet. So I can understand if some fans felt the series has been moving a tad slower than what they are accustomed to seeing on Toonami. But I’d argue that it has allowed the audience to grow with the main cast, almost as if they are a part of the group. These characters feel real, and I want to know more about them. I’m curious how Abel is connected with Fena or the stones she has collected, and I want to see his crew duke it out against Fena’s more. The character designs (as mentioned before) look stunning, and it makes it hard to have a favorite considering how cool or whacky they look. The characters have moved Fena: Pirate Princess along, and I am not complaining one bit. I hope that we get to see Fena take a bit more command because after hearing Kaede mention how they’d protect their captain or yell at a shopkeep making advances to their captain, it hit how she is the group leader. I want to see her utilize her abilities and strength to press onward. And I think we will get that sooner rather than later. But I’m wildly enjoying this series and believe it might be the best original to date for Toonami.

*This should also come as no surprise, but the English cast has been amazing these three episodes, and think that the entire crew should hold their heads high from their work on this project. Round of applause*

Rating: Intrigued at the subtle hints of the main plot sprinkled throughout the episode and amazed at the wildly original character designs.

*Of Note: the “perfect boob to hip ratio” is the best line about the beauty of a woman that everyone should remember.

CJ Maffris is Editor-in-Chief at Toonamifaithful.com. Feel free to give CJ a follow on Twitter @SeaJayMaffris as he continues to review Fena: Pirate Princess