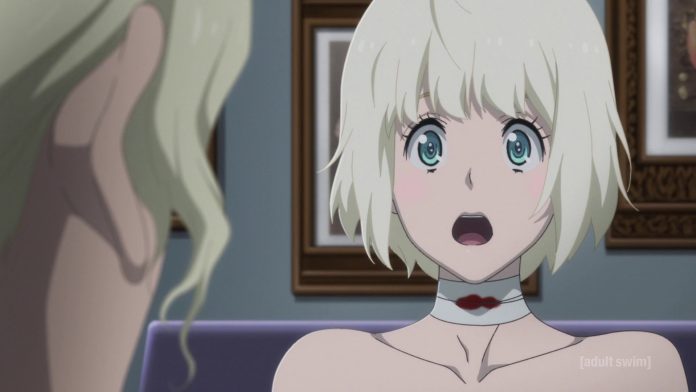 Look at what we have here. Episode six of Fena: Pirate Princess dropped some bombshells on its viewers about the lore of the Goblin Pirates, Abel’s motives, what lies in Eden, AND who Fena really is. And while fans were treated to a beautiful staredown and tension-filled moment toward the end, the true star of the episode was the audience, as a lot more of the world of Fena: Pirate Princess is beginning to make sense. Lines have been drawn, and many will have to pick a side as the story continues. It leaves me wondering what will be going down next?

We already knew Abel had had some weird obsession with Fena, considering the lengths he’s gone to try and capture her. That becomes more evident as he rudely shoos O’Malley while treating Fena as the princess he claims her to be. And while one pirate woman is storming off, the other (Fena) is left confused, learning about his search for her for 10 years.

During this time, the audience is treated to a heavy dose of information from Abel as he connects most of the dots involving Fena: Pirate Princess. Mentioning “La Pucelle” was the tip of the iceberg as viewers learn that was what people called Fena’s mother and that Abel happened to know the woman before (in great detail as well). But this leads Abel to inform Fena of the rather nasty history of the Goblin Pirates, which we heard a smidge before the last episode. Fena is warned about how much of a threat they are to her overall safety and that they only want one thing. The Goblin Pirates are hellbent on finding the legendary treasure that is supposedly vast enough to create a new country and includes one of Japan’s three significant treasures, the sword Kusanagi. The location of this treasure lies in Eden, leading me to wonder if that’s why Master Yukihisa was so keen on helping Fena find it.

And what have the Goblin Pirates been doing since Fena’s capture? Well, thanks to Yukimaru finding some explosives that didn’t detonate, he and the rest of the crew work together to place it toward a crack in the ceiling of the cave they were stuck in (a very cool scene that I highly recommend watching). It felt like child’s play as they began to plot their next move with Fena still in the clutches of Abel. Initially, their plan was to find the coordinates of Eden, which were believed to be on the stone. Still, Yukimaru, Enju, and Kaede felt that rescuing Fena would be in their best interest, to which, Shitan reminds the group of their history, how Fena’s family has deep blood ties to Eden (and why their people have helped them before), the Hope incident 10 years ago, and the mission of finding the legendary sword.

So it would appear that we have an arms race on our hands! Everything is a lot more clear considering why both Abel and Master Yukihisa seemed so driven to find Eden. This treasure is said to be a vault of the Earth, and any entity can gain so much power from it. And while this may seem a bit cliched since it’s obvious that pirates are always after treasure (look at One Piece), the stakes are now raised considering just how important it is. Abel represents the government and wants to control the “free world,” which we heard in the second episode. However, we are still in the dark as to why Master Yukihisa is after it. In many pirate series, it’s tough to tell what motivates every party, and I find that mystery so compelling and fun! It’s a real adventure and one that has to have viewers craving more!

And so what does Master Yukihisa decides to do? Now that Shitan informed him that the coordinates were obtained, he orders the Goblin Pirates to return home and allow Kei to do his work. And if anyone is to disregard this order, they will be labeled as traitors. Yukimaru doesn’t seem to care and is ready to bust out and fight for Fena. It leads to a massive staredown between him and Shitan (where Shitan even draws a sword). Shitan believes that Fena is a witch and has enchanted Yukimaru. It didn’t seem to matter to Yukimaru as he gives a huge speech about how he will never let go of her hand again and doesn’t care if she is a witch. He will save her and cut down anyone who tries to stop him.

Things become a bit more dramatic as Fena is still on Abel’s ship alone and does what she can to keep his attendant, Cody, to stay and talk with her. He reveals how Abel also saved him on Shangri-La and mentions a line Fena heard in her dream. During this time, O’Malley is drinking on her ship, angry about what transpired earlier. And when Charlotte shows a locket in her hand taken from Fena’s person (that looks similar to Abel’s), O’Malley goes ballistic (since it was a gift from Abel) and single-handedly attacks the ship Fena is on. She strikes both Fena and Cody mercilessly and begins to drag our newly addressed princess off the boat. Abel and his men all stand at the ready to fire their guns, with O’Malley calling his bluff. And to that, Abel delivers and nearly shoots her head clean off. O’Malley tucks her tail between her legs and releases Fena. After leaving, her crew encourages her to fight back (and it looks like she’s listening to their suggestions) as she yells for everyone to stand by the cannons.

Fena: Pirate Princess continues to successfully leave viewers wanting more on a cliffhanger to the point where it isn’t fair. A lot of lore was dropped on fans this episode, and while it did take a couple of viewings for me to piece it all together, I find the overall story fascinating. I wonder how others who haven’t rewatched it feel and might consider this episode a little too much in that regard. The payoff is well worth it, and I cannot wait to find out more. Abel has become a much more interesting character to me, considering how it looks like he’s playing both sides in this quest for Eden. And while he has to be an excellent ally for Fena at the moment, I don’t trust his motives. And let’s not forget about the Goblin Pirates either! They have a horrible reputation and have worked with Fena’s family due to their ties to Eden. We don’t know if it’s a mutual trust between the two sides or one using the other, but the dichotomy shown between each faction in this series is balanced out nicely.

And let’s not forget that ending. O’Malley and Abel staring each other down, where a bullet nearly cleans her head clean off. The tension was beautiful, and I smell a very bloody and messy fight on our hands. Not just by the crew of the Rumble Rose but with Kei also traveling toward Fena. I’m on the edge of my seat and cannot wait for the following episode, where I’m hoping more questions will be answered!

Rating: One dramatic staredown was all I need, this show is delightful to watch!

CJ Maffris is the Editor-in-Chief at Toonamifaithful.com. You can follow CJ on Twitter @SeaJayMaffris to hear all of his Fena: Pirate Princess insights!

Don’t forget to listen to the Toonami Faithful Podcast, as well as our bi-weekly FenaCast podcast episodes!