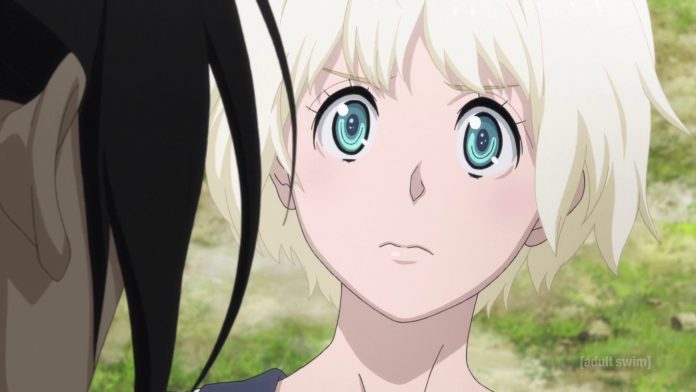 You ever found yourself not sure on what words to use to describe how you feel? Whether it be from a loved one making you feel special, a traumatic experience that you couldn’t describe after the fact, etc. That’s how I’m left leaving the latest episode of Fena: Pirate Princess. I’ve watched the episode a few times now, and I still think I cannot adequately explain why I feel the way I do after this episode. The combination of seeing Abel’s backstory and his history with Fena’s mother causes some pause for questions. Or how Fena and Yukimaru were able to crack a code on finding Eden at a lightning pace after the two were able to sing a childhood song together. It leaves me feeling overwhelmed with many thoughts racing through my mind especially considering we only have three episodes left! We have ourselves a eureka episode, and I’m just left primarily speechless. This series is fun, and while not everything about it is the best thing you’ll ever see, the journey viewers have experienced doesn’t feel real. I’m impressed a ton. So bear with me as I try my best to put the metaphorical pen to paper in reviewing the newest episode.

The episode begins with Abel sitting in his quarters, a mess, remembering some dark part of his past. Despite his mental breakdown, he could still chart a course and stay in command of his ship. Viewers are then treated to Abel’s backstory when he first laid eyes on Helena (Fena’s mother). He was entirely captivated by her beauty, and the two ended up becoming fast friends. Abel seemed obsessed with drawing her too (which could lead to some troublesome habits down the road), but it’s during the time he spent with her where we find out how Abel is the son of a king. However, he will never become king (leading me to believe he isn’t the eldest son). And while before it would appear that Abel was obsessed with a one-sided relationship, it looked like Helena had similar feelings as well (especially after seeing her head on his shoulder).

The scenery artwork during Abel’s earlier flashbacks looked like something out of a fairy tale. It was so vibrant during the spring months, and even the harsh snow backdrop was breathtaking. I’m left in awe at the ability artists have to create such beautiful backdrops in anime, and Fena: Pirate Princess spared no expense to immerse fans in Abel’s history. It gave both him and these moments more color and created a picture of two young individuals possibly falling in love! I enjoyed it profoundly and cannot express enough how incredible these sequences were!

Viewers then see what made it all go south for Abel, as Helena left with an older man (Franz), leaving him distraught. Rumors begin to swirl that our young maiden eloped with him while carrying the king’s child. A few questions soon come up, considering the type of encounters both Abel and Fena have had with one another. Are they related? Are they siblings who share the same father? Cause if so, that leaves a TERRIBLE taste in my mouth with a sibling troupe that I’ve had enough of viewing since the Fairy Dance arc in Sword Art Online. We do get a bit more answers during the scene where Abel rushes to Helena’s jail cell as she returns. He is apoplectic and does not want to be alone anymore; Abel spills his heart out, asking for her not to leave his side. Abel, throughout his life, has always felt alone. Whether due to his status as a prince or even shutting others from getting close, he finds Helena to be his only companion and feels empty without her around. Sadly this was how things were meant for her, and Helena reveals that the father “is destined to be him. For La Pucelle must be born of a king.” This conversation leads me to believe that Fena and Abel are half-siblings who share the same father.

Helena then utters the word Eden and mentions how she must go back to there, adding a more religious tone, unlike the whole treasure hunting business initially given to the audience. As it would appear that besides the Joan of Arc callbacks (especially when burnt at the stake), that Helena was meant to perish to go back to the land, she calls Eden. Sadly I did have trouble hearing the lines from Helena about if Abel would be able to see her again in Eden. The music seemed to be a tad loud while she was speaking (making the words a bit difficult to decipher), which bummed me out, considering how vital this entire dialogue between the two was. I was able to make out how Abel should run into the child of Helena; then maybe he too has a calling for Eden.

So how is Fena after we get a glance at her family history? She joins Yukimaru (of course she does), and the two chat about his injuries and the snacks she brought. Fena then begins to sing the tune of an old childhood song which catches the attention of Yukimaru as he begins to sing the lyrics of the song. He learned it from Fena back when she was on the Hope and called it her secret song, which turns out a lightbulb in Fena’s (and Yukimaru’s) head. It’s the words. The song from her childhood was the information that Fena needed to help find Eden. Events that have transpired so far are seemingly coming true, such as “the stone that shows the way” (the item she gained to start her journey), or visiting where “the maid slumbers” back when the Rumble Pirates captured her, and seeing the “cold flames” in the area where they found the coordinates in the stone. It was all there, and the two continued to decipher everything they knew to move forward in their adventure.

*More than golden, the land of the gods. Atop the lattice stage, dance, O shrine maiden. Far across the waves, the maid slumbers. What came before, southern snows, the hour of the cold flames. Waters of the darkest blue, white storm clouds they call your name. Here it is, the journey’s end, the stone that shows the way. What lies ahead is the sun setting in the east. Now is the time to run, where the ark will lead us.*

Interestingly enough, how Fena and Yukimaru come to figure out the coordinates was genius, and have to give the writing crew credit for making such a complicated hint make complete sense afterward. We got ourselves “National Treasure” the anime, and I ate up every moment. That tree stump/platform that helped decipher what was etched into that stone clue should be viewed as a clock since it can tell time AND direction. The idea is to match the time in the item with the direction in the lyrics. Sixty-one and 34 were the roman numerals on the stone, which would mean going south and east. But Fena, thinking clearly, realized how the places she visited were in reverse of the song lyrics, and the title of her secret song was vice versa. Meaning they have to go in the opposite direction of what they initially believed, reversing every piece of information they have gained.

Fena charts a course, and the crew begins their travels to find Eden! The Goblin Pirates are all set, with Fena at the helm finishing this episode in style. I’m left speechless, primarily due to how well the clues in Fena: Pirate Princess were laid out. That type of foresight is something I live for in anime and the fact that it made sense and would take some serious brainpower to figure out. But we now have a final destination for this adventure, and three episodes can lead to an explosive end.

I wouldn’t be surprised if fans were a bit overwhelmed by everything in this episode. It felt like we were given two for the price of one. They both felt so different yet played a massive part in building off one another. Abel seemed to have already known where Eden is (with Cody playing a role), while Fena and Yukimaru regale her secret song having a “brain blast” to find it. But I had to rewatch a few scenes to help get a picture of what Fena: Pirate Princess was setting up. Overall, I like that approach because, storytelling-wise, it’s genius. I wonder if other fans who aren’t reviewing it and just watching it for entertainment could catch everything that this series throws at you. So I’m left feeling excited and cannot wait to see what happens next.

Rating: The scenery during Abel’s flashbacks felt like it was straight out of a Disney movie!

CJ Maffris is Editor-in-Chief at Toonamifaithful.com. Feel free to follow CJ for all his anime and Fena: Pirate Princess hot takes on Twitter @SeaJayMaffris