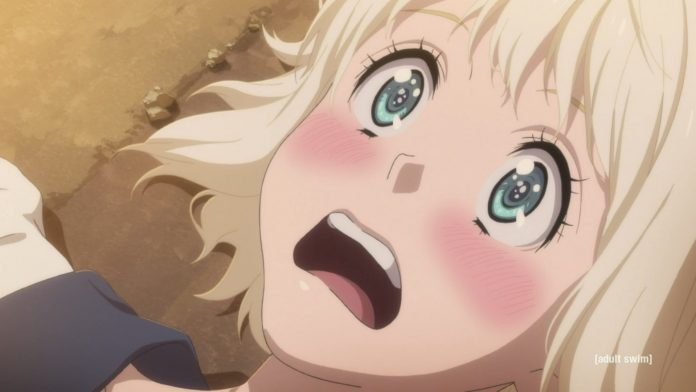 The phrase “oh no, he didn’t” comes to mind as I watched episode eight of Fena: Pirate Princess play out. Both Shitan and Yukimaru pulled out some surprises that had to of had fans losing their collective minds. And while I felt that Shitan’s admission was a nice adrenaline boost, this episode felt stilted with it staying too focused on the relationship side of the series. Throughout this episode, it felt like the plot (with the plot being Fena’s journey to Eden) was an afterthought. It wasn’t focused on at all as more emphasis was centered around a triangle of conflict brewing for quite some time. And while I wouldn’t say this episode felt weak, there were some peaks and valleys where parts held my attention and others didn’t.

Things begin as the Goblin Pirates race to keep Yukimaru alive. With him in rough shape, Fena did whatever she could to keep him breathing, with the crew making a dangerous decision on where to port. They go to Chaouen, which would allow them to be on the surface, despite that location being further than they would like. Shitan’s frustrations toward Fena seem to be growing as fans are given a flashback where Shitan was around Yukimaru a ton after he was rescued from the attack on the Hope. It gives viewers more of a window for why Shitan seems to be so close to Yukimaru and his devotion to keeping him safe. Something is bugging him, and it will come to a head soon.

Thankfully, Yukimaru recovered from his gunshots, thanks in large part to Fena. She (and Shitan) don’t leave his side (again creating tension within Shitan). While the crew thanked her for her quick thinking in using tobacco leaves, Shitan remarked how all of this was her doing to the charm she had put on Yukimaru. Due to him being infatuated with her, his desire to be near Fena caused his near-death experience, which forces Shitan to show a rather ugly side of himself—accusing her of this recent attack and on the Hope. Fena is overwhelmed by the revelation, with crewmates trying to have Shitan stop placing any misguided anger on her.

At this moment, Shitan informs everyone about his mission, about keeping Yukimaru safe by any means necessary (including killing Fena). It would appear that Master Yukihisa is only interested in keeping Fena around is because her memories are the only way to reach Eden. And learning of this secret mission causes a massive rift within the entire crew. And it was during the flashback with Master Yukihisa that left an odd impression on me. Hearing his explanation on how Fena is a witch felt a bit tasteless, considering it just mentioned how he’s seen women make men go crazy due to their feminine wile. There wasn’t an actual tangible reason to believe this. So I retort that, yeah, men do crazy things when they are attracted to anyone. That doesn’t mean anyone is a witch. And so, I’m curious at how this witchcraft toward Fena is explored to give a more tangible thing to it. Cause right now, it feels that Master Yukihisa is upset that Fena is attractive and that someone from his organization (Yukimaru) would instead follow her than him. And it’s a plot device that has been used countless times (one that comes to mind is The Crucible). So this isn’t to say that what Fena: Pirate Princess is doing is inherently bad. I just needed more on this front cause, on the surface, I didn’t get enough.

Viewers are then taken to see flashbacks of Shitan and Yukimaru as they train to become better warriors. We all knew how gifted Yukimaru was with a blade and how Shitan mentioned how hopeless he was with a sword. I think this compassion to Yukimaru shaped Shitan to be the way he is, especially with Kei demeaning him repeatedly. Shitan began to feel worthless, and thankfully to Makaba’s “reject” bows, Shitan was able to find some peace that maybe if rejects join together, something good can happen. And during a rather sweet moment between Shitan and Yukimaru about listening to the bow and arrow instead of forcing it, we see how Shitan nails a bullseye and finds something he can be decent at for his friends.

Later on, Fena rushes to find Shitan (thanks to the real star of this series Brule), and the two have a passionate discussion about their relationship. How Shitan has to kill her and that Fena believes he wouldn’t. Fena pleads her heart about how so many titles have dropped onto her and is overwhelmed by the attention. She starts to argue how she can’t be a witch, considering how she can’t use magic to fight with a bow and starts chastising Shitan for not training her properly and how it will look poorly on him as an instructor. And I have to give a hat tip to Brittany Cox’s performance; it was such a treat! And after a cute moment of him pinching her cheeks, the two seem to be back on friendly terms like before.

Yukimaru finally awakens with Fena sleeping on his legs (and bonks her on the head). Fena was asked to explain all that happened after being captured and if she and Shitan had made up from earlier. The two have their own heart-to-heart talk about the future and how they both want to travel to Eden and that Fena isn’t sure who she is (with all the titles that have been dropped on her). Fena even went as far as to say she might not want to travel to Eden and would rather sail the seas with everyone. She doesn’t want to move forward and change who she might be. Yukimaru again states his loyalty to Fena and kisses her hand (much like Abel), giving the series one of the cutest reactions to a kiss I’ve seen in an anime. I lost my mind at her reaction as it was nice to see her feelings reciprocated. However, the episode ends with viewers seeing Abel working on another painting, stating he expects to see Fena soon.

Like I mentioned before, not much happened in this episode plot-wise. It was great to have Shitan voice his feelings and state his mission to everyone due to how much it weighed on him. I felt that this distrust was resolved a bit too quickly? And the looming threat of Kei coming also seemed to be a non-factor in the episode, which feels off considering how scared the crew was at that prospect. But, a quick resolution between Fena and Shitan isn’t a terrible thing. I like how the two were opened to talk (despite Shitan earlier telling her to go away). If executed right, this revelation, and pseudo quick resolution could play a part down the line leaving Shitan with some challenging and dramatic choices as the series is getting closer to finish.

But the whole finding out Eden narrative felt like it took a backseat and was only casually mentioned during Yukimaru and Fena’s discussion, almost as if it was to remind fans that “yes, this is still a thing.” Before now, I felt that Fena: Pirate Princess’ storyline was straightforward and had some beautiful twists and turns. Yet here, it seemed TOO focused on the interpersonal relationships to where I was fading in and out. Other series have done stuff like this, such as Re:Zero’s first season, where Rem gives a rather emotional speech to Subaru for over 20 minutes. It was compelling and left me in tears, and here didn’t give me the same thing. Fena’s talk with Yukimaru did. But her and Shitan making amends did not. Cute moments galore, but not giving me the same emotional response as I got later.

It was great to see Shitan’s character fleshed out more. This aspect was my takeaway from being the biggest strength of episode eight. Everyone knows of his mission, and while his persona is more of a playboy, seeing his raw emotions and how ugly (especially the anger) it is, I find seeing him come to peace better for the story in the future (even if I think it was resolved a tad fast). Viewers get a glimpse of the hard life he had growing in the shadows of both Yukimaru and Kei. And while his projections toward Fena are downright cold, we see why that is and what motivated his actions. It did come together nicely, and I’m pleased with what Fena: Pirate Princess continues to do in building characters. And I found the acting from Nicholas Corda to be fantastic, especially during the hate-filled lines Shitan uttered. I hope we see more from other crewmates, but this is a solid start.

So, where does that leave me on this episode? A minor bump in the road, not every episode will leave me screaming, begging for more. Well, this one did, but because I felt this episode was drawn out a tad. But to be fair, I think some critical foundations have been laid for viewers with Yukimaru pleading his allegiance to Fena, Shitan revealing his mission, and seeing a bit into Master Yukihisa. He seems to be less trusting by the episode. So it’s these devices that continue to keep the interest in Fena: Pirate Princess, which is something you’d want! And yes, this review is a bit negative compared to how Fena: Pirate Princess has been earlier. But I’m still looking forward to what will happen in the next episode!

Rating: Fena’s reaction to Yukimaru kissing her hand is the best face of the series! Nothing will beat that!

CJ Maffris is Editor-in-Chief at Toonamifaithful.com! Feel free to follow CJ on Twitter @SeaJayMaffris to see all of his Fena: Pirate Princess takes.

Don’t forget to check out the Toonami Faithful Podcast, your number one podcast to hear all the latest news on the block as well as commentary involving all things Toonami!